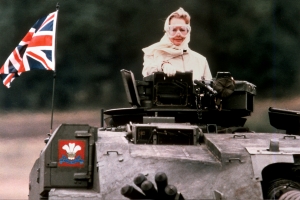 To my brand-new chum, Sarah Palin.

Of course I would be happy to meet with you during your upcoming trip to London. We have much to discuss: how to destroy socialists, carry on Ronnie’s legacy, and shut up unpleasant women’s libbers. Who cares if they say conservative women can’t be feminists? We can be leaders of the free world! But let me tell you, my girl, you are young and green and have much to learn.

First, let me assure you that while I never posed in running shorts or, God forbid, a swimsuit, I was quite the sexpot of my time. Oh, yes, I was. I can say it now, at 84. I know what it means to be ogled, desired, to watch men drool as I speak. “Keep your eyes on my face,” I wanted to shout, so many times. All those journalists who wrote endlessly about my long legs and peachlike skin in the 1970s. Oh, they forget now, but I haven’t. Ask that Christopher Hitchens. Just after I became leader of the Conservatives, he described me in the New Statesman as “surprisingly sexy.” (“There’s nothing surprising about that!” I wanted my husband, Denis, to say, but he didn’t.) A few days later, I met the young upstart at a party. He tried to challenge my command of our Zimbabwe policy. Ha! (He still thinks he is right, he says in his new memoir, Hitch-22, the rotter. Let it go, Hitch.) He admitted he was stupid-or wrong, rather, and bowed to me. Do you know what I said, my girl? “Bow lower.” He obliged. Then I said, “No, no. Much lower!” I then spanked his arrogant bottom with rolled-up paper and told him he was a naughty boy.

And that, my dear, is how to treat men. You shouldn’t skin moose-you should skin men! Not that they will like it. Helmut Kohl said I gave him headaches. Jacques Chirac asked journalists if I wanted his balls on a tray. Ha! I didn’t even know he had any! As I always said, one thing politics taught me was that men are not a reasoned or a reasonable sex. I still filled my cabinet with them, but what choice did I have? John Biffen said it best: I was a tigress surrounded by hamsters.

I do have some questions for you, though, Sarah. Why on earth would you call yourself a feminist? I always said I never owed anything to women’s lib. I practically invented women. How I used to laugh when they jumped up and down, all purple in the face, when I froze child benefits and scolded them about the “chaos” of workplace nurseries. Horrible places. Nannies are much better. I couldn’t make head nor tail of their muddy-minded debates about feminism. Who needs labels when you have tanks? They wanted me to show I cared about women. Well, instead I just showed them what a woman can do when she doesn’t waste time arguing about nonsense. I just poured myself a stiff gin and got on with the job of rescuing Britain from a deep recession, greedy unionists, and debt. Horrid stuff.

And now your country is in a pretty mess. But there’s no question of defeat, and you should never, ever quit. So what’s with this quitting-your-job business? As governor of a state where you said you could see those dreadful Russians? Ronnie and I gave them hell, rest his soul. Frankly, you could have done with a bit more experience, too. I had studied chemistry, practiced as a barrister, and had 20 years’ parliamentary experience before leading my party. You shouldn’t even think of working in the media: most journalists are blubbering fools. I am terribly fond of Rupert, but forget about Fox. Parliament-or Congress-is the only show in town.

So you do have some work to do. Most important, you must know a lot more, not less, than everyone you come into contact with. Repeat after me: facts, arguments, and figures. Also, just quietly, don’t get too hung up on religion. No one would give a damn about the Good Samaritan if he didn’t have any money. Pennies don’t fall from heaven; they have to be earned here on earth.

I know those women’s libbers are still yapping away about how my success was symbolic: it did not result in material gains for women; it just made me look good. Let me tell you, Sarah, there’s nothing wrong with that. I saved the country! I ushered in a time of prosperity, deregulated the financial sector, and was victorious in the Falkland Islands. I was Britannia, Boadicea, a Warrior Queen. I transcended gender. No, I redefined it. Just ask Geri Halliwell: I was the original Spice Girl, she said. Geri would like you too-you have created some excitement over there in the New World. But you must never forget, Sarah, that being powerful is like being a lady. If you have to tell people you are, you aren’t.
See you soon for tea.