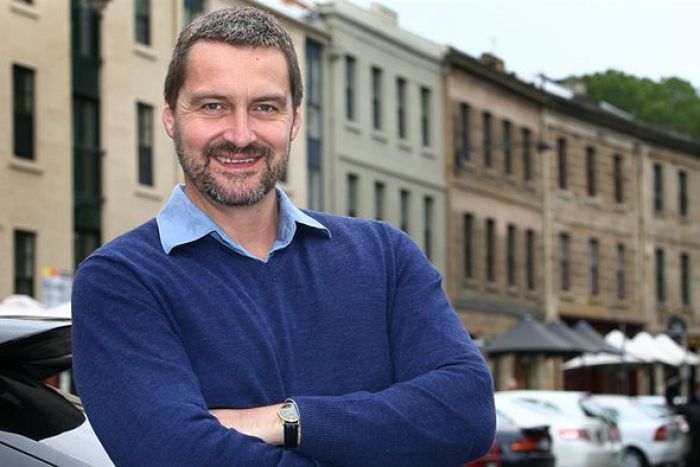 PHOTO: Rodney Croome says he always means what he says, which he attributes to his parents being fairly straight-forward dairy farmers.

In this edition of Anything But, Julia Baird and LGBT rights activist Rodney Croome talk Tasmania, Earl Grey tea and not trying too hard.

Rodney Croome’s voice changes when he talks about the dairy farm he grew up on in the north-western corner of Tasmania.

Most of his answers looped back to this in some way: the farm shaped the way he loves his tea (milky), his dislike of insincerity, his love of home. It sparked a discussion about belonging – how important it is, and what it means to clap eyes on a place where you were happy once. Or, perhaps, what it means to find yourself in a community where you feel understood, or where, in Croome’s case the world turns from black and white to rainbow.

Croome, a widely respected LGBT activist and academic, is a man with a poetic twist who makes you think. I asked him about Anything But the politics of marriage equality, and discovered he has a secret fondness for a Scottish musical instrument…

Can you tell us about whether you have a happy memory that you always return to and think about?

The day I first told another person that I was gay. It was to a student councillor at the University of Tasmania, and I was having some problems at uni and it was all down to the fact I was unhappy with the way things were. I felt sort of closeted and I hadn’t faced up to who I was.

I went along to the counsellor and, ah, eventually we got to the root of the problem and I said, “look … I think I might be gay”. And it was such a little thing to say and his response was, “oh is that it?” But for me it was just the biggest weight off my shoulder and it was like … it was like up until then the world had been black and white, and all of a sudden someone switched on the colour. It was just the most wonderful moment. It was a very happy memory to have had the courage to do that and it’s always a reminder for me, I guess, of the importance of being true to yourself.

Do you have something you love looking at?

You come up over a hill and you can see Bass Strait in the distance. You can see this beautiful chocolate brown soil that is so rich, and these little old farm houses. There will be a couple of old wooden country churches in the distance, fields of waving poppies and wheat and then Mt Rolland, which is a very imposing mountain, just off in the distance, and mountains marching off into the horizon.

Did you also have that feeling when you came out as well?

Yes. It was just such a relief and such a wonderful thing to be around other gay people who knew what it was like and knew how you felt. You didn’t have to explain all the time, you didn’t have to justify yourself all the time. But at the same time, like I said, growing up on a farm, land and landscape is important to me. And the people I grew up with are important.

When I came out, because there were the laws against homosexuality in Tasmania, there was a divide between being gay and being Tasmanian, and I really wanted to bridge that. I wanted to feel like I could belong in Tasmania as a gay man. And that’s really my fundamental motivation for what I do.

What is the best decision you’ve made?

The best decisions are always the ones that were the hardest. I had a lot of fear and doubt about whether, years ago, we should take a case to the United Nations against the old Tasmanian Law.

There were plenty of very eminent people, even Michael Kirby, who said that we didn’t have a hope, but I thought, “no, we’ve got to do this”, and that was a decision that I look back on with great pride. But another one, I guess, is deciding that the man I am currently with, my partner of almost a decade now, when we started going out, that he was the one.

What are the qualities you most value in people?

Sincerity. I always mean what I say and I put that down to my parents being fairly straight-forward dairy farmers. I assume other people when they say something they mean it too, but I’ve discovered over the years that that’s not always the case. And I really find it hard to deal with insincerity. Which is probably why I’ll never be a politician.

I lobby politicians and I talk about political issues but I don’t think I would ever be in parliament, because you do sometimes, it seems, if you’re a politician, need to hide the truth, or shift it a bit, or put a bit of a spin on it. I can’t do that. I’m congenitally incapable of that.

Do you have any routine or habit that you regularly carry out?

I’m a bit of a creature of habit. Every morning when I get to my office, which can be quite early, after I’ve been to the gym, I make myself a cup of Earl Grey tea. It will always be very milky, I guess that’s the dairy farm again. And I do that day in, day out, every day.

I love having that cup of tea there.

My partner convinced me that I should put a little bit of turmeric in with it. Apparently that prevents Alzheimer’s. Initially I though it was absolutely disgusting, but now I’ve got use to the taste and it’s quite nice.

How do you think you’re different now compared to your twenties, for example?

I was extremely earnest (laughs). Now, what I’ve learnt, since then, is not to over think and not to try too hard. There is a certain level of effort that gives the best return. Whether it’s a day-to-day task, whether it’s putting energy into your relationship, whether it’s writing or any kind of creative task. Whatever it is that you’re doing, don’t try too hard. I think I used to try too hard and exhaust myself unnecessarily. And also, not really get the balance right, but … I am now.

Are you a dog or a cat person?

I’ve never really had domestic pets. We live in South Hobart, not far from the forest that goes up Mount Wellington, and there are lots of Pademelon around, which are a little species, like little wallabies, endemic I think to Tasmania. And sometimes we might have half a dozen of them in our back yard. And my partner didn’t grow up in Australia, he’s from another country and he just finds them delightful. And they are, it’s lovely seeing them with the little joeys hopping around, hopping back in their mothers pouches and they’re gorgeous. So I’m happy with the Pademelons.

So what do you do, to get you through times if you’re feeling low?

I will return to the composers that I love, like Beethoven. I remember the Tasmanian Symphony Orchestra came to my primary school at Sheffield, a little town south of Davenport. They played Beethoven and it was such a revelation to me that there could be such magnificent and moving sounds in the world and I’ve never looked back.

I also play the bagpipes. I find that people either love the bagpipes or they hate them. But I don’t care about that. I love playing them and when I’m down, I find that that lifts me up. Making something, making those sounds and thinking yes, I can do this, I can play this.