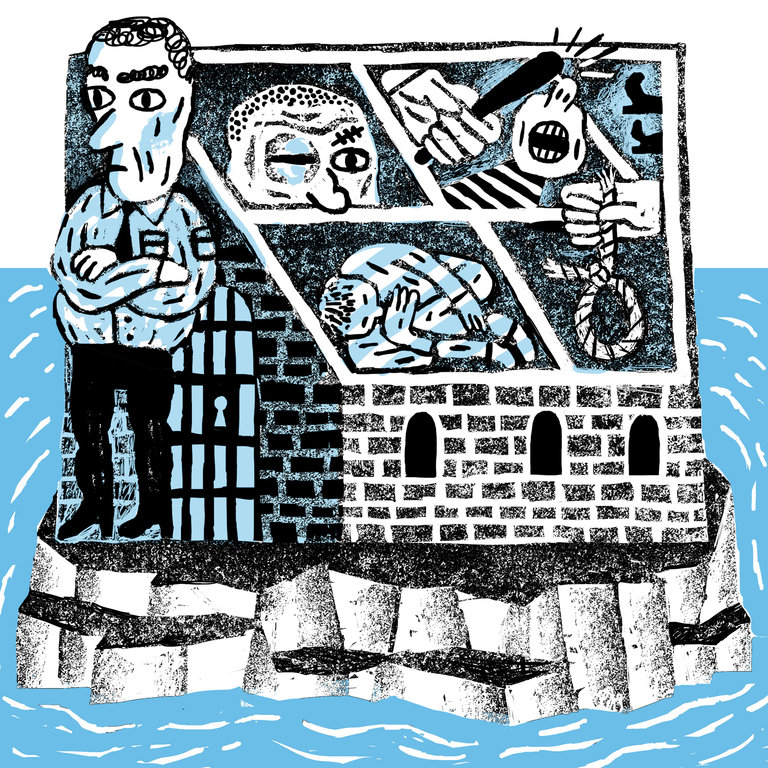 SYDNEY, Australia — In Dante’s view, the unfortunate souls who dwell in purgatory may suffer excruciating pain, but the promise of their final destination is clear: paradise. Those who languish on the remote, tiny islands — Manus and Nauru — that host Australia’s offshore immigration detention centers are not so lucky.

Although a majority of the inmates have been determined to be refugees, Australia’s policy is to not allow any who arrived by boat to settle here. So the ultimate destination of these asylum seekers, who have come from as far afield as Afghanistan, Iran, Myanmar and Sri Lanka, is unresolved. This means they are effectively in indefinite detention for committing no crime. And this uncertainty about their fate has driven hundreds to savage despair, even self-harm and suicide.

Allegations of rape, abuse, neglect and mistreatment at these centers are now legion. The full scale of the problem has been hidden because journalists are routinely denied the expensive visas to visit the islands and have been barred from the centers themselves. Those who actually work there, including doctors and counselors as well as guards, face a possible jail term if they break confidentiality rules.

Thousands of files from Nauru — a remote island republic that is the smallest nation in the South Pacific — recently published by The Guardian documented reports of sexual assault, child abuse, suicide attempts and unraveling mental health among detainees from 2013 to 2015. They were horrifying in their details: guards slapping children, bartering for sexual favors; women raped; detainees attempting suicide and cutting themselves with sharpened pencils.

The immigration minister, Peter Dutton, said the claims were being investigated but called them “hype” and blamed “left wing” media outlets. He claimed to be aware of some “false allegations of sexual assault, because in the end, people have paid money to people smugglers and they want to come to our country.”

Many Australians were less sanguine as they digested the fact that more than half of the complaints of abuse and mistreatment involved minors. Criticism of these forbidding outposts, known as regional processing centers, has swelled into a chorus of complaint — with a growing sense that this solution of offshore detention has failed to protect basic human rights in both conception and execution.

There can be no denying, though, that along with the policy of turning back any boat arrivals, offshore detention has been an effective deterrent; the number of people arriving by sea has dropped from thousands to almost nothing.

In 2009, 5,609 people traveled to Australia in tiny cramped boats, seeking refuge. By 2012, it had rocketed to 25,173. Kevin Rudd, the prime minister at the time, vowed that no one who tried to get here by sea would ever be allowed to settle. The opposition party successfully ran on a slogan of “Stop the Boats” in the next election, and by 2014-15, the numbers were down to 158. Now it is virtually zero. And the success of this approach has meant the number of people in detention more generally has plummeted: in 2013 there were almost 2,000 children in onshore and offshore detention; now there is little more than a hundred.

And yet the question now is: At what cost has this been achieved?

Abuse accusations aside, the policy is costing Australia billions of dollars. For every detainee housed on the island of Manus, which actually belongs to Papua New Guinea, taxpayers have shelled out more than $1 million since 2011. At the end of June, there were 854 detainees in the men-only facility on Manus. Those on Nauru numbered 442, including 49 children and 55 women.

There may be some relief ahead for the Manus detainees, 98 percent of whom have been declared refugees. In April, Papua New Guinea’s Supreme Court ruled the detention center unconstitutional, forcing the Australian government to agree to close it.

The detainees on Nauru, however, remain in a limbo of permanent temporary status. Although over three-quarters of them have been declared refugees, the Australian government has failed to resettle them.

How could a seemingly tolerant, multicultural, open society like Australia’s — which previously welcomed thousands of Vietnamese refugees, or “boat people,” in the 1970s — consent to a system condemned by the United Nations as a contravention of human rights, approaching torture?

Australia first began sending refugees to Nauru about 15 years ago, after the then prime minister, John Howard of the conservative Liberal Party, refused to accept a group of mostly Afghan asylum seekers who had been rescued from a sinking boat. Mr. Howard was trying to slow the momentum of the populist politician Pauline Hanson, who was swiftly gaining support for her anti-immigrant, anti- Asian, anti-Islamic message. Ms. Hanson was just re-elected to Parliament in August, and her One Nation party also picked up three additional senators.

Mr. Howard tapped into undercurrents of xenophobia by campaigning on national sovereignty, saying, “We will decide who comes to this country and the circumstances in which they come.” The influx of people crossing the sea to find refuge in Australia thus became a partisan issue in which the two major parties, Liberal and Labor, competed to pander to anxieties about immigration.

Asylum seekers who had arrived by boat were demonized for “jumping the queues” by paying smugglers, ahead of people in refugee camps in other countries who had applied for resettlement in Australia. Unfairness is deeply offensive to Australians, and the stereotypes stuck. A 2014 opinion poll found that most people mistakenly believed that those who arrive by boat are not “genuine refugees.”

Three years ago, the minister in charge of the Department of Immigration and Border Protection, Scott Morrison, directed his staff to refer to asylum seekers who came by boat as “illegal maritime arrivals,” even though their actions are perfectly legal under international law. (This concept of illegality has proved remarkably effective in shaping public attitudes.)

The official rhetoric has also been militarized, with a “turn back the boats” policy named Operation Sovereign Borders. Both the Liberals and Labor are culpable of getting political mileage out of people who place themselves at Australia’s mercy. Both parties boasted of their toughness in July’s federal elections, and both claim that the offshore detention policy has been effective (although the Labor Party’s left-of-center members are split on the issue). Both genuinely fear a surge in sea arrivals if the policy is relaxed, just as they fear a resurgence of demagogues like Ms. Hanson who could play on the public’s fears of being “swamped” by foreigners.

It is true that the refugee boats — pushed back into Indonesian waters by the Australian Navy — no longer sink in our waters or land here. Yet the revelations about the abuses of Nauru, and a sense of shame about Manus, have begun to shift public opinion. Australians certainly support an unyielding border policy, but not unmitigated cruelty. While still anxious not to cause any more drownings at sea or fuel the shameful people-smuggling trade, many are sickened by the obvious distress of those in offshore detention camps.

The country is torn. And so, on their little islands off our shores, refugees wait.

There have been calls for a new bipartisan consensus and fresh inquiries, but there is a dearth of real ideas. Many have argued that those languishing in offshore detention centers should be moved to the mainland and their claims reviewed there, but politicians from both parties refuse to entertain that approach.

As long as Australia refuses to accept asylum seekers who come into our waters by boat, its policy will rely on the country’s regional neighbors to house them and help assess their claims. But the government has consistently mishandled those relations, rejecting offers of assistance from Malaysia and New Zealand, while its attempts to resettle refugees in Cambodia have failed.

The political leadership it would take to overhaul Australia’s grim offshore detention system is woefully absent, and there is growing pressure on Prime Minister Malcolm Turnbull. But for now, for the inmates of Australia’s asylum gulag, there is no end in sight to their hopeless limbo.

Correction: August 30, 2016
An earlier version of this article misstated the results of an August election in Australia. The One Nation party won four Senate seats. It did not pick up legislative seats in Western Australia’s state elections.