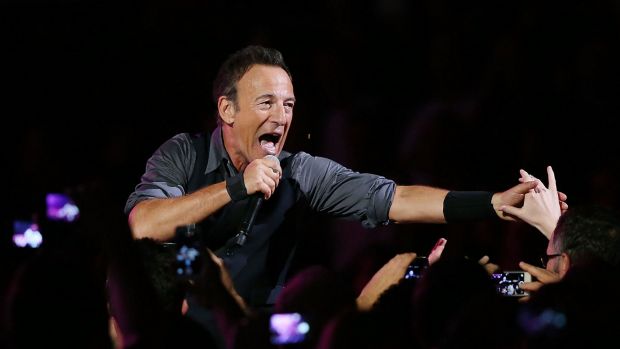 Bruce Springsteen is helping redefine what it is to be male after writing about his battles with depression. Photo: Getty Images/ Mark Metcalfe

When Bruce Springsteen became the pin-up of American teenagers and patriots in the 1980s, punk musician Henry Rollins was unimpressed. He told an interviewer: “I really dislike that guy. I think he is a very good businessman, a good scammer, he is taking advantage of a country that is unsure of itself.” What was the difference, he said, between pumping your fist to Born in the USA and Deutschland Uber Alles? “It’s bogus nationalism with a good rock beat.”

While constitutionally incapable of mellowing, these days Rollins, 55, has great respect for Springsteen, now 66.

And resent it as they might, the two men – the mainstream musical megastar, and the edgy, raging punk performer – are becoming more alike as they age. Both had difficult relationships with difficult, troubled fathers. Both have shaken their fists (with varying degrees of intensity) at the conservative establishment. Both have fought for the rights of minorities, for the unheard and unseen, women, veterans and the LGBTI community.

And both have struggled with depression throughout their lives.

And in talking about it so publicly – as Springsteen has just done in his freshly published autobiography, Born to Run – both are redefining, and enlarging what it is to be male. Both crush the idea of hard men as silent sufferers.

“I was crushed between 60 and 62, good for a year, and out again from 63 to 64,” Springsteen writes. “Not a good record. [My wife] Patti will observe a freight train bearing down, loaded with nitroglycerin and running quickly out of track … she gets me to the doctors and says: ‘This man needs a pill’.”

He also medicates with music – as does Rollins, former front man of Black Flag.

Rollins says he too has “battled depression all my life”. He wrote in LA Weekly: “There have been some truly awful stretches, as I am sure there have been for anyone who deals with depression, that have at times rendered me almost paralytic. Hours pass and I slow-cook on a cold spit.

“I have likened it to being a peach in a can of syrup yet fully conscious. In an attempt to keep moving along, I must stay in the immediate present tense, acutely aware of everything happening, like driving a car on a highway… When I have a show that night, it’s minute-to-minute. One of the only things that gives me a breather is music. I medicate with it.”

And yet both men have the most extraordinary, inspiring energy.

When Rollins, a man who appears to be made entirely out of electrical wires cased in inked skin walked onto the set of The Drum in the ABC studios in Ultimo, he did not sit in the chair most waiting guests lounge in, checking their phones idly. He stood. And he stood in a way a soldier might when about to salute: alert, upright, intensely focused, and watching the TV monitors, absorbing every word other guests spoke before he came onto the panel.

Before we went to air I asked him, if he was interviewing himself, what would be the one question he would ask. He answered: “Now that you have more years behind you than ahead of you, is that depressing or inspiring?”

His answer was, of course, inspiring, because he believes there is so much more to do and be and grapple with. He gets tired, he said, but not jaded.

And how glorious is that? His energy is rare and infectious.

Talking to Rollins is like sticking your finger in a socket – you walk away suddenly charged with his intensity, hunger for everything new and fresh and interesting and important. As The Project’s Tom Whitty said after meeting him, “the man is an absolute force”.

These are not men who waddle through middle age, or sit on old ideas, incubating identical spawn. They wrestle and grapple and think anew, and in doing so provide a kind of tonic to the apathy, nonsense, dissembling and politicking of so many public figures.

Rollins and Springsteen: full of ego and a thousand foibles, different in so many ways, but still touring, still raging, still engaging, still gripping. There are two keys to their enduring vim: The first is a capacity to constantly think afresh, to return to old thoughts with a magnifying glass and to shed prejudices you did not know you have, to grapple honestly with other people’s stories and truths, to soak up all the wild variability and madness on this planet and remain frank about your own.

And the second is to invent yourself – as Rollins says, “cut yourself out of stone”, then reinvent – and to be smart about rebellion: “If you hate your parents, the man or the establishment don’t show them up by getting wasted and wrapping your car around a tree. If you really want to rebel against your parents, out-learn them, outlive them and know more than they do.”

Tired, not jaded. The frontmen of our age.