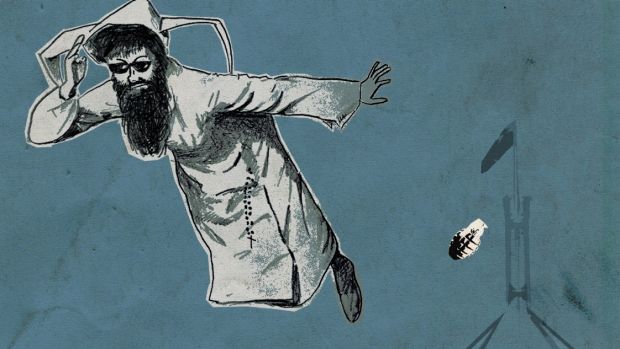 There must be a whole lot of nervous nuns in Australia right now. Because if we’re going to talk about divinely inspired long garments and security, as we have done with burqas this week, surely habits will be next on the hit-list.

Don’t scoff. You might be able to see their faces, but there is a long history of nuns smuggling contra under their habits, attacking government facilities and using the garments of their orders to conceal their identities.

Thieves dressed like nuns have robbed banks in Chicago, shoplifted beer in Britain, strapped large wads of cocaine to their legs in the Caribbean, and featured in Martin Scorsese films wielding machineguns.

But it’s not just pretenders. Real nuns have a global record of radical activism. Many have been labelled revolutionaries, and even terrorists.

In the 1940s, German Dominican nuns smuggled arms and ammunition to the Jewish resistance. In the 1980s, militant Filipino nuns stuffed prison documentation under their tunics and sneaked them out of jails. In Queensland, nuns smuggled money in brown paper bags under their habits and passed them to the local AIDS committees that premier Joh Bjelke-Petersen refused to fund. In 1985, an enterprising Greek orthodox nun even tried to smuggle 6000 bees into Kenya under her tunic. It is not entirely clear from reports how she managed this, but her defence was that she wanted to make candles for her church from beeswax.

The New York Times called it “the biggest security breach in the history of the nation’s atomic complex”.

Nuns. I’m telling you. I haven’t even mentioned the nuns in The Sound of Music who sabotaged the cars of the Nazis and hid motor parts under their tunics. And of course, recently in Australia, several nuns have been arrested for non-violent protests in politicians’ offices about children in detention.

Do we need any more evidence of lawlessness? Then why are we only worried about the burqa and hijab? And really, why again do we so relentlessly project cultural anxieties onto women’s bodies and clothes?

I’m only joking about the nuns, of course. I’d like the sky to rain nuns, weekly. They are peaceful creatures (usually).

But they came to mind in a week when bills making crucial, deep welfare cuts and sabotaging press freedom were passed by the Parliament, distracted by an alarmist spectre of something that just doesn’t exist: a horde of dangerous burqa-clad women, marauding Capital Hill.

The reasons are nonsensical. PUP’s Jacqui Lambie said the burqa comes from a religion that is “like terrorism” and obscures pretty faces that, presumably, might be up to something terrorist-related. We need, she said, to see their body language, which would surely involve not just burqas but anyone in a kaftan, muumuu, habit or even maternity gear.

This is a dangerous and divisive conversation to have. Of course we are confronted by the unfamiliar. That’s part of the point: few women in Australia do wear the burqa. Even Muslim women like Professor Sahar Amer, chairwoman of the Department of Arabic and Islamic Studies at Sydney University, who used to wear the veil herself, admits to “mixed feelings” about both the niqab and burqa. She used to feel “some anxiety” when she saw women wearing ultra-conservative veiling, she says in her new book What is Veiling? But the articulate women who spoke during the Arab Spring reminded her they are not ultra-conservative or brainwashed: “The niqab, like the burqa, may cover her face and head, but it does not cover her mind.”

So what of security concerns? Muslim women will show their faces if asked in security-related circumstances: female security guards should be available for this. Surely sophisticated screening processes do not involve the need for a public ban on a culturally important garment.

Abbott said he was not aware of a single woman who had sought entry to Parliament House wearing a burqa, a curious fact in itself. “And making a big song and dance about a hypothetical I am not sure is particularly helpful.” Quite right. So why did he? By likening apparel to suspicious, terror-related thinking, you will only divide the community, antagonise Muslims, create  anxiety, promote misunderstanding of the veil – the burqa, niqab and hijab – and prompt more women to adopt it. History shows when you ban something people wear as an expression of pride, identity or religion, more will wear it as its potency increases as a symbol of protest.

Importantly, what kind of advertisement for freedom are we when, in one week, we are threatening imprisonment for journalists who report on state secrets, and telling women that while they are free to, you know, offend everyone by wearing burqas, that we would rather they didn’t?

As Julie Bishop wisely said: “In Australia we have a choice, and that’s the kind of choice and society we fight to defend.” This is why Mr Abbott was forced to intervene to kill a move to require women in face coverings to sit behind glass in the parliament’s public galleries.

The rest of us wonder why we are talking about this at all.