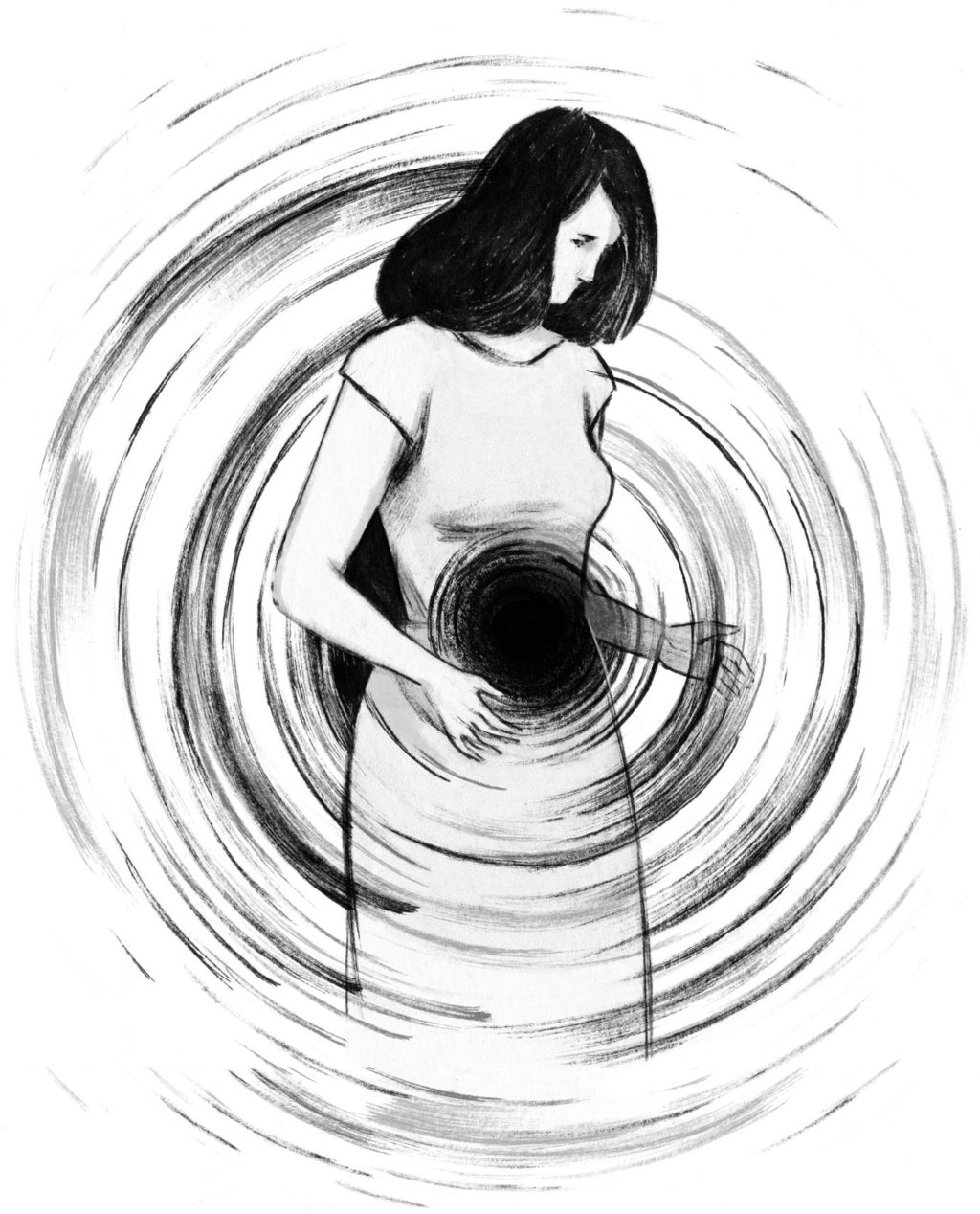 Sydney, Australia — I OFTEN wondered what it would be like to have a cancer growing inside your body. To suddenly discover you are carrying something that is eating you away, growing in an ugly, consuming mass in or around your bones or organs. To be blithely stepping through life, unaware that your insides are betraying you.

I didn’t expect to find out, though, at least not for decades. I have always been healthy and strong; I regularly do hot yoga and swim a two-kilometer stretch in a bay teeming with fish near my home in Sydney, all while caring for my two little kids, hosting a TV show, writing columns and making the final edits on the book I am writing.

But now I know: It felt as if I was carrying a baby. The enormous tumors that silently grew inside me suddenly ballooned without warning one weekend, pushing my belly out into an arc.

It was so odd; in the months beforehand I had felt bloated, and my clothes had grown snug, but my friends laughed and gently pointed to the vats of chocolate I consume when facing deadlines. I was exhausted but my doctor put it down to my workload.

Then, one Saturday in June, I was struck with agonizing pain and ended up in the hospital.

When I walked it felt eerily similar to being pregnant — organs cramped, squashed up against one another. When I wasn’t concentrating, I was sure I’d feel a kick and my hands would creep to my belly, as though protecting an infant. Then I would remember.

It was not a baby. It was a mass the size of a basketball, living in between my belly button and my spine. Soon I was almost waddling with it. A dark, murderous infant.

I wasn’t sure if I wanted to be operated on or exorcised.

The suspected diagnosis was bad; advanced ovarian cancer. “I have to be frank with you, Julia,” my surgeon said when I asked if there was a chance it was benign. “All the signs are that this is very serious.” I spent two weeks waiting for surgery, not knowing if I would live to the end of the year.

Your world narrows to a slit when facing a diagnosis like that; suddenly very little matters. I told my family and some close friends, then went into lockdown.

In the early hours of the morning I woke gripped with terror and quietly contemplated the prospect of death before I rose to get my son and daughter ready for school. I was buttering sandwiches for their lunches when my surgeon called to tell me it looked as though it had spread to my liver. I bit my lip, sliced the sandwiches in half, and held my children’s little hands tightly as we walked down the hill to the local red brick primary school.

In the days before the operation, I turned off my phone and shut my computer. I prayed so hard I grew unnaturally calm. I felt like a flower shutting in on itself, bracing, preparing for the night, closing to a quiet stillness.

It’s a peculiar, lonely kind of impotence, a cancer diagnosis. If you ran a thousand miles, aced a billion exams, hit a dozen home runs, nothing could reverse or erase the fact of cancer.

“It was a mass the size of a basketball, living in between my belly button and my spine. Soon I was almost waddling with it. A dark, murderous infant.”

There was only, of course, surgery.

The operation lasted five hours. The mass was fully removed, but it was far more complicated than anyone expected. I was in intensive care for eight days, in a tangle of wires, beeping machines, with drains in my lungs and my liver. I was so drugged I was hallucinating — Donna Summer was doing water aerobics in the hall outside, Angelina Jolie kept trying to call me (I screened her), a reggae musician sat mute on the end of my bed, my older brother had three heads, one of my feet kept catching fire, and it rained periodically around my bed.

When I closed my eyes, the room was still vivid to me, but the nurses were all clad in “Downton Abbey” garb, and the walls draped with velvet. I grew intensely attached to the nurses, grateful for their kindness, and lay wondering if there was a more important job.

I also grew attached to my surgeons, who were pleased to discover that the ovarian tumors — one on each ovary — were not malignant; I didn’t have ovarian cancer, but I did have another, rare form of cancer, which can recur but is nonaggressive and has a much higher survival rate.

For me, one of the most excruciating parts of going through something like cancer is the need to talk to strangers about your internal organs. It’s not just the abandonment of dignity in intensive care, where gowns flap open, strangers shower you and interns ask hourly about bowel movements, but that even outside the hospital, the prospect of fielding constant questions from acquaintances about innards, and mortality, can be agonizing.

I have never felt so shy in my life. But many others have walked this path.

And I am emboldened by the fact that I am slowly growing stronger. I am walking upright again and waking without scalding pain. I am now allowed to drive, and am preparing to return to work.

My prognosis is good, but like others, I will need to live with the fear of return. This week, my blood tests came back clear of cancer. But my scar runs the length of my torso; I feel permanently altered. It will feel strange returning to normal life.

When I came out of the hospital, everyone suddenly seemed consumed with irrelevant, foolish, temporal worries. Reading the fine print of your mortality is a great sifter of rubbish. I frowned at the complaints posted on social media when I was recovering — people who had the flu, were annoyed by politicians, burdened by work, or who were juggling jobs and children — and wanted to scream: BUT YOU ARE ALIVE!!!! Alive! Each day is a glory, especially if upright and able to move with ease, without pain.

I am still grappling with what all of this means. But in this short time, three age-old truths became even more apparent to me.

First, stillness and faith can give you extraordinary strength. Commotion drains.

The “brave” warrior talk that so often surrounds cancer rang false to me. I didn’t want war, tumult or battle. Instead, I just prayed to God. And I think what I found is much like what Greek philosophers called ataraxia, a suspended kind of calm in which you can find a surprising strength.

Second, you may find yourself trying to comfort panicked people around you. But those who rally and come to mop your brow when you look like a ghost, try to make you laugh, distract you with silly stories, cook for you — or even fly for 20 hours just to hug you — are companions of the highest order. Your family is everything.

Third, we should not have to retreat to the woods like Henry David Thoreau to “live deliberately.” It would be impossible and frankly exhausting to live each day as if it were your last. But there’s something about writing a will that has small children as beneficiaries that makes the world stop.

My doctor asked me a few days ago how I became so calm before the surgery. I told her: I prayed, I locked out negativity and drama and drew my family and tribe — all big-hearted, pragmatic people — near. I tried to live deliberately.

“Can I just say,” she said, “you should do that for the rest of your life.”