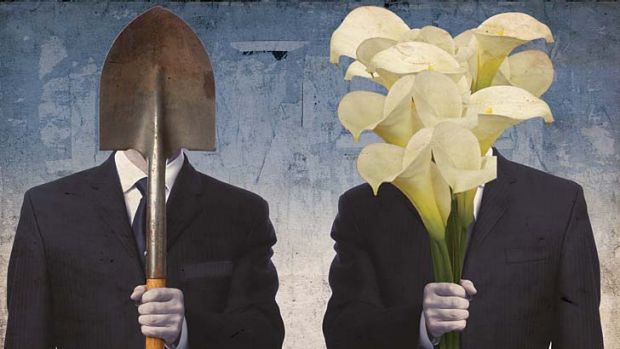 De mortuis nil nisi bene dicendum. The idea that it is rude, or a breach of etiquette, to speak ill of the dead was forgotten long ago. As the death of Margaret Thatcher showed this week, even in the first hours after death, insults can erupt like a burst water main.

Champagne corks soared minutes after it was announced that the 87-year-old woman who was prime minister of Britain from 1979 to 1990, had had a fatal stroke. While news bulletins flashed images of tanks, pearls, navy suits, riots, miners and triumphant waves, street-fires were lit, pieces of “Thatcher dead cake” handed out, and shop windows were smashed. Ding dong the witch is dead rocketed to near the top of iTunes.

Hordes swarmed social media to crow, blow raspberries and dance on the grave of Britain’s only female prime minister. People in Belfast, Glasgow, Newcastle, Liverpool and Manchester shared news from “hate parties” on Facebook. Recipes for “Brighton Bomb” cocktails were concocted. Activist Ian Bone called for Thatcher to be hung in effigy from the fourth plinth in Trafalgar Square.

The hate did not just come from a rabid fringe. British MP George Galloway – former Labor, now independent – tweeted “may she burn in hell fires”. Others were less blunt, but just as critical, and angry. In Parliament, Labour MPs such as Glenda Jackson, irritated by the cacophonies of praise spouting from Tories about their great and glorious leader stood to remind people Thatcher had represented “greed, selfishness, sharp elbows, sharp knees”. In Australia, Foreign Minister Bob Carr alleged Thatcher had made “unabashedly racist” comments about Asian immigration in Australia and Tasmanian MP David O’Byrne called her a war criminal.

On the streets, the chants were simple: “Maggie, Maggie, Maggie, dead dead dead.” “If you all hate Thatcher clap your hands.” The placards were foul: “Rejoice Thatcher is dead.” “The bitch is dead.” “One hellbound bitch.” “This way to the gallows you old c–t.” And the posts were obscene: “Who wants to p— on her grave?’ Photos posted on social media showed Thatcher with faeces laid across her face. Others started a campaign to start calling the woman who led Britain for 11 years, “Maggot Thatcher”.

Bitch – witch – c–t. And we are supposed to think this has nothing to do with her being a woman? Just as Sarah Palin demonstrated in the US, some of the vicious hatred for Thatcher illustrates sexism is not confined to either side of politics. (Nor will you see headlines about men like the one in The Times: “Margaret Thatcher: better politician than wife and mother.”) Meryl Streep, who played Thatcher in The Iron Lady praised her this week for having kept her convictions, shown girls they could be more than princesses and “withstood the special hatred and ridicule, unprecedented in my opinion, levelled in our time at a public figure who was not a mass murderer”.

I cannot remember the death of a popularly elected head of state ever being so quickly, viscerally celebrated by people daring each other to urinate on a grave that had not yet been dug. One Facebook page offered to take people on tours so they could relieve themselves in groups (“Margaret Thatcher Dies Piss On Her Grave Tours”). Charming.

Thatcher is not the only leader to take a country to war, crush unions, hammer a widening wedge between rich and poor and cause intense division. At least three other male leaders who will be at her funeral – John Howard, Tony Blair and George Bush – sent troops to war on the grounds of flawed intelligence and premises now revealed to be false. Would any of their deaths prompt graveyard urinals?

Thatcher was popularly elected, was not a dictator, was not responsible for genocide and did not stage a coup. She won – three times. She is one of the most influential figures of the 20th century. If we lost – or rather, Britain lost – because she won, then surely the analysis must go deeper than calling her a mean cow.

We do need to be frank when public figures die, and refrain from self-serving or false sugar-coating. Many have argued well about the need to voice the continuing dissent about Thatcher’s legacy, for fear that it will be shovelled under gilded eulogies and funereal carpets never to reappear: it is crucial to be vigilant about history in the present.

But don’t most of us still agree the time of someone’s death should provide an occasion to allow a family to pay respect, and for the rest of us to stop to reflect? This does not mean censorship, or sycophancy, just a brief pause. The question is when, and how long.

Surely this time is the funeral, and burial.

There have been persistent threats of protests at Thatcher’s funeral, especially as it is, controversially, being partly funded by the state. A ceremonial funeral is more exposed, and public: there will be vats of pomp, 2000 guests and a military escort. The triumphalism and salutes will no doubt irritate and offend those who believe she tore the country apart.

But celebrating death by protesting outside funerals sets a bad precedent. Think of the widely loathed Westboro Baptist Church members who regularly appear at funerals of soldiers who died in Iraq, or gays and lesbians, bearing placards proclaiming that the death was the will of God. The sight of people inciting hatred while others mourn is sickening.

Thatcher wouldn’t care: she always shrugged off protests when prime minister. But the moment a family takes a person’s body, says words over it, and lays it into the ground is one in which we should pause and allow those who wish to pay respects to do so.

In any healthy democracy, dissent should be vocal and continual. But as Billy Bragg tweeted: “This is not a time for celebration. The death of Margaret Thatcher is nothing more than a salient reminder of how Britain got into the mess that we are in today … Raising a glass to the death of an infirm old lady changes none of this. The only real antidote to cynicism is activism. Don’t celebrate – organise!” He supports wearing red on the funeral day.

As the slogan goes: Don’t get mad, get elected. Or, in this case: don’t deface the graves of deceased world leaders, get elected. She’s gone. Show us another way forward.