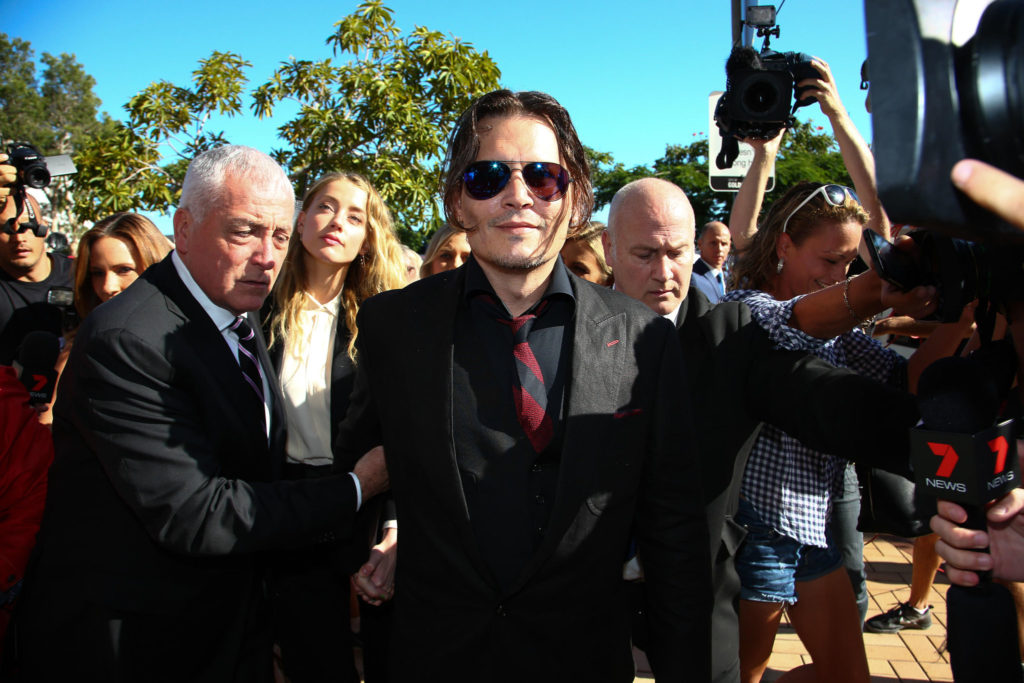 The fate of the dogs that the actor Johnny Depp and his wife, the actress Amber Heard, flew undeclared into Australia last year, thereby inciting a diplomatic incident, seems uncertain now that their owners have separated. Back in Los Angeles, Ms. Heard, who has also accused Mr. Depp of assaulting her, applied for custody of Pistol; it is unclear what will happen to Boo.

A further, unforeseen consequence of the smuggling of these teacup Yorkshire terriers via private jet is its possible impact on our approaching national election. Mr. Depp’s public row with the deputy prime minister, Barnaby Joyce, over the country’s biosecurity laws could even end up oiling the path for the conservative government to retain power. In the verbal jousting between the politician and the actor, it is the politician who has been winning, ridiculing Mr. Depp’s air of entitlement.

At first, it was all just funny. The dogs were so small, their names so improbable, the likelihood of their posing a threat to our wildlife so implausible that we laughed, hard. But we stopped when it became clear that Mr. Depp’s behavior stemmed from two obnoxious attitudes: First, that our far-off country’s rules about importing animals were ridiculous; and second, that he should be exempted from the scrutiny mere mortals faced.

Mr. Depp is hardly alone in wanting to travel with animals, and flying a pet across borders is often fraught. Happily for those flying from Australia to the United States, no quarantine is required. When my family brought our chocolate Labrador, Hugo, to New York, the worst of it was that he arrived in a deep fog of jet lag.

Returning to Australia, though, is another matter. Animals must go through an elaborate process, involving an extended quarantine during which visits from owners are not permitted, before the pets are allowed home. To enterthe country, they need to be microchipped, vaccinated against rabies and several other diseases, treated for parasites and examined by a veterinarian; their owners must also pay for an import license and book quarantine accommodation.

It’s a pain, but we all have to do it. And it has ensured that Australian animals are free of rabies, whereas in America the disease is endemic; even raccoons in New York’s Central Park have carried it.

So when Ms. Heard smuggled two dogs onto a private plane and sneaked them into the country, without alerting authorities, while Mr. Depp was filming here in April 2015, the couple wasn’t just annoying pedantic bureaucrats; they were violating laws.

Enter Mr. Joyce, then Australia’s agriculture minister. The maverick politician played to the camera with relish, announcing that he had a message for “a gentleman by the name of John Christopher Depp, 51 years old, a.k.a. Jack Sparrow.” Warning that the dogs could be euthanized if they stayed here, he declared: “It’s time that Pistol and Boo buggered off back to the United States.”

“If we start letting movie stars,” Mr. Joyce told ABC radio, “even though they’ve been the Sexiest Man Alive twice,” violate the rules on bringing animals in, “then why don’t we just break the laws for everybody?”

Shortly afterward, Pistol and Boo did jet out of the country, leaving their owners to face a fine of more than $15,000 or a possible two-year prison term. Ms. Heard had to appear in court charged on two counts of illegally importing the dogs and one count of producing a false document (her lawyer said this was an error).

Mr. Depp was affronted. In September, at the Venice Film Festival, he joked: “I killed my dogs and ate them under direct orders from some kind of, I don’t know, sweaty, big-gutted man from Australia.” Nice.

Meanwhile, Ms. Heard pleaded guilty to falsifying her documents, and the other charges were dropped. She received a good behavior bond.

As part of the deal, the pair then released a video apology, ostensibly to pay tribute to Australia’s biosecurity laws. “Australians are unique,” said Mr. Depp, “both warm and direct.” The couple’s sardonic, deadpan expressions and loaded, sarcastic lines made us roar with laughter again.

Mr. Joyce scoffed, “I don’t think he’ll get an Academy Award.” But he expressed himself satisfied that the message about our strict laws was “going off like a frog in a sock” around the world.

Australians have dozens of words for people who consider themselves better than others — poseurs, tossers, people who “have tickets on themselves” — so strongly rooted is egalitarianism in our culture. We understand the challenge to authority, but not if someone considers himself superior to the rest of us.

Asked to respond once more, Mr. Joyce advised the movie star to move on. “Long after I’ve forgotten about Mr. Depp,” he said, “he’s remembering me.” The once sexiest man alive has been felled by the most mortal of pains: shame and heartbreak. Worse, he now faces a damaging allegation of domestic violence.

Finally, when he learned of Ms. Heard’s filing for divorce, our deputy prime minister turned serious. “The one thing I will never revel in is any relationship breakdown, no matter what animosity that might be seen on the airwaves between Mr. Depp and myself,” he said. “No, I would never, ever revel in something like that.”

Even red-faced, big-gutted politicians can have flashes of grace.