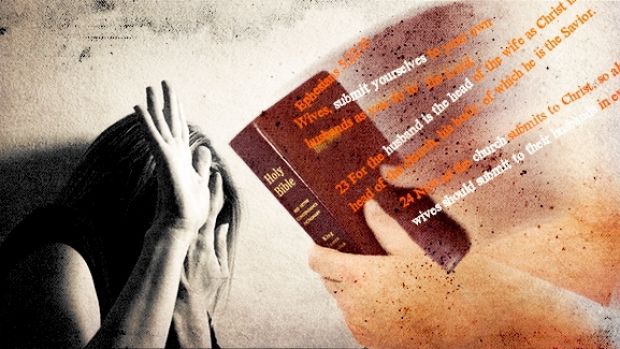 “What should a wife’s submission to her husband look like if he is an abuser?” asks American evangelical pastor Reverend John Piper in a Youtube video.

Well, he says, that depends on the kind of abuse.

If a man is asking his wife to engage in something “bizarre” like group sex, Dr. Piper says she should say: “Honey I want so much to follow you as my leader. God calls me to do that and I would love to do that. But if you ask me to do this then I can’t go there.” What about other situations? If it is “simply hurting her”, then she should “endure verbal abuse for a season”, and “endure perhaps being smacked one night”, before seeking “help from the church.” Not the police, who might be able to point out assault is illegal, or ensure the woman is safe.

It is an astonishing response from an influential man who is a reformed theologian and pastor, often cited in local Anglican media. He was also a guest at the annual Katoomba Christian Convention in 2011 – two years after he made those remarks.

In my last column I wrote about domestic violence in the church, posing the question: can emphasis in some churches on the doctrine of headship – that man is the head of woman, and women are to voluntarily submit – create a climate where men who seek to abuse their wives are enabled? I have been staggered by the response. It is much worse than I realised.

One woman wrote to tell me she stayed with a violent man for 15 years because her pastor told her that as her husband, he was her leader. Another was punched and dragged about by her hair by a husband who gave her a Bible with verses on submission highlighted in it. She told me of others she knew with similar experiences who became depressed and suicidal.

Another woman told me her minister advised her that her husband might stop hitting her if she had more sex with him. There were more. I will not reveal their names – their stories are theirs to tell, the trauma for many too recent.

I also heard from psychologists who decried the abuse of the headship doctrine. A Christian counsellor in private practice in Sydney — whose employer asked her not to supply her name — told me this was a “very significant problem” in church agencies: “I have worked with numbers of women and children who have been the victims of a twisted view of male headship which gives men permission to do whatever they want in the family. To exert control and power in a way that God never meant it to be.”

And as my inbox filled with stories of assault, and ministers told me privately of colleagues who’d preached that women should stay with abusive men, I watched the denials emerge from others in the church, who cried ‘Where is the data?”

A 2006 Church of England survey found the incidence of domestic violence in the church is the same as the broader community; too much. The report also found a denial of the severity or prevalence of domestic abuse within the church. What I did not know was that there has been a push to educate clergy about how to deal with domestic violence in Sydney, led by conservatives. There are good men leading this, trying to persuade their fellow clergy to take it seriously.

In the synod in 2013, Sandy Grant, Senior Minister at St Michael’s Wollongong, successfully argued for a review of clergy education on domestic violence. While headship is a good doctrine, he argued, it can be “misunderstood and abused.” He had heard of “many examples” from a counsellor of “the personal pain” of abused women who “stayed in unsafe situations longer than wise because they believed they just had to submit, full stop, end of story.”

“And,” he added, “apparently well-meaning Christians reinforced that.” Because a secular world did not understand biblical submission, he said, they had defended it: “Vigorously. At cost. But we’ve not defended as well against its abuse. There is no excuse for domestic violence, never ever.”

“No wife should feel spiritually obliged to accept such treatment.” – Archbishop Peter Jensen

Likewise, the then Archbishop Peter Jensen said in his presidential address that to use headship, “as some have, as an excuse to demand slave-like servility, or even to engage in physical and emotional bullying is to misuse it utterly and no wife should feel spiritually obliged to accept such treatment.” He is absolutely right. And more need to say it.

Those who advocate headship argue that it is about service, and selflessness, about loving as Christ loved the church – a cosmic mile from violence. The problem is that in Sydney, the same doctrine has been used for decades to exclude women from positions of authority. If headship is employed as the reason women should not be priests, it will remain a herculean task to convince people that it has nothing to do with power – and able to be twisted by those seeking an excuse to control women.

No decent Christian would support violence. It is the antithesis of the love that is the core of the gospel. But there is mounting evidence that it has been allowed in places it should be absent from.

And too many are more worried about protecting reputations than protecting the vulnerable. Denial is dangerous when twinned with ignorance; we cannot ignore these stories.