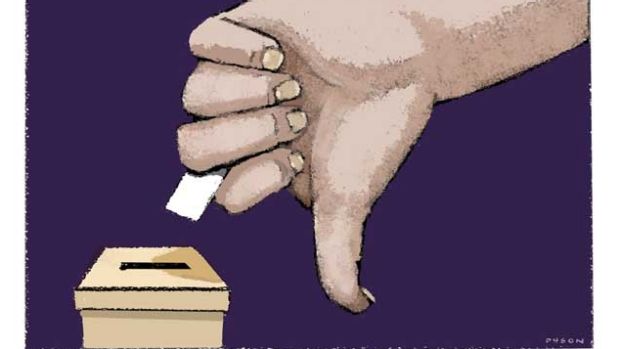 If you don't vote, you don't get to moan. Photo: Andrew Dyson

It has never been entirely clear why so many people like to draw penises on ballot papers. What is it, exactly, about being asked to turn a tiny wheel of our grand democracy that prompts this response?

The best description I have seen of the kinds of messages scrawled on voting forms came from the ABC’s Antony Green: “anatomically improbable suggestions”. Of course male genitals are very popular with ballot artists not just here but in other gloriously free western democracies; hence the prolonged chortling over the term “hanging chad” in the 2000 US election. In the UK, there was some confusion this week about whether a penis drawn in a box by a “cheeky voter” in West Dunbartonshire could count as a vote for the Remain campaign. After some dispute between rival campaigns, it was decided that as the member was erect, it could be properly counted as a “positive endorsement”.

But the Remainers stopped laughing when they realised if they had enticed more people to doodle inside the voting boxes – and more younger people to turn up at all – then they might have had entirely a different result.

All week, people have been shaking their heads at the fact that three quarters of young people wanted Britain to stay in the European Union, but only a third of them bothered to vote. Head-smack.

And here, it still amazes me that only two-thirds of people aged 18 to 25 have enrolled to vote in this election. Of course, I get it. We have all nodded off during the leaders’ debates, been bored rigid by campaign banalities and reductive slogans, had our trust decimated by smashed promises, and been frustrated by a lack of commitment to serious reform. But then what? Leave them to it?

Which is why I applauded when Peta Credlin said this at the University of Melbourne this week: “You’ve only got one woman, one vote. You’ve really got to make sure that you are informed. If you are not informed on a particular issue, whatever that issue might be, get yourself informed.

“Because in the end, you will inherit all the good things that government has done, and you’ll get the mess as well.”

The forceful former chief of staff to Tony Abbott said the onus was on young people to learn the “fundamental building blocks” of how democracy functions, especially given the ease of finding information online.

How is it that democracy, which by its nature is fractured, imperfect, mutable, is now so often portrayed as an unfashionable option? And why do people insist that lack of participation can be the best way to participate?

Remember when British comic Russell Brand said politics was so densely corrupt that young people should not vote? “I don’t vote,” he said, “as I believe democracy is a pointless spectacle where we choose between two indistinguishable political parties, neither of whom represent the people but the interest of powerful business elites that run the world.” YEAH!

As he further explained: “The total revolution of consciousness and our entire political and economic system is what interests me, but that’s not what’s on the ballot”. No, nor are enormous platters of cheese and quince paste.

Brand’s argument was so illogical and so daft that he soon changed his mind and pledged support for Labour. “Democracy,” wrote Brand hastily, “is for life, not elections.”

Right. But why has democracy lost its sheen? Or are young people just failing to inform themselves? According to a Lowy poll, in 2015, less than half of young Australians believe democracy is better than other political systems. A quarter thought: “In some circumstances, a non-democratic government can be preferable.” Another quarter agreed: “It doesn’t matter what kind of government we have.” Are you guys insane?

At the last election, 5.9 per cent of votes were informal – the highest in three decades. And almost half were intentionally so: a new study by University of Adelaide academics found the number of informal votes determined to be deliberate shot up between 2001 and 2010 from 34 per cent to 49 per cent. The author, Professor Lisa Hill, attributed the jump to “increasing disaffection and alienation among the young” – partly, she says because there is perceived to be so little to distinguish major parties.

Credlin would scoff at such an excuse. Voting informally, she said, is “an abrogation of your responsibility. If you want to moan, vote and own it. If you don’t turn up, like in Brexit, or you put in an informal vote, or you don’t go and ask the tough questions online or in forums, then I think you lose your right to moan.”

Come on, Australia. Get in there. Think. Question. Vote.

And if you can’t, at least write something interesting for the scrutineers.

“Blank votes seem like a sign of despair to me,” Professor Hill said. “There’s something quite sad about it.”