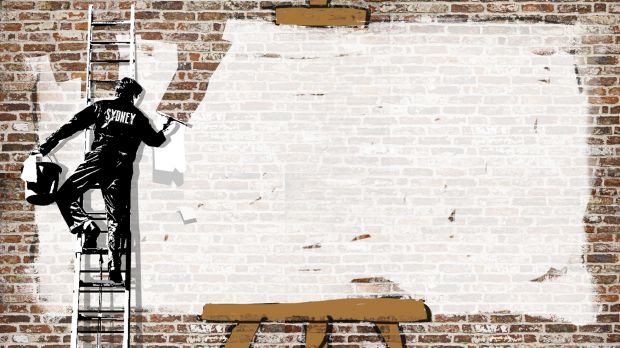 In the painting, a bearded man is screaming, as though yelling into a void, his face scrunched. His hand is raised and he is spraying blue paint into his mouth. He seems angry, defiant and sated all at once: much like a street artist, both devouring and creating art.

Mitchell, 29, works as a mover, next door to the Levee, which sits on the corner of Berry Street and North 3rd, and is renowned for its free cheese balls. His work has provided handy new canvases for his art: the sides of box trucks.

In 1980s New York, Mitchell says, trains were golden trophies for graffiti writers. Then, if you managed to paint a railway carriage on a weekend, by Monday, millions would have seen it. “Now they are all stainless steel, easily cleaned and don’t even leave the train yard if you paint them.” Partly because of this, box trucks are as hotly desired now as blank walls, and Mitchell proudly drove his works around, like a moving art gallery around the city. Every night, he returned to Williamsburg and drank at his local, the Levee, so he decided to paint that as well.

When you lift the lid on New York’s thriving street art scene, you will quickly notice Australians have been at the vanguard of one of the more remarkable cultural transformations in recent years – the creative global explosion of street art. And we have barely noticed it.

Mitchell says he has met more Australian street artists in New York than in Australia. He hesitates though, before saying why this is. It might be a craving for adventure – he cites one artist who painted one work while being dangled upside down off a building by his ankles by friends – or, he says, it might be Australians’ frequent preference for figurative art over abstract that has hurled them on to the global scene.