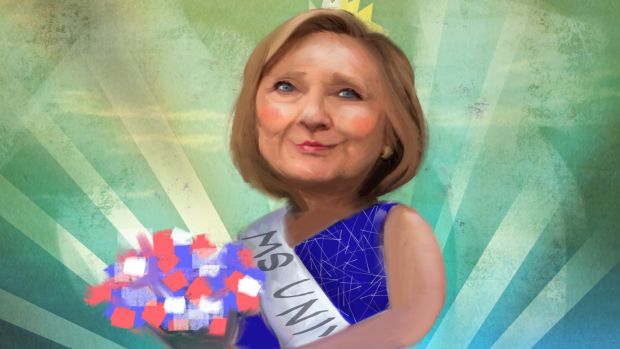 Here’s something spooky. If you read the philosophy of the Miss Universe pageant closely and repeatedly – and who hasn’t? – it starts to become clear that Hillary Clinton could in fact not just be Donald Trump’s greatest nightmare but also his creation: Ms Universe, all grown up.

The leading Democrat candidate is, quite clearly, not what we know the pageant to be – the vying of genetically favoured, surgically enhanced, starving women for the right to appear in public wearing a crown with a swimsuit – but what it aspires to be.

The Miss Universe Organisation – long championed by Trump – declares that: “A confident woman has the power to make real change, starting in her local community with the potential to reach a global audience. … Self-confidence is the key. Every woman should have the confidence to stand up in any situation and declare,’I am secure and that’s what makes me beautiful!'”

It continues: “The contestants and titleholders that have gone through the Miss Universe system are able to cultivate their personal career goals, advocate for humanitarian issues and be a voice to affect positive change in the world.”

Hillary took a somewhat different route, but the end result is in the same ballpark, right? Despite this, the high-polling Republican candidate and self described “cherisher” of women Trump has experimented with ways of undermining that confidence during the campaign. He called her trip to the bathroom “disgusting” and said Barack Obama had “schlonged” her in the 2008 primaries (beware any man who uses penis-references as verbs). He implies she is too old, lacking energy, flagging after making speeches. One of his team members retweeted this question posed by a Texan equestrian: “If Hillary Clinton can’t satisfy her husband, what makes her think she can satisfy America?”

And here we go again.

Look, we all know Trump has form with women; he said he would be dating his daughter Ivanka if they were not related, and he prides himself on being able to pick a high-calibre woman, much as a horse owner might be able to pick a fine filly – checking the teeth, curves and vitals. He implied fellow Republican Carly Fiorina was too ugly to be president, declared Heidi Klum is “no longer a ten”, that Angelina Jolie isn’t technically beautiful, and in 1991 he told Esquire it didn’t matter what the media wrote about him as long as he had a hot young “piece of ***” on his arm.

But blaming Hillary for her husband’s misconduct is retrograde. He cheated, he lied. Are we really still stuck in the 1950s – or earlier – mode of wife blaming?

Of course, it was only a question of when Bill Clinton’s past sexual misbehaviour would emerge during his wife’s presidential candidate campaign, but its predictability makes it no less banal.

It has prompted the most recent conundrum for American women; how to argue for the importance of digging up decades-old allegations against Bill Cosby while downplaying similarly aged charges against the husband of the woman likely to be America’s first female president. Here’s the difference: Bill’s have been thoroughly aired and raked over. But more importantly, they are not Hillary’s peccadilloes. (Carl Bernstein claims Bill was lying to Hillary about his infidelity; can she really be blamed for this deception?)

As a presidential candidate who has been making a strength of her gender, and her non-threatening grandmotherly status, Hillary should expect that her past treatment of all women, including those linked to her husband, will be scrutinised. It’s true that while today Clinton encourages women to speak up when abused, decades ago she sided with and publicly supported her husband against charges of abuse and harassment and helped cast doubt on – and worse, slur – his accusers. Monica Lewinsky was unfairly, callously, continuously slammed as crazy by the Clinton camp. Again, while this was ultimately Bill’s affair, Hillary too showed a political ruthlessness. The question is, how much weight will be given to what she has accomplished since – and what she promises to be to women if she wins.

At a recent New Hampshire rally, Hillary said: “If it’s all the same to you, Mr  Trump, I’d rather you stopped cherishing women and started respecting them.”  (A Fox news poll released last weekend found half of respondents found Bill Clinton more respectful of women than Trump.)

Hillary has a commanding gender- gap lead over Trump, even though much of this is due to the male-skew among Republicans. The women’s vote matters less to Trump now: he is currently relying on less educated, working class men for his currently polling high. Women will only begin to matter when the field thins; as reported by Politico, at the general election women are predicted to form about 52-54 per cent of the votes.  In 2008, Barack Obama got 55 per cent of the female vote, while Mitt Romney lost with 44 per cent.

So Trump slights women at his peril.

But the real twist is that Hillary wants him to win the Republican nomination, unlikely as it is. He’d be easier to beat, a fact that has not escaped right-wingers like conservative broadcaster Glenn Beck who have theorised that he is a “spoiler”, or a secret, sleeper agent for Hillary’s campaign.

What a brilliant twist it would be if the former owner of the Miss Universe pageant aided America’s first female president to power.