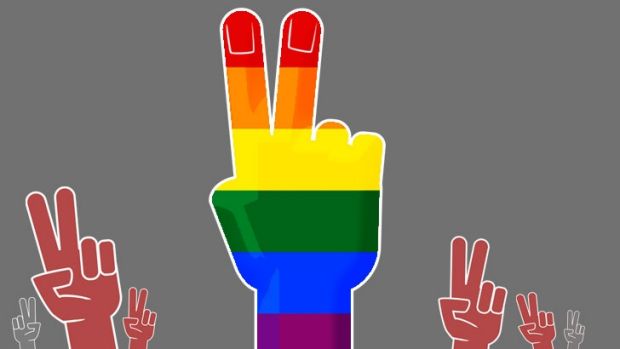 Prince was a brilliant, often sexually provocative musical luminary. He also was a deeply conservative Christian who opposed marriage equality. As a Jehovah’s Witness, he did not believe people should be able to “do what they want”.

He told the New Yorker: “God came to earth and saw people sticking it wherever and doing it with whatever, and he just cleared it all out. He was, like, ‘Enough’.”

So how can we reconcile this? Would it be fair to say because he had a traditional, orthodox view of marriage, that he hated gays, lesbians, transgender, bisexual or intersex people, millions of whom adored his music? It would be hard, almost unimaginable, to think so.

So when does opposition become hate? Where is the line?

This is something Reverend John Dickson, just back from a four-month stint studying and teaching at Oxford, has been wrestling with for the past week after one of his posts on Christianity and the LGBTIA+ debate was deleted by Facebook staff.

Last weekend, Dickson, the minister of St Andrew’s Roseville, posted a question: if you label all conservatives who express different views on marriage as haters, does this make members of the LGBTI+ community feel more hated?

He argued: “At the climax of many public debates, as advocates of gay marriage raise their voices and deliver their insults, they frequently declare with unnoticed irony something like, ‘And this is precisely why we shouldn’t have a national plebiscite on gay marriage: the discussion is so negative and hate-filled, and it can only reinforce feelings of rejection among LGBTI youth’.”

His fear was, he wrote, that “by heightening the tone of the debate and reiterating the hatred which classical marriage advocates allegedly have for the LGBTI community, it is advocates of gay marriage themselves who are unwittingly entrenching in young gay and lesbian men and women the sense that there is something wrong with them, that there is a whole segment of Australian society that despises them and sees them as second-class citizens”.

“In short,” he continued, “isn’t it possible that gay marriage advocates’ frequent claim that traditionalists hate gays is exacerbating the feeling among LGBTI youth that they are hated?”

This is a massive, inadvertently inflammatory call and one I do not agree with. Surely acceptance, tolerance and absence of judgment about difference would make LGBTI youth feel better. But, isn’t it up to them, to say what makes them feel better? It is also highly provocative to accuse those who either belong to, or are allies of the LGBTI+ community of augmenting the very hatred they have spent their lives trying to fight and diminish.

When you critique marriage equality, you have to be mightily careful that you do not then imply LGBTI relationships are different, less valid or legitimate, less worthy of recognition and sanction. Or that they are in any way a “choice” or – worse, a “lifestyle”.

But are we really at the point of censoring such a view? Dickson’s questioning should not be slammed but aired, and he is right to argue conservative viewpoints should not be so rapidly shut down or dismissed as hate. It was very odd of Facebook to delete this post.

By Sunday night, the piece was reinstated. Federal Liberal MP Andrew Hastie had alerted the former human rights commissioner – and now Liberal candidate – Tim Wilson, who had agitated Facebook for its reinstatement.

A Facebook spokesman said it was removed in error.

So back to Dickson’s point – is our definition of hate too broad, and offensive to those with diverging views? Or is it actually more discomfiting that Christians could even be open to accusations of hate?

Ponder this other post, also on Facebook this week by Garry Lee-Lindsay, a school chaplain in Sydney. He had been troubled, he said, by reading recent posts by Christians denouncing same-sex marriage, or transgender people. Lee-Lindsay wrote:

“I can’t see how this helps anything. Please don’t try to convince me that it is intellectual debate or you are approaching the subject with an open mind and a loving heart. You might be, but why do you have to say it? And why is it so important to make comment about other people’s lifestyle or culture on Facebook? Just go out and make friends with people because they are people, made in the image of the Creator, inseparable from God’s love.

“What about calling people to prayer for those poor people in Japan and Ecuador that lost their lives and family in the earthquakes? To start with!!! What about we stop writing posts like this one, make some soup and sandwiches, go and hand it out to the hundreds of rough sleepers on our streets every night and give them some company? Why don’t I? Because I’d rather whinge about the terrible people that aren’t like me, don’t think like me, don’t live like me. And do it from a distance, because then at least I know I’m OK. What a wretched man I am? Who will save me? Thanks be to God.”

Julia Baird is a host of The Drum on ABCTV. On Monday night she is hosting a special Q&A program on Christianity and the state.