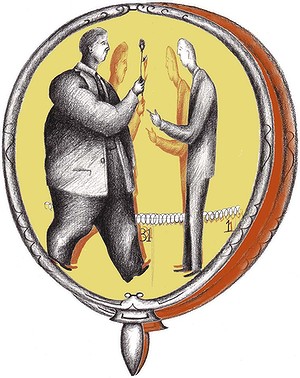 Her sister Kourtney declared she would “push the limits a little more when it comes to fashion”. Their 25-year-old brother Rob – reported to be “more confident than ever” after having Botox recently – resolved to launch a dress-sock line.

I know, it’s lazy sport to poke fun at the Kardashians; we’ve long rolled our eyes at those who successfully exploit our apparent interest in succulent bottoms and superficially sparkly, flash-lit lives. And New Year’s resolutions are also often lame, cliché´d and as enduring as a pre-election promise. Simplicity is a fine aim, after all.

But these resolutions can also be revealing, important markers of our cultural preoccupations. It is the one time of year that the majority of us, in some form, briefly pause, reflect, and vow to somehow be better. The historian Joan Jacobs Brumberg documented this in an excellent study of the diaries of American teenagers in the 19th and 20th centuries. She found that in the 1800s, girls earnestly promised in New Year’s resolutions to try to hone their characters, and become kinder, more disciplined and respectful.

One wrote in the 1890s: “Resolved to think before speaking. To work seriously. To be self-restrained in conversations and actions. Not to let my thoughts wander. To be dignified. Interest myself more in others.” Another, the daughter of a Pennsylvanian shopkeeper, asserted in 1892: “I am striving daily to build up a beautiful whole character. I fail often, but am determined to persevere.”

A hundred years later, it’s mostly about looking hot. Desire for self-improvement is couched in almost entirely physical terms: “I will try to make myself better in any way I possibly can … I will lose weight, get new lenses, already got new haircut, good make-up, new clothes and accessories.”

This is not limited to adolescent girls, of course. Weight loss is the No. 1 resolution of adults in Australia as well as America: sugar, carbs and ill-defined toxins are the demons we pray to conquer.

And yet it has not always been this way. You can’t help wondering whether, in a culture fixated with big personalities, showmen, shysters and celebrities, we have lost the ability to talk to each other about character. It often seems too earnest, we don’t have a common honour code or a kind of chivalry we agree upon, and the language of self-improvement has been almost entirely cannibalised, and appropriated by discussions about low body fat and high-reps. It’s good to be fit, crucial to eat well and obesity is a troubling epidemic, but six-packs hardly mean sainthood (and, conversely, often signal self-absorption.)
The New York Times columnist David Brooks, in an insightful talk at the Aspen Ideas Festival this year, lamented the disappearance of what he calls the character code, which has historically spanned the Greek ideals of courage, honour, prowess and assertiveness (along with lack of self-doubt), and the biblical ideals of humility, honour and service.

He argued that: “we’re in a world full of good people, but who don’t have a clear vocabulary for character. We don’t have a moral system.” We have lost these, Brooks suggests, partly because we see old Knights of the Round Table ideals as elitist fantasies of private-school boys, and because we have rejected the idea of sin as something we need to overcome.

Chivalry has also been misunderstood as a way men act towards women they want to seduce, not as the way all people should act to each other; with courtesy, especially our elders, the young, the vulnerable and the ill.

But surely it’s also because we too often neglect the art of telling the stories of the noble and self-effacing, the horse-hearted and the brave. Of making icons not just of the physically perfect, prominent or powerful; but people who change other’s lives.

In 2012, we have seen stellar examples of self-sacrificial love, and courage.

Corporal Daniel Keighran ran into enemy fire several times in Afghanistan to divert gunfire from a wounded fellow soldier who was being evacuated. He shrugged off the idea that he had been courageous when he was awarded the Victoria Cross this year – the third given since Vietnam – joking that he had merely been stupid. Yet the citation said he had broken fire “with complete disregard for his own safety”, and intense regard for the safety of his comrade.

In another war zone, with a lone madman in a suburban school in America, Victoria Soto, a teacher at Sandy Hook Elementary School in Connecticut, ushered her small students into a cupboard, placing her body between the killer and them, and dying as a consequence.

Then there is the kind of courage that whistle blowing requires. Detective Chief Inspector Peter Fox, a NSW police officer for 30 years, wrote to the Premier, Barry O’Farrell, alleging the Catholic Church had been concealing child abuse for decades. This act took enormous gumption. Miraculously, the Prime Minister, Julia Gillard, agreed to his request for a royal commission – for all institutions – within days.

These are all spectacular, newsworthy acts, but thousands spend their lives quietly caring for others, in prisons, shelters and hospitals. We should also remember the formidable, gentle Elisabeth Murdoch, who recently died at the age of 103. Long overshadowed by her titanic husband and son, she was an indefatigable philanthropist who worked with a hundred charities, and advised people in an interview four years ago: “Be optimistic and always think of other people before yourself.”

There are many more stories, mostly of people we have not heard of, decent sorts who are usually unsung, hidden and happy about it. But it is the stories we tell each other and our children about the qualities we admire; the great acts, the small gestures, the signs of respect for strangers, flashes of great humanity, and decades spent labouring for the disadvantaged that should shape our thinking about the people we want to be.
Character isn’t fluke, happenstance or luck. It’s hard work, habit and dedication.