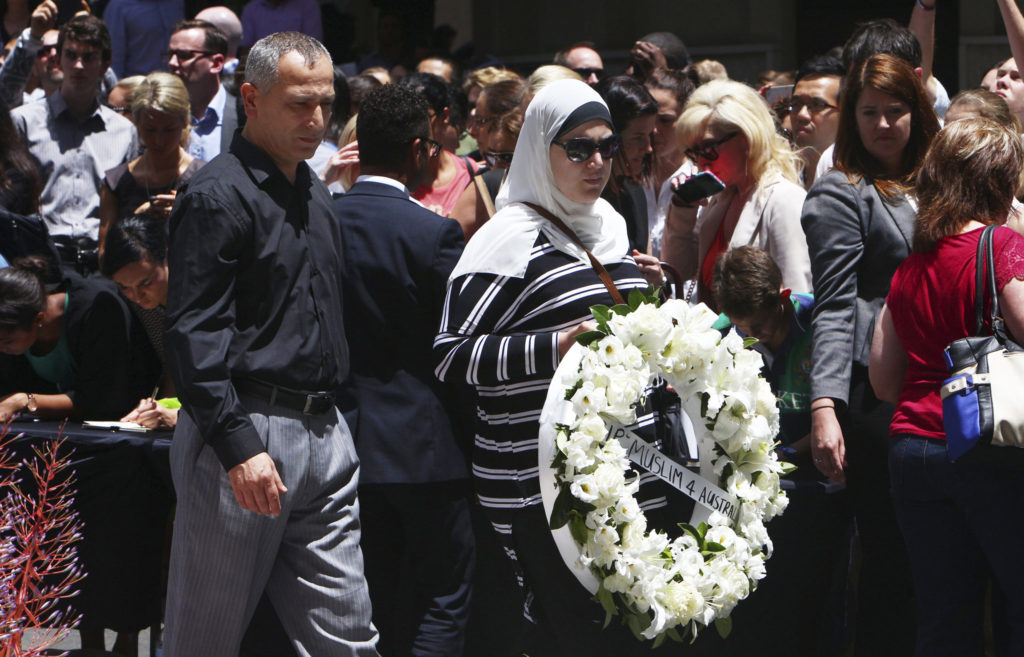 AUSTRALIA’S remoteness is, for those of us who live there, possibly the greatest thing about it.

We are, in the main, undisturbed. There have been some exceptions; in the Second World War, Japanese planes bombed us in the north, and their midget submarines slunk into Sydney Harbor in the south, sinking a ferry. But generally, we are safe.

This is the way we like it. (Even if we had a rather awkward debate about whether a former prime minister actually called us “the arse end of the world.”) The author Bill Bryson probably spoke for a lot of Americans when he wrote, “Australia is mostly empty and a long way away. Its population is small and its role in the world consequently peripheral.” It is “stable and peaceful and good. It doesn’t need watching, and so we don’t.”

Until now. For 16 excruciating hours this week, we all watched anxiously as a 50-year-old Iranian refugee, Man Haron Monis, held 17 people hostage in a Lindt cafe in Sydney’s central business district, just blocks from the State Parliament. The hostages held hands up against the window, pinning up a black flag with white Arabic writing on it. The city grew still as office buildings were evacuated and workers piled into ferries under an incongruously peaceful blue sky.

Three people died, including the hostage taker, after the police saw a flash of gunfire and stormed the cafe. The other two were a 38-year-old mother of three and the cafe’s 34-year-old manager.

There are many crucial questions as to how multiple warnings about Mr. Monis were ignored. How was someone charged with being an accessory to the murder of his 30-year-old ex-wife allowed out on bail — not once, but three times in the last year?

And why was he not on a terror watch list? Even the prime minister, Tony Abbott, was baffled by this. Mr. Monis had sent hateful “condolence” letters to the families of soldiers killed in Afghanistan between 2007 and 2009. After he was charged with sending these “grossly offensive” letters by mail, he declared that he would in the future deliver them by hand. He managed to escape a two-year jail sentence and was given 300 hours of community service instead, but he appealed. Just three days before he staged the siege, his appeal to have this conviction overturned was rejected. Earlier, he had told reporters, “This pen is my gun, and these words are my bullets. I’ll fight with these weapons against oppression to promote peace.” Until he got real bullets.

When will we take violence against women more seriously? This man had a long record of vicious harassment of his wife before being implicated in her brutal death. He had been charged with more than 40 allegations of indecent and sexual assault from seven women who had come to see him in Sydney when he had purported to be a “spiritual healer” with black magic powers. The most recent charges were made in October.

Finally, how did he manage to get a gun when we have such stringent gun laws?

While the alarm from this “lone wolf” attack will lead some to argue that we need more laws to expand surveillance and security, the laws already in place should have been sufficient to alert the police to the danger he posed.

The measures the government is introducing to counter the heightened terrorist threat posed by the Islamic State — surveillance and foreign-fighter laws, including a clause that could put journalists in jail for up to 10 years for disclosing information on special intelligence operations — would not have looped Mr. Monis further into any net. Authorities already could have legally monitored his phone and internet activity.

Possibly worst of all, the greatest message might be that there is none. A mentally ill, angry or paranoid man might simply have used the words Islamic State as a crude vessel for his morphing identity, and fundamentalist violence as a vehicle for his own multifaceted hatred. Australian Muslims, both Shiite and Sunni, had disowned him repeatedly. He did not have an Islamic State flag in his possession; he asked for the police to deliver one as part of his (unmet) conditions.

As the prime minister said, this was one disturbed man carrying out a “sick fantasy.”

Perhaps the most heartening part of the Australian response was the enormous wave of concern that arose expressing fear that the siege would result in aggressive behavior toward Muslims.

The hashtag #illridewithyou arose after the shootings when one woman told another who had taken off a head scarf to put it back on, and that she would walk with her to ensure she would not be harassed. As people raced to post their own offers of riding with anyone who traveled in fear, thousands placed bouquets of flowers in Sydney’s business district, a long, solemn carpet of respect and regret.

Australians can no longer rest on our remoteness, and our laid-back identity has been punctured. But if tolerance can seep through the holes, it will be a triumph for all who oppose the pall of terror, and the pull of the sick violence that can capture the imagination of a madman.

Correction: December 20, 2014
An Op-Ed article on Wednesday about the Sydney hostage siege misstated the timing of a statement by the gunman, Man Haron Monis: “This pen is my gun, and these words are my bullets. I’ll fight with these weapons against oppression to promote peace.” He said that in 2009, when he was convicted of sending offensive letters to the families of soldiers killed in Afghanistan — not three days before the siege, when his appeal to overturn the conviction was rejected.