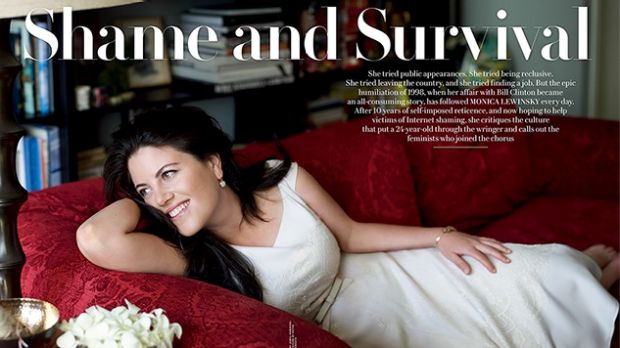 You’d have to admit it would be somewhat discomfiting, 16 years after stupidly fooling around with a married man, to have your full name made synonymous with ejaculation. Globally. That’s what Monica Lewinsky found when she first heard Beyonce’s new song, Partitition, about a man who:

“Popped all my buttons and he ripped my blouse,

He Monica Lewinsky’d all on my gown.”

Lewinsky is used to such things. But she tartly responded in her new essay in Vanity Fair to say “Thanks, Beyonce” but that, “if we’re verbing” the correct term would be “Bill Clinton’d all on my gown.”

She’s exactly right. Not only has she carried the bulk of the shame of their liaison – must she also be tagged with something she is physically incapable of doing?

Poor Monica. An unwise, indiscreet 20-something whose daft relationship with a charismatic boss led to the impeachment of a president.

Bill Clinton moved on, and is a lion of the Democratic Party, cheered wildly at conventions. Hillary may be the next president of America.

And Monica, a mere mortal, has floundered in the wake of what she now called international “online humiliation”. She has launched a line of mediocre handbags, worked for Jenny Craig and Fox TV and earned a masters degree but failed to win a secure or satisfying job as she struggled to move on beyond a brief but spectacular relationship that narrowed her life to the point of chokehold.

For a decade, she has been silent. My old magazine, Newsweek, spent years trying to cajole her into telling her story, along with a host of others, but we all failed.

“I’ve decided, finally,” she writes, “to stick my head above the parapet so that I can take back my narrative and give a purpose to my past. (What this will cost me, I will soon find out.)”

She was photographed prettily curled up on a couch, dressed in white.

The scorn and ridicule erupted instantly.

“Move on, Girl!” cried TV host Chelsea Handler as a snickering comedian on her panel said America was one of the “The Empires that Vagina has ruined.”

(Technically, it wasn’t vagina, but that’s another point.)

The New York Post cover was simple and puerile: MY LIFE SUCKS. (They called her a whiny, “shameful recluse”.)

Other headlines included: “Monica blows back!” Ha ha! Get it?

The most boring part of this debate is that almost nothing is new. Lewinsky is just older. At 40, she is still the butt of jokes, still relentlessly slut-shamed and still overwhelmed by the unassailable juggernaut that is the Clintons. Brilliant operatives renowned for a crushing, ruthless ambition.

There are four things to take from Lewinsky’s attempt to “bury the beret and bury the blue dress”.

First, she is at pains to point out her relationship was consensual, writing that “any ‘abuse’ came in the aftermath, when I was made a scapegoat in order to protect his powerful position … The Clinton administration, the special prosecutor’s minions, the political operatives on both sides of the aisle, and the media were able to brand me.” This is true.

Second, feminism is a curious beast with many heads, often all shouting at the same time, slowly loping along the road of progress. In short, women disagree.

Many tried to downplay Bill’s sins because they believed having the Clintons in power would improve women’s lives. This hurt Lewinksy – where was the sisterhood when she was being stoned? She writes: “Given my experience of being passed around like gender-politics cocktail food, I don’t identity myself as a Feminist, capital F. The movement’s leaders failed in articulating a position that was not essentially anti-woman during the witch hunt of 1998.”

But Hillary was castigated too – for standing by her man.

Third, it is an enduring and unfortunate truth that men involved in sexual scandals are allowed redemption, which often simply comes with time, and women are allowed silence. Lewinsky says: “The Anthony Weiners and Eliot Spitzers … bow out of public life for a while, but they inevitably return, having put it all behind them. The women in these imbroglios return to lives that are not so easily repaired.”

Fourth, this essay is really about Hillary. (Lewinsky writes she wants to stop tiptoeing around “other people’s futures”.) A Hillary who described Lewinsky as a “narcissistic loony-toon”. A Hillary who is a feminist icon even though she worked to destroy Lewinsky’s reputation. A Hillary who blamed herself and Lewinsky for her husband’s idiocy. At least in part.

Of all three players, Hillary Clinton has triumphed. Lewinsky and Bill are the clichés. It was previously inconceivable that a former president’s wife would run for president, and serve as Secretary of State.

The two highest peaks in her approval ratings have been after the Lewinksy scandal, and when she lost the nomination to Obama. Hillary is most loved when she is most vulnerable. And most admired when she endures.

But if we are to allow anyone the possibility of redemption, it should be Lewinksy, whose head was stuck on spikes for the world to laugh at. The least we can do now is let her stick it above the parapet again if she wants to.

But what she’ll see before her is the grinning spectre of an unquenchable woman who was once her rival, and who could even, perhaps, one day, be her president.