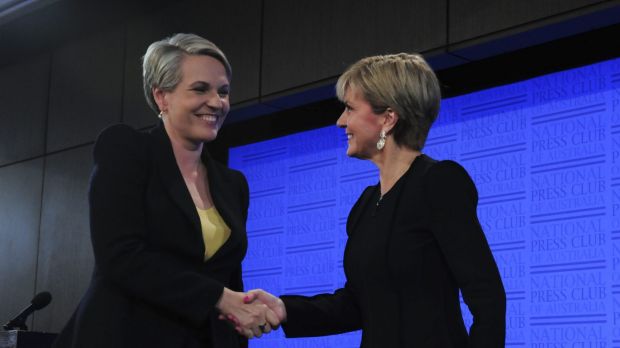 Well this is getting a bit embarrassing. While Hillary Clinton is making a serious and unprecedented bid for the White House, more and more Americans are asking questions about the experiences of Julia Gillard.

Just this week author Malcolm Gladwell has been cable-TV hopping to promote his new history podcast, while expounding on his theory that when we allow one woman through the ranks, we close them behind her to ensure another doesn’t follow. In this scenario, he argues, our consciences are safe because we can tell ourselves we have already had one.

It’s a phenomenon Gladwell calls “moral licensing”. He told CBS This Morning: “what happened to Gillard in Australia is very, very interesting. She gets elected, everyone says, ‘Wow, we finally elected a woman’. And there is this kind of backlash. It unleashes this kind of torrent of suppressed misogyny and abuse. You cannot imagine what she goes through.”

I don’t really buy his theory – I think Australians would happily elect Julie Bishop or Tanya Plibersek if given the chance. But when I watched him I could not help have the discomforting thought that as America is grappling with the prospect of a lady POTUS, we are sliding backwards.

But not only did Australia see its only female PM kicked to the curb three years ago with a boot steel-capped with contempt, we now have the lowest number of federal women MPs in a quarter of a century (since the election of Paul Keating in 1993). And the Coalition must take most of the blame, given women hold only 17 per cent of its seats. The ALP is inching closer to its quota of 40 per cent (to be increased to 50 in the next decade) – and may reach it with the Queensland seat of Herbert.

Irrespective, the number of women MPs in the Labor Party is climbing.

Quotas work. They have worked in Afghanistan, in Argentina, and in Australia. Dozens of countries have employed them, with great effect. A study published in 2015 in the Legislative Studies Quarterly found between 1995 and 2010, the number of countries with gender quotas increased from nine to 43. And the number of women MPs globally almost doubled in 20 years.

Drude Dahlerup, a political science professor at Stockholm University, argues that if a nation’s leading party – like the ANC in South Africa – uses a quota, this can have a “significant impact” on the number of women MPs in all parties.

Now a new Australian study in June’s The Leadership Quarterly provides a substantial analysis of quotas in 190 countries from 1996 to 2015. Two of the authors, Victor Sojo and Melissa Wheeler from Melbourne University, concluded that that quotas do not work without strong enforcement, and “individuals using merit-based arguments against quotas may want to consider research that has shown women elected under quota systems have comparable qualifications (and performance levels) to their non-quota counterparts”.

What had been entirely unexplored until this year is if quotas have any impact on women becoming leaders.

Another new study, in the American Political Science Review found some answers to this by analysing 15 years of data from Sweden’s largest party. It determined that quotas first, “both immediately and permanently improved women’s access to leadership positions in municipalities where fewer women had previously held elected office.” Second, quotas had no impact on how long women stayed as leaders. Third, quotas encouraged better-educated women to run for office but that also, worryingly, quotas did not improve diversity in terms of age and income.

“What had been entirely unexplored until this year is if quotas have any impact on women becoming leaders.”

The Liberal Party knows it has a woman problem. And some female members have quietly but strenuously been arguing for quotas or targets for years, including former Senator Sue Boyce and former MP Sharman Stone and the Nationals’ Fiona Nash. But, even though there have long been quotas in the organisational wing of the Liberal Party, they have found little support. And yet while the Labor Party is gunning for 50 per cent representation by 2025, no one on the opposite side of the chamber is doing the substantial grassroots work done by the Liberal Women’s Forum in the 1990s to groom, train, fund and encourage women to run.

The reigning conservative orthodoxy is to say that quotas and targets are patronising, or a kind of “special treatment”, and would sideline worthy blokes. So here’s an interesting experiment; why not let the female party members have a secret ballot on the subject? That might tell us how patronised they feel.

The stigmas against quotas is a relic of the 1980s. They aren’t patronising; they are practical and pragmatic. And if the Coalition does not rapidly boost the number – and diversity – of women on their benches, they too, will become increasingly anachronistic.

Julia Baird is a host of The Drum on ABC.