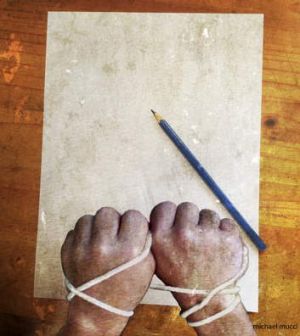 The editors of French newspaper Liberation said they were giving photography, a profession currently under assault, the ”homage it deserves”. They did this by leaving all photographs out of their paper one day, leaving blanks in their place, with captions to tell us what we were lacking.

It was a stark reminder not just of how much we rely on and need visual news images, but of the fact that these square white spaces represented work that is shockingly undervalued.

The ”series of empty frames”, wrote Brigitte Ollier, created ”a form of silence; an uncomfortable one. It’s noticeable, information is missing, as if we had become a mute newspaper. [A paper] without sound, without this little internal music that accompanies sight.”

Photographers routinely find their work used without attribution, reprinted without compensation or rewarded with rapidly shrinking rates of pay.

As some media outlets huffed about how much the ABC pays its top staff this week – and, unsurprisingly, that Kerry O’Brien was paid for his interviews with Paul Keating – the real story is that the work much of our media is built on is not paid at all. Writers, photographers, artists and cartoonists are all regularly insulted by being asked to work for free.

Many investors and media executives are complacent about this, and in fact exploit it by building business models that incorporate wages for managers, publishers, editors, public relations, marketing, IT consulting, catering and cleaning but not for writing.

It is often the work of the writers and journalists that is blamed for the death of print, and the devaluation of their work. ”Bias, partisanship, idiocy!” cry the punters. What is not blamed is the work of the business managers of media companies around the world who gave away the work of ”content providers” for free for decades. This practice has led to the continued and often unapologetic exploitation of a creative underclass.

In other words, shortsighted decisions media executives made about our industry have devalued not their work – which remains well remunerated – but that of journalists, writers and photographers, now called ”Slaves of the Internet”.

We all know, or should know, that it is bad practice not to pay people for hard work. The point should not need to be laboured. Occasionally it is loudly protested.

In 2011 a large group of writers boycotted The Huffington Post not long after Arianna Huffington sold the site for $315 million.

”Is exposure to Huffington Post’s extensive audience and widely recognised brand,” wrote organiser Bill Lasarow, ”simply a fair exchange for not being paid a penny?” They thought not.

Earlier this year, Nate Thayer, a freelancer who was asked by The Atlantic to repurpose a post for their site, wrote an angry piece that poured fuel on the bonfire of the resentment of freelancers who cheered him on social media. An embarrassed Atlantic apologised and assured people this was not usual practice and they did pay for commissioned stories. And, most recently, in Australia, arts writers boycotted the new site The Daily Review, published by Private Media (also the publishers of Crikey) because they were asked to write for free. One veteran writer, Andrew Stafford, said he had been informed there was no budget for contributors.

How can this happen?

What is perhaps worse is that when pay is given, it is often paltry, frequently $100 to $200 per piece. Editors boast that they ”pay” for writing and photos but do not offer enough for substantive, well-researched work. Some call, offer a tiny amount and plead you to just write something ”really quickly, off the top of your head”. A practice that does not encourage fact-checking and making phone calls to ensure originality, accuracy and fairness. A practice that does not, in short, encourage excellence.

This is why of all the new ventures launched in Australia’s concentrated media market, one certainly deserving of support is The Saturday Paper, soon to be launched by Morry Schwartz, and dedicated to the pursuit of in-depth quality journalism and analysis. As inaugural editor Erik Jensen says, if it were to have a motto, it would be to provide ”the whole story”.

It will also provide a wage. The rate is 80¢ a word for journalists not on staff – less than the $1 a word Schwartz commits to for publications like The Monthly – but it is the standard he insists will not be deviated from.

Jensen says the rationale is simple: ”We pay writers because we respect writing. Their work is at the very centre of our business model. Without them, we are a series of very attractive blank pages – and the market for this kind of postmodernist minimalism is limited, I expect.”

Many rightfully argue writers must not write for free, and photographers should not shoot for free. Otherwise we just validate an approach that treats everyone else’s work as business, and ours as play, a hobby.

This is true. Solidarity is important.

But the onus is not all on us. What of those readers who don’t ever expect to pay for content, for subscriptions or anything to be consumed on a device? This group is usually first to complain about a decline in the quality of journalistic offerings in Australia.

The greatest problem, though, is the business models that do not factor in pay for content. Schwartz has shown with The Monthly that there is another way. As Jensen told me, ”The very first cost in our business model is our journalism. Everything we do is an extrapolation from this simple fact. There was never a conversation in which we thought otherwise.”

Pay is not only about ensuring people can live, and eat, and house themselves and their families. It is also about the quality of journalism: lowering standards and work conditions for news-tellers fogs the lenses we all look through.

The Liberation experiment was very clever. Without work done for free, or very little, there would be an awful lot of white space online. And you don’t have to be a physicist to work out white space gets quickly filled with rubbish. It’s not silence we need to worry about, but noise.