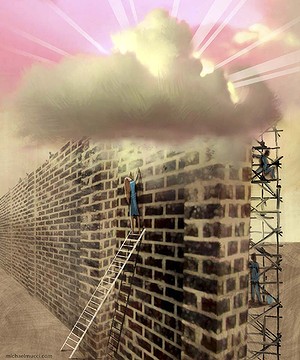 Illustration by michaelmucci.com
Sydney Anglicans are very fond of the doctrine of headship: the belief that men are the natural heads of women. They have gained a well-deserved reputation for preaching it often, loudly, and in increasingly inventive ways. Instead of obsessing on, say, poverty, or climate change, clerical men in Sydney often appear most intent on controlling women.

Who are, after all, a rather insurrectionary lot.

A new tack was aired in Saturday’s Herald, with the news that Sydney Anglicans are introducing a new, supposedly more modern marriage vow, where women promise to “submit” to their husbands (instead of to obey, which, you will have noticed, means exactly the same thing). Several questions sprang to mind: why bother changing this now? What, exactly, are they trying to address? Are the women getting out of hand? Disobedient? Stroppy?

And does it matter, in a broader cultural context, that there is a deep strain of misogyny in Anglicanism, and women are still described as subordinates? Is it just a private matter of belief? Or just arcane, irrelevant and even risible?

The reason it does matter is because there has been a slow, intense creep of anti-women sentiment in Sydney since 1992, when the national church voted to allow dioceses to decide for themselves whether they would ordain women priests. Since then, Sydney’s refusal to has become the touchstone of orthodoxy, where retrograde views on women are not just taught, they are flaunted as a subject of pride. Women cannot lead and rarely preach (unless only to other women and children.)

And what has not been reported is that now they are being told that not only must they submit to husbands, and men in their churches, but also, alarmingly, men in their workplaces.

The problem with the doctrine of headship has long been this: how do they explain the fact that women can be leaders in the business or political world – or even as queens, the heads of the entire communion – and yet must only act as subordinates and helpmates in the church? What would Anglicans think, say, of a female prime minister or governor-general?

For years, this question was fudged by priests who said the secular world was different to the church, but a new paper shows many would be extremely uncomfortable were a female leader to start “behaving like a man”.

An institute for women recently set up by Moore Theological College, called the Priscilla and Aquila Centre, was established “for the encouragement of the ministries of women in partnership with men”. Listed on its website, among teaching resources, is a paper titled “Christian women and leadership”, which asks: “If we accept that the Bible teaches male headship, then should Christian women accept positions in the corporate workplace where they will be leading men?” The billion (or 80 cents in the) dollar question.

The author, Caroline Spencer, concedes this might be an “irksome question to raise in our post-feminist, industrial world” – you think? – and stresses that this is not about assessing the capabilities or value of women. Just their position.
The answer she gives is that women can be promoted above men, but only if they do not start acting like men, “because, while male headship might not be extended into the corporate workplace, it should still be respected. Male headship is part of God’s good ordering for all society – not just his church.”

This is Patriarchy 101 – male rule everywhere is good for everyone.

Christian women, Spencer argues, must have a feminine leadership style, which means being “consultative, collaborative and relationship-building”. They should not be authoritarian, aggressive or directive, or lead in a coercive style or a “pace-setting” style, which means setting “high standards of excellence” and having “little sympathy for poor performance”. (One can only ponder the low bar for performance the alternative might present.)

An exception can be made if, for example, a building is burning down and a coercive leader is needed to save a life. Phew. A woman can tell you what to do if, say, you are on fire.

This paper is hugely significant because it reveals what is being taught at Australia’s most powerful Anglican theological college: that male dominance should define relations between all woman and all men. In other words, women must respect the headship of men everywhere. This is the first time I am aware of that this has been stated so baldly and so publicly.

Were Julia Gillard Anglican, she’d clearly be in trouble. Margaret Thatcher, too. Angela Merkel. Hillary Clinton. Condoleezza Rice. Helen Clark. Indira Gandhi. Have any female leaders not been accused of being aggressive or acting like men, simply when just leading?
The crux is that if we accept that the core of being female is being submissive, women can never lead anywhere, or fully use their talents. They cannot actually tell other people what to do, even if they know better. Another link on the Priscilla and Aquila website spells out that submission really means “having a spirit of amenability. It means being soft, receptive, responsive, and agreeable … An amenable woman is ‘leadable’ as opposed to ‘ungovernable’.” Pliable, malleable, ductile.

You would think that by incessantly telling women to submit, you would encourage revolt. History shows this to be true. And the more women have made gains politically, the more inroads they have made into the corporate world and the better educated they have become, the more the local church has tried to crush and contain them.

This paradox has defined the Sydney Anglican Church; and their response has been to build higher fences. You need only to look at our federal parliament to see the horse has bolted.

Journalist Julia Baird is a former member of Sydney Anglican Synod and the Movement for the Ordination of Women.