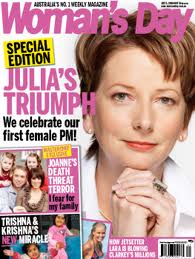 ‘So let’s draw back the curtains and let the sunshine in,” said Julia Gillard on hearing of her narrow victory in Australia’s general election. “Let our parliament be more open than it was before.”

Australia’s first female prime minister scraped back into power with words which might make one imagine that she was a woman, like many others before her, who was determined to change the parliamentary system: to make it more transparent, honest and accountable; to enter a chamber that a former leader of the Democrats called “awash with testosterone”, and bring in a stern, but comforting female presence.

This is, after all, something women have promised – or threatened – to do for well over a century, from the suffragettes onwards. The irony is that this is something Gillard did not promise: she did not campaign on the grounds of her gender, and she did not claim to do politics any differently.

But, strangely enough, a different kind of politics was what voters wanted after all. Now she has been forced into promising greater accountability after an excruciatingly close election, and 17 days of pleading, begging and deal-making before three independents decided who they would support, leaving Gillard’s Labor party with 76 seats, the Coalition 74.

Before becoming party leader, Gillard, a former lawyer with a record of fighting for the rights of workers and women, was seen as a true political operative – a party player and a knife-sharp debater. She is, primarily, a pragmatist who played the political game to perfection before grasping the top job. She was straight with the media, did not pander to any of the stereotypes Australia’s political women have been trapped by before – of saints, seductresses, wide-eyed housewives who stumbled into parliament, or “steel Sheilas” who wanted to be like Margaret Thatcher.

She also batted down personal criticism with humour. Gillard told biographer Jacqueline Kent, when she was once standing next to a board with a large photo of her: “This old guy comes out of the supermarket, looks at me, looks at the photo, then turns back at me and says, ‘Taken on a good day wasn’t it, love?’ I said, ‘And you’d be bloody Robert Redford, would you mate?'”

Initially, the public warmed to someone who seemed authentic and real. During the election, the fact that Gillard was a woman was irrelevant and only ever a vague distraction when the snipes about the fact that she had not married her boyfriend, had no children and did not cook emerged.

But overall she ran a poor election, and lost much ground to the more disciplined leader of the Liberal party, Tony Abbott. Her uninspiring rhetoric, gaffes, and a foolish remark about allowing the “real Julia” to emerge halfway through the campaign (who were we seeing before?) played into often sexist smears that she was a puppet of the hard-right men of her party.

The greatest problem of this election, and the reason it was so close, is that voters stopped caring; many leaving ballot papers blank. It was, in essence, the failure of small target politics, where both parties were scrambling for the middle ground and focused on attacking the other side.

The time for smallness in Australian politics has surely gone. The Labor party needs to articulate a compelling worldview, to appeal not to the fearful demons but the “better angels of our nature”, as Lincoln said. To quell racism in immigration debates, not stir it up. Unlike the US and Britain, the economy has not been the predominant concern for voters – the country almost coasted through the financial crisis – but Australians are looking for a leader who might capture their imagination.

This is Gillard’s challenge. She needs to show leadership on climate change and allow the conscience vote on gay marriage that the newly muscular Greens, who now hold the balance of power in the senate, would like. Australia needs a more clearly articulated foreign policy and to acknowledge its enormous dependence on exporting to China.

Gillard should also make the prime minister she deposed, Kevin Rudd, the minister for foreign affairs – given his aptitude and knowledge of the subject, his popularity, and the lingering resentment at how cynically he was toppled.

Gillard has to show her substance, and demonstrate, even with such a slight majority, that her party is about more than the pursuit of power. It should not matter that she is a woman. But it does matter that voters are sick of the old boys’ way of doing politics. She must show she is capable of responding to the electorate’s desire for politics to be done with the transparency and openness she has promised. Perhaps she also needs to show, as Thatcher said: “It may be the cock that crows, but it is the hen that lays the eggs.”

Originally appeared in The Guardian September 7, 2010