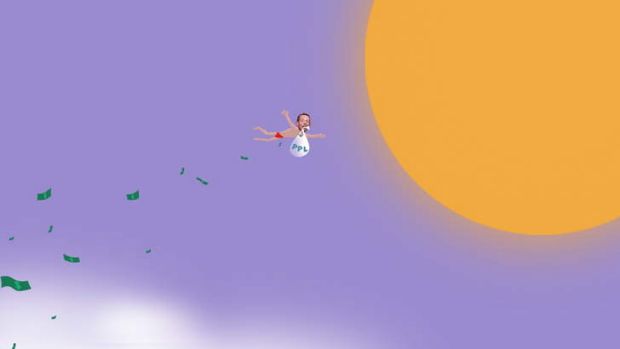 This election campaign has officially pitched tents in Topsy Turvy Land. One candidate after the other has backflipped, redoubled and channelled their spiritual opposite for the purposes of sport and spin.

Billionaire Clive Palmer aped Miley Cyrus by twerking for radio hosts (if you haven’t heard of this revived dance move, you only need to know it involves excitable pelvic thrusting and jiggling bottoms). Julian Assange impersonated John Farnham by donning a mullet and singing a WikiLeaks version of You’re the Voice. Kevin Rudd channelled John Howard and injected steroids into the Pacific solution he had previously dismantled.

And Tony Abbott, who once said paid parental leave would be introduced over his dead body, has become the Betty Friedan of Australian politics, daily fending off accusations of gross generosity to the working woman.

Upside down, wrong side up, topsy turvy.

It would be hard to find a female MP with children who did not take maternity leave, and did not wish for it to be longer. But their voices have been largely absent from this debate as Abbott and Rudd have duked it out with voices calibrated to assure working women: “we get it”. Right, and we do it. In 2011-12, 99.4 per cent of those who took parental leave were women.

One result of seeing few women politicians talking about paid parental leave is that it has seemed divorced from personal experience; not something every working woman needs when she falls pregnant, but a luxury for the elite.

The resentment about working women that has crept into the paid parental leave debate has been troubling. Twitter has crackled with those furious at paying for “rich women to breed”, even though we already have paid parental leave, introduced by Labor in 2011 – and the Coalition policy will be paid for by (a very disgruntled) business.

In the second debate, small business owner Ian Barker asked: “Why should a forklift driver in Mount Druitt [pay] so a pretty little lawyer on the north shore earning $180,000 a year can have a kid?”

Given this stereotyping, it was baffling that Abbott chose to launch his paid parental leave in a cafe in Melbourne’s wealthy Malvern. Fairfax Media reports detailed the Range Rover dealership opposite, the $70 fruitcakes for sale, the Louis Vuitton handbag lying on a table.

The Coalition scheme is not cheap, though this week it claimed the leave policy would actually add $1.1 billion to the budget bottom line for the first two years.

Naturally, given the dire state of the budget, Rudd has been querying its affordability: there should be a limit to the number of women paid over $150,000 being able to access the $75,000 worth of leave. The Greens have suggested a cap of a wage of $100,000. But women aged between 18 and 49 who earn more than $100,000 comprise only 1.7 per cent of all those with taxable incomes according to the Coalition policy document.

Not a large group.

Parental leave is not about greed or a grab for cash. It’s about a community response to protecting the first six months of a child’s life. It’s also about recalibrating a severe financial disadvantage women suffer by having children, including large swaths cut out of lifetime wages, super, and choked career tracks.

What is worrying is that some are now questioning the need for leave at all.

John Laws – who opened an interview with Therese Rein on Thursday morning with the killer question “A lot of people say ‘why isn’t she Therese Rudd?'” – reflected this view. “Why do we even have paid parental leave?” he said. “If people can’t afford to have children they shouldn’t have them, should they?”

“It depends,” Rein answered, “whether you want a shrinking population or not.”

Tim Wilson from the Institute of Public Affairs also put this argument on ABC’s Q&A: “I despise this attitude that is creeping into society where we increasingly look as children as a burden and not a blessing … it’s not my choice that women have children. It’s genetic!”

The sharp Sally Warhurst reminded him the burden of childrearing has always fallen on women. She argued for more funding for childcare, not costly, extended paid parental leave, on the grounds that it lasted more than six months.

This is true. What’s frustrating is the idea that women can be thrown only one bone at a time: paid parental leave or childcare.

All experts say we need more than one plank to improve women’s workforce participation and compensate for the penalties women incur when they have babies. The 30 members of the Work And Family Policy Roundtable who represent 18 Australian research institutions assessed major parties on policies affecting women and found the Coalition’s paid parental leave was better for women due to length, pay and superannuation.

But some are concerned that, given the opposition of business and a large swath of the Coalition to the policy, it will be hammered out of shape after the election.

The roundtable also found the Labor policy on childcare to be superior, given the Coalition would hold a productivity inquiry into its affordability, while Labor has promised to raise wages of underpaid childcare workers, as well as implement national quality standards and provide more support for out-of-school care.

The real problem is not working women but inequitable wages.

“Wage replacement is fair, that’s what women need,” Sydney University employment relations professor Marian Baird says. ”The problem is that women are paid poorly, so we get huge discrepancies occurring. But this is about wage inequity per se, not paid parental leave.”

Then there’s the wage gap. In 1970, women earned 59.1¢ to a man’s $1; in 1975 it was 77.4¢, and in 1979 it was 80.6¢. Today it is a mere 83.5¢. The difference between fathers and mothers is much greater. Women with children earn about $1.3 million between the ages of 25 and 64, while men with children earn $2.5 million over the same time. There is a resulting chasm in superannuation earnings. This is, of course, exaggerated further for women who have children with disabilities or who have ageing parents.

Are these the blessings women are supposed to count? Anything bad can seem good in Topsy Turvy Land.

It doesn’t take much to wonder why the economy will determine women’s votes in this election.