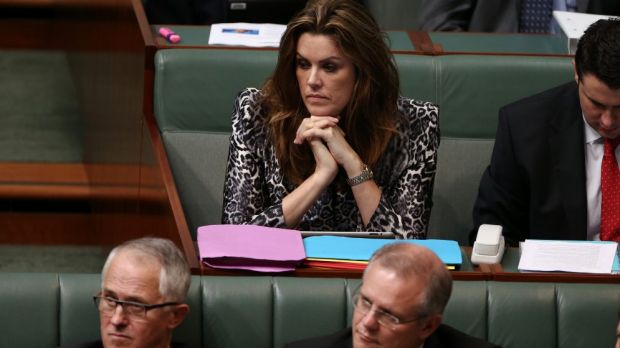 Australians are never quite sure what to think of powerful right-wing women. They are frequently caricatured as anomalies or bitches, as evil or iron. Freaks!

Women who have especially hardline views are rumoured to have a streak of Satan in their souls – much like the hurricanes with female names which kill almost twice as many people as “male” hurricanes.

(If you missed that particular tidbit, this week a study found people were less likely to take female-named storms seriously, so fewer took precautions or hid in shelters. Which is a bit depressing, because of all the forces you’d imagine being capable of breaking a glass ceiling, a hurricane would be one of them.)

It’s not worse than the venom directed at other women in the public eye, but it is a particularly personal kind, perhaps because we find it easier to imagine women as soft, conventionally compassionate or malleable.

When I was editor of this paper’s opinion page, Miranda Devine provoked significantly more rage than the male columnists – no matter their views – and responses to her were more personal and pointed. When Anne Henderson appears on the ABC’s The Drum, the bile directed towards her outweighs that directed at almost any other male panellist (Henderson does not see this as about conservative women, but “all strong women whom misogynists don’t agree with”).

Whatever your politics, you can’t help but notice it.

This is why the slurs on the formidable Peta Credlin this week were not particularly surprising. She has long been said to have somewhat a sinister or “undue” influence on her boss – instead of, say, doing her job of advising the Prime Minister. As though women don’t persuade, they enchant.

To recap, on Monday night Clive Palmer was in Parliament sounding forth about paid parental leave to a near-vacant chamber: “Why should Australian citizens and businesses be taxed, and working women discriminated against, just so that the Prime Minister’s chief-of-staff can receive a massive benefit when she gets pregnant?”

This was wrong and offensive on several levels. First, PPL is not Credlin’s personal policy, but one Abbott touted before he worked with her. Second, Credlin is already eligible for benefits offered to public servants – the point of the PPL scheme aims to extend this to others.

Third, it is misleading to suggest PPL would benefit only a tiny group of high-earning women, instead of all working women, most of whom would be on better packages. This is not greed.

Fourth, and worst, it was particularly disgraceful because the respected Peta Credlin has been through several unsuccessful rounds of IVF – always a difficult and painful process. Yes, Credlin had revealed her battle with IVF to a reporter in the past, but flinging the most intimate struggles of a staffer into the public sphere to prove a political point is a shameful thing to do.

Palmer claims he had not known of Credlin’s fertility struggles, and offered a weak, qualified apology: “I told her it was a matter of great regret if I offended her personally, right, but I was using her because she’s a successful woman, she’s getting a high salary.”

He dug deeper with his follow up comment that Credlin was “the top enchilada”. “She’s the top dog – oh, I shouldn’t say that. She’s the boss.”

Because a female dog is a – oh wait! The heads of thousands of women across Australia landed with a thud on their desks.

Then again when Barnaby Joyce chipped in to say he had “good information from her husband [Liberal Party federal director Brian Loughnane] that she is a woman”. The old “powerful women are really men in drag” meme seems to never die.

Another common myth is that sexism is partisan. Many on the left remain convinced only those on the right are sexist. Many on the right think that the left only ever attack the right on the subject. (Assuming, of course, we all live on sides, which is another matter). In truth, all are guilty of leaping with greater vigour on sexism when it targets a woman whose politics they agree with.

But the front-page story in The Australian declaring feminists were “silent” about the Credlin remarks was wrong. There was plenty of reaction, if initially more muted than in other cases. That Anne Summers was on deadline for her magazine instead of prowling Twitter for insults was cited as evidence that feminists didn’t care, which is ridiculous.

And The Australian is certainly selective about which women it worries about: it was hardly outraged over the sustained sledging of Julia Gillard. And because of the relentless sexism directed at our first female PM, some on the left are now unwilling to object when it is directed at other women. Even a mild tweet in support of Credlin prompts a barrage of illogical responses such as: ‘WHERE WERE YOU WHEN JULIA GILLARD WAS BEING HAMMERED?”

Even if you can point, for example to columns you might have written on exactly that.

The Prime Minister finally weighed in to warn: “Blokes around this place have learnt to underestimate women at their peril.”

Was this a gauntlet thrown?

If so, Abbott would be wise to know that appointing just one woman to Cabinet is blatant, empirical evidence of the underestimation of women.

Ignoring this fact imperils a lot more than witless jokes about women in drag.