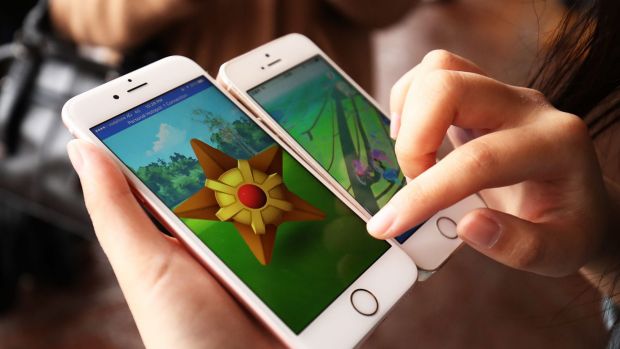 Oh how they laughed. It was one of my more inglorious moments – and I have to admit, I’ve had a few – and, unfortunately, a small crowd waiting for a bus at midnight witnessed it. I had stumbled off the kerb in search of a PokeStop, my eyes locked on my screen, when I fell, rolling head over feet. My friend, a barrister whose view of all popular culture after Jane Austen veers from bemusement to contempt, stared down at me, yelling: “YOU ARE IN A BUS LANE!”

I could not stop laughing. After just an hour spent playing Pokemon, a mostly respectable mother of two, I had already become a cliche.

The stories of Pokemon Go fools, bumping into walls, crashing into cars, falling off bicycles, walking across TV sets, are legion. Just this week a 62-year-old New Yorker was chasing bouncing little monsters though woods when he got stuck in waist-deep mud and had to call 911.

It’s not surprising though, given that there are 20 million or so of us walking around playing this augmented reality game – where cartoon characters we capture and battle with are superimposed on to our surroundings, viewed through mobile screens. As Om Malik wrote in the New Yorker: “To say it has spread like wildfire is to exaggerate the power of wildfires.”

The reason for Pokemon Go’s success has already been debated – the sense of community, the nostalgia for the card game, the fact that it forces us to walk outside, as we gather points on PokeStops – connected to local landmarks – and nab flittering bats, angry crabs and other odd creatures. It’s funny, distracting, oddly communal. And yes, addictive, and I may soon tire of it.

But what I was not expecting was that it would add a sweet new dimension to my relationship with my kids, especially my seven-year-old boy. He has long been obsessed with Pokemon cards, partly because of the social currency they offer in school trading, as well as the complex arithmetic-driven games and the sticky lure of its imaginary world.

He has tried to explain Pokemons to me and I have tried to listen. I have also tried to play the card game with him but the rules seemed arcane, arbitrary and hard to follow.

But now I have entered this strange space in which his expertise is greater than mine, in which he expands and glows. The look on his face when I came home from work a new convert, having spent my commute throwing balls at monsters on trains and ferries, and announced we were going out for a quick walk to catch Pokemons, was joyful astonishment mixed with disbelief. He stared at me like I had given him a piece of glass, not realising it was a diamond.

We walked around a nearby park, zapping away, holding hands, laughing with his sister, as he explained it to me in a torrent of words – the levels, the creatures, the different genetic strains and capabilities. I also realised the reason he became so adept at doing maths sums in his head was because he had been calculating the numerical impact of monster battles.

When I tucked him into bed that night, he beamed as he curled under the covers: “I am so glad you like it, Mum.” And so I realised this odd game actually can provide an opportunity for adults to access the interior world of their children in an entirely unexpected way.

Yes, it’s sucking up data, I’ve already spent $1.49 on extra balls and if I see one more Zubat or Pidgey – the ball-chewing creatures of the Pokemon world – I will scream. The fact that a PokeGym is located at my local McDonald’s is highly suspicious and of course it’s all mad, intrusive, raises a bunch of trespassing issues and doubtless is deep-drill data-mining.

But my children are begging me to walk 10 kilometres this weekend so some of their eggs can hatch (don’t ask). Surely the fact that it takes place outside the house and does not involve being shackled to a console is one of the reasons that so many women have picked up this game – according to SurveyMonkey Intelligence, almost two-thirds of users in America are female (63 per cent).

Some will naturally fear it just teaches kids to become gamers. But it also teaches parents that their kids are not just staring at screens, but navigating a complicated, often delightful, occasionally repetitive galaxy they and their friends gambol and fight in. And that while we are rightly preoccupied with the dangers of addiction, we should not forget how their imaginations can crackle and flare in parallel universes.

Technology often impedes wonder and motion, but it can also stir it.

The bruises on my knees can attest to that.

Julia Baird is a host of the Drum on ABCTV.