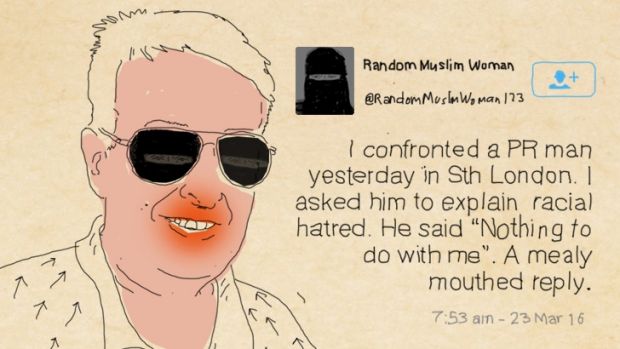 Forty-six year old Matthew P Doyle, a partner in a PR firm in South London, is what might be best described as a charmless character. Yet until recently, he was relatively innocuous, with his rants in public forums like Twitter usually confined to railing against migration and rival rugby teams.

But this week he found himself launched into orbit with this tweet: ‘I confronted a Muslim woman in Croydon yesterday. I asked her to explain Brussels. She said “nothing to do with me”. A mealy mouthed reply.’

There are so many implicit, ignorant assumptions in these few words: that the onus is on every Muslim to explain extremism, that it is appropriate to approach strangers on the street to ask for explanations of complex geo-political crises, and that this stranger must be fulsome, beaming and generous with her time and response, not ‘mealy mouthed’. Must be pleasant in the face of racism, tolerant of intolerance.

And the responses to Doyle’s peculiar thought-stream were swift and delicious, under the hashtag #mealymouthed. Some wondered what explanations might be sought from white European men: “I approached a white man in Camden this morning, asked him to explain Anders Breivik.”

Another: “I confronted a German about bombing my Grandad’s shed in WW2. ‘Nothing to do with me”. @marcuswstow wrote: “Hey mate I’ve chosen you at random for my ancestors’ slavery reparations please DM me for my PayPal”.

When Doyle was asked by a reporter if he asked Jewish men wearing skullcaps to elucidate the enduring conflict between Israel and Palestine, he was indignant: “Absolutely not!” Surely he could ask Christians, too, to explain the Ku Klux Klan, which (falsely, of course) claims to be based on Christian morality.

Other responses were more random: “I confronted a person with a guitar and asked them to explain Coldplay.”

And the favourite in my office: “Confronted a ginger person yesterday. Asked him to explain Ed Sheeran. Said “Nothing to do with me”.

I’d actually quite like someone to explain Kanye West. And the belfie (butt-selfie). I will never understand the belfie.

Others punned: “I confronted a woman in Croydon and asked her to explain shredless marmalade. ‘Nothing to do with me’. A peely-mouthed reply.”

When he tried to defend himself, Doyle just dug his shovel deeper: he was “having a hard time” with it, he was “emotionally fuelled” and, “it’s not like I’m a guy with tattoos who pushed her against a wall.” Because tattoos are far more offensive than prejudice, is that it? He declared he had a Muslim neighbour who he once helped after a burglary. Then he jousted: “Thanks all you tweeters for proving I can still do PR. I really was thinking about throwing the towel (head) in!” Yes, he actually said towelhead.

The exposure of ignorant thinking about Islam, and who is responsible for terror attacks (hint: extremists who support, fund, conduct them) is excellent in any forum.

By all means shame and embarrass, but shutting down this entire discussion will only fuel the fear-mongering, paranoia and suspicion currently boosting the popularity of far right groups in Europe.

Because Doyle’s ranting is not a random social media occurrence, easily ridiculed and swept away. It was a rip in an ocean of commentary, reflecting deeper, foul tides of xenophobia and Islamophobia, fuelled by bombs and fear and anxiety and capitalised on by a newly muscular surge of right wing politicians. In Europe, hate crimes are on the rise.

Throughout Europe we are witnessing what the Economist called “the march of little Trumps”. Nationalist, far-right anti-immigration parties with politicians who frequently smear Muslims are leaping in the polls and parliaments in France, Poland and Sweden as well as the Netherlands. In Hungary and Denmark political parties who oppose immigration have formed or are sharing government.

And what of the 1.5 billion Muslims in the world, the vast bulk of whom live peacefully, and to whom acts of terror are anathema to faith?

In 2014, a letter signed by more than 120 leading Muslim clerics and scholars – from countries including Egypt, America, Nigeria, Canada, Pakistan, and Indonesia – was sent to the head of Islamic State, Abu Bakr al-Baghdadi. It laid out the religious texts cited by those waging terror against the west and argued, powerfully, that the religion of Islam provided no basis, or legitimacy for the work of Islamic State.

And we know how crucial it is to work with the vast moderate middle, to do whatever possible to enable the reformers, quash the extremists. So when people mouth, air stupid things, bat them away. Talk about it. Air it. This is not a debate about who to block or mock on Twitter – this is, for millions, a debate about who to vote for. And Matthew Doyle, naturally, supports Donald Trump. The leading contender for Republican presidential candidate wants to stop all Muslim immigration, and conduct illegal acts of torture, waterboarding and “worse” not just ostensibly to extract information – despite lack of evidence to show it works – and to punish.

As numerous European politicians and correspondents pointed out this week, ignorant attacks on Muslims only plays into Islamic State’s hands.

To Doyle’s question of “who cares if I insulted some towelhead?” A lot of people, mate. More than you knew.