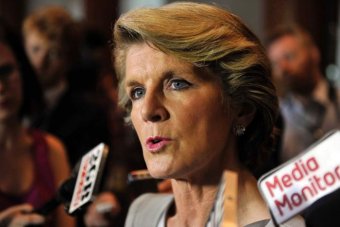 “I don’t think ambitious is a bad word.”

I have always admired Julie Bishop. She has pluck. Discipline. Focus. Her career – and her very demeanour – epitomises someone who is careful, and driven, who stares fixedly at a goal and then achieves it.

This was beautifully evident in the story she told Annabel Crabb on Kitchen Cabinet: as a child, preparing for a cooking competition at Brownies, she spent several weeks baking batch after batch of cupcakes in order to perfect them before being asked to produce them. How many primary school children do you know with this level of perfectionism?

And, of course, she won. Bishop is the type of person who wins, and relishes winning. At school she was head prefect, president of the debating team, captain of the netball team. When she was a lawyer, she became the first woman in Perth to be managing partner of a large law firm.

This was why it was striking to see a headline on the top of the Sunday Telegraph yesterday saying, “Julie Bishop interview: WOMEN JUST CAN’T HAVE IT ALL.” These were the only words, dragged from an incisive and well-written profile, to be splashed on the front page, thudding fear – or frustration – into female hearts.

Another powerful woman whose success is held up not as an example of possibilities for women, but limitations.

Bishop told the reporter that women “can have plenty of choices, but at the end of the day they choose something which means they can’t have something else”. The implication was that her choice was to forego having children for a demanding career, and she was philosophical about it:

I’m in my mid-50s. I’m not having kids, there’s no point lamenting what was or what could have been. I was 40 when I went into politics and the window closes pretty quickly at 40. So politics is pretty much my life.

Now I know the views, myriad experiences and expectations of women should be respected. Bishop is not complaining – and if the essence of character is, as Joan Didion has written, taking responsibility for one’s own life, this is exactly what she is doing. Gillard is the same. Respect.

But it would be a shame if the lesson we take from the varied lives of our most powerful women is that children and career is a dichotomy. Life is complicated and our loves, families, fertility, careers, timing and desires rarely match what we plan or hope. Women who choose not to have kids should not be continually grilled about it.

But millions of mothers do actually work. Even in politics. Tanya Plibersek, Jenny Macklin, and Penny Wong are all members of Cabinet. Enid Lyons, the first woman to be given a seat in Cabinet in 1949, had 11.

Imagine John Howard getting teary about not being a good father because of the demands of politics: “I should have known I could not do both. What was I thinking? Someone else should have led the country.”

Despite the height of the ladders female politicians have climbed, we are still getting messages from both sides of Parliament that politics is too difficult for mothers. Attorney-general Nicola Roxon said when announcing her retirement: “If I did contest this next election and run for a sixth term in parliament, she (her daughter) would be starting high school before I might retire.”

I get it. The hours and demands are relentless. But the message this gives young, aspiring female politicians is troubling.

The very concept of having it all is ludicrous – for a man, work and family are basic building blocks of life; the male version of having it all would be more likely to involve private islands, Ferraris and a lifetime supply of beer. But for women, doing what men take for granted is implied to involve greed as well as pain.

When talking of whether women in high places can “have it all”, Bishop was referring to an influential piece by law professor Anne Marie Slaughter in The Atlantic titled ‘Why Women Still Can’t Have it All’. Slaughter had worked as the director of policy planning for the US State Department in Washington, where she commuted on a weekly basis, only seeing her children on weekends. She did not give up her career, as some now believe – she gave up Washington, and went back to live full time with her family and work as a law professor at Princeton.

Now, she wrote, “I teach a full course load; write regular print and online columns on foreign policy; give 40 to 50 speeches a year; appear regularly on TV and radio; and am working on a new academic book.” Not what you would call opting out.

Slaughter received so many responses pointing out men don’t have it all either that she later wrote that she regretted using the term “having it all” – which implies an unrealistic greediness on behalf of mothers who need or want to work – and wished she had called her article: “Why Working Mothers Need Better Choices to Be Able to Stay in the Pool and Make It to the Top.” Which is not as sexy, and unlikely to appear on the front page of a Sunday tabloid.

Better choices are, after all, what both political parties are arguing they are offering right now: flexibility, paternity leave, child care. The Government has already proposed some minor changes to the Fair Work Act, allowing more people to ask bosses for flexible arrangements, without having a system of review or appeal in place to check decisions made. These announcements will and should be closely scrutinised. A stiff competition about truly aiding working parents in this election would be most welcome.

When I asked Bishop for ABC’s Sunday Profile in 2006 what she thought of the constant focus on the fact that Labor leadership contender Julia Gillard did not have children, she responded:

I am waiting for the day when commentary about politicians focuses on their abilities, their beliefs, the strategies that they put forward, the policies that they believe in rather than the fact that they are a woman or indeed a man, and I think we need to get away from that novelty factor female politicians seem to attract because as I’ve pointed out, there are many women in Parliament now.

Hear, hear. We’re all still waiting for that day.

This article originally appeared on the ABC’s The Drum, here.