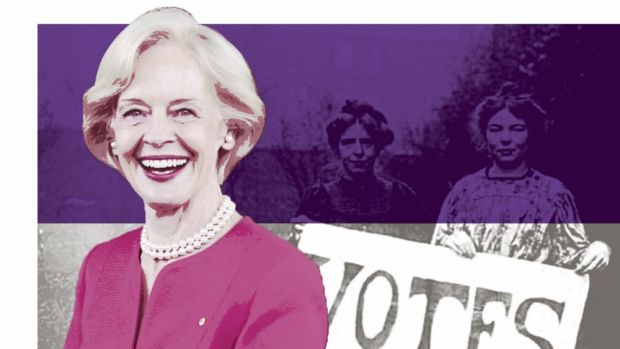 Dame Quentin Bryce has mastered the art of the subtly powerful gesture.  When she – our first female governor-general – swore in our first female prime minister on June 24, 2010, she wore a dress the colour of rich butter. Pinned conspicuously below her shoulder was a brooch of purple silk flowers, with green linen leaves and white stems. The colours of the suffragettes.

She has since donated this brooch to the Museum of Australian Democracy.

We were reminded, again, of the depth of the former lawyer’s commitment to the cause of women when Bryce’s official portrait was unveiled at Parliament House this week. The artist Ralph Heimans said she was wearing “suffragette purple,” because she had asked to be “represented in the colour of the women’s movement”.

So subtle has her work been as governor-general, that many have completely missed what Quentin Bryce has done for women, and how extraordinary it has been to have a feminist occupy that position.

The irony, of course, is that Bryce, a past sex discrimination commissioner, was excoriated about her clothing. While her elegant style is almost universally admired – there is even a tumblr devoted to “the fabulous outfits of Quentin Bryce … because she is perfect ” – the likes of Piers Akerman dismissed her as a “clotheshorse”. Akerman seemed relieved our new Governor-General, General Peter Cosgrove, will be able “to get by with a dress uniform on most occasions … Apart from changing from summer to winter rig, as seasonally demanded, they should be almost indistinguishable”. Phew!

It was quite delicious though, watching Dame Quentin’s pop of bold colour in a monochrome sea of suits. When she swore in Tony Abbott’s almost all-male cabinet, she wore a screamingly pink outfit with matching shoes: a vivid reminder of what was missing from the line-up.

Yet, more importantly, in the past few years Dame Quentin has quietly supported thousands of individual women in their endeavours: running orphanages in the Middle East, writing books, running for Parliament, creating art, chairing boards, fighting for the rights of indigenous people. She has hosted innumerable lunches and dinners for women in her home, marked International Women’s Day with official events, and spoken powerfully in speeches about the need for women to have a good education, and to live lives free of violence.

Sex Discrimination Commissioner Liz Broderick told me this week that one of the hallmarks of Bryce’s term had been an “inclusive approach”: “I can’t tell you how many different events she’s had for women. I remember going to the hundredth anniversary of International Women’s Day in Yarralumla, being welcome into Government House by a self declared feminist governor-general. It was a good moment.”

Bryce has also spoken strongly – and subtly – on matters important to her, most notably paid parental leave. In 2009, after the Productivity Commission recommended a universal paid parental leave scheme (18 weeks for mothers and two for fathers) she said: “Leave for parents is absolutely vital for strengthening families. All women need support when they’re having babies and their little family’s in formation.”

In the recent Boyer Lectures, Bryce made hugely provocative comments, in the gentlest, most careful fashion. She ended her lectures by saying her hope was Australia might become a nation where “people are free to love and marry whom they choose”.  Boom.

“And where perhaps, my friends, one day, one young girl or boy may even grow up to be our nation’s first head of state.”

And boom. A republican governor-general!

“Bryce made hugely provocative comments, in the gentlest, most careful fashion.”

There has been much scratching of heads this week about why an avowed republican would accept the title of Dame. In truth, she had little choice. It would have seemed churlish to refuse in her final hours, especially because it is now built into the position of governor-general: refusing would involve a very loud, awkward change to the Letters Patent.

Asked if the reintroduced knight and dame title were a “prerequisite for a governor-general designate to accept before they’ll be appointed”, Tony Abbott said: “there is no reason why a Prime Minister could not change the Letters Patent if necessary to accommodate someone who, for whatever reason, was reluctant to be a Knight or Dame in the Order of Australia. But people who love our country, who want to serve our country should they be approached to serve in this particular capacity, I think would normally be happy to accept this honour because, in the end, yes, it is for people who have served our country in an extraordinary and pre-eminent way.”

In other words, you could say no, if you wanted to be rude and did not love our country. So Dame she is.

The reason the suffragettes chose the colour purple was because it represented dignity: white stood for purity and green, hope (Mrs Pethick Lawrence, who chose them, wrote purple “stands for the royal blood that flows in the veins of every suffragette, the instinct of freedom and dignity”.)

You could not have a better word to describe Dame Quentin than dignity.

When O’Brien told her people believed she had “kicked more chauvinist male butt with her high heels than the whole boiler suit brigade put together,” Dame Quentin told him she actually used to proudly wear a “fantastic boiler suit” in the 1970s.

It’s a nice image isn’t it? Royal blood in a boiler suit.