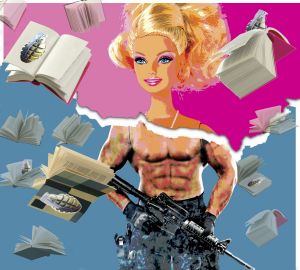 Does playing with pretty dolls mould the minds of little girls?

When she was small, Lateline host Emma Alberici was “mad obsessed” with Barbie. She had all the accompanying paraphernalia, including the campervan and wardrobe; her older sister spent hours sewing tiny clothes for the pneumatic plastic dolls Emma doted on.

7:30’s Leigh Sales loved Barbie too, though she did play with her brother’s Star Wars figures when he forced her to. Mia Freedman played with Barbie’s more wholesome counterpart Sindy. Comedian Corinne Grant liked Barbie. So did feminist Clementine Ford.

These women are hardly decorative, insipid or shy about their intelligence. As Sales puts it: “I don’t reckon it turned me into a shrinking violet”

When Larissa Waters introduced the “No Gender December” campaign against gendered toys this week, she argued “starkly separate aisles of pink and blue” could set “strong gender stereotypes” which “can have long-term impacts”, on “self-perception and career aspirations.” Then, veering into dramatic overreach, she argued “outdated stereotypes” prop up gender inequality, “which feeds into very serious problems such as domestic violence and the gender pay gap”.

This was quickly reduced to: “toys lead to violence” which is nonsense.

But after the hooting stopped, the question was left dangling: do the toys you play with as children shape the adult you become?

The research on gendered toys cited by the No Gender campaign does not mention domestic violence, or long-term impacts. The landmark paper is by Judith Blakemore and Renee Centers of Indiana University, published in the journal Sex Roles in 2005.

They found boys’ toys involve not just more aggression and violence, but more risk, danger and thrill, and they required more adult supervision. Those exclusively for girls were predominantly oriented to their appearance, and nurturing. This will surprise no parent, and trouble many.

The conclusion was fascinating: toys marketed exclusively to either gender were inferior in terms of brain development – neutral or moderate toys were better for “educational value, scientific qualities and stimulation of physical and cognitive skills.”  Think, say blocks instead of toy bullets or lip gloss.

But, by conducting my own (not-at-all) scientific survey of Colleagues and People I Like, I found a few core caveats to this important research.

First, the Barbie spell is usually a brief one. By 10 Alberici was a short-haired tomboy who rode a BMX everywhere and “liked that people often mistook me for a son” (though she still had a soft spot for “my mate Barbie”.)

Second, girls often apply a critical eye to their dolls. Today show host Lisa Wilkinson had a doll called Skipper: “a more flat-chested, shorter, slightly younger brunette with a touch of the tomboy … much more me. Barbie by comparison was out in the big wide world, and it always annoyed me that she could never decide on a career. For God’s sake woman, PICK ONE.”

Some girls cut their dolls’ heads off or mutilated them. Author and broadcaster Sarah Macdonald lined up her dolls and just “bossed them around”.

Third, siblings are crucial for toy diversity and choice. Investigative journalist Sarah Ferguson had two older brothers and says for probably the only time in her life “felt a very strong urge to fit in”.

So she played with action men. “I particularly liked the Norwegian Ski patrol action man who wore a white cotton ski suit and had a rifle on his back.”

Sugar-free author Sarah Wilson never owned a doll. She and her four brothers had a communal pool of toys, gender neutral by default. Her parents did not praise her for how she looked, but “always for what I did and my physical achievements. I’m quite grateful for this.”

Kitchen Cabinet host Annabel Crabb also had two brothers, with whom she made rafts and cubby houses and shot things with her toy gun, while wearing their hand me down clothes.

“I had one Barbie doll (which I loved, furtively)” she says. “I always felt slightly embarrassed when discovered playing with girly stuff. But I did secretly want to, quite badly.”

Fourth: we are far more derogatory about girls’ toys than boys’. And only girls talk about the shame of playing with their toys. So why, asks Ford, do we “deride typically girly toys as stupid or boring or unexciting?” Good point.

The men I spoke to had no interest in their sisters’ toys and were simply nostalgic. PM presenter Mark Colvin loved a cowboy costume he was given when he turned six – “The full rigout, with a waistcoat, 10 gallon hat, chaps and 2 six-guns in holsters” – but now is most ashamed of the fact that he had a gollywog:  “Ghastly to think of.”

Similarly Spectator editor Rowan Dean cheerfully recalls spending hours killing German toy soldiers with American GIs, and terrorising the kid who lived across the road – “a little squirt of a fellow called Campbell Newman” who went on to greater heights – with his tomahawk, while clad in an Indian headdress and equipped with bow and arrows. Make of this what you will.

Finally, my own view is that books matter more than almost anything. I had a couple of Barbies I was briefly interested in, but it was books that shaped my childhood. Author Nikki Gemmell was a tomboy who still sports a muffler burn scar on her leg from the trail bike she raced against her two brothers.  But there was something else that obsessed her: “books – the best education in empowerment for a girl.”

So there it is: this Christmas, give them blocks, dolls, rockets and creative toys – and large piles of books. Then let them be. And don’t be surprised if the sparkly Barbie your daughter now dotes on ends up decapitated in the backyard.