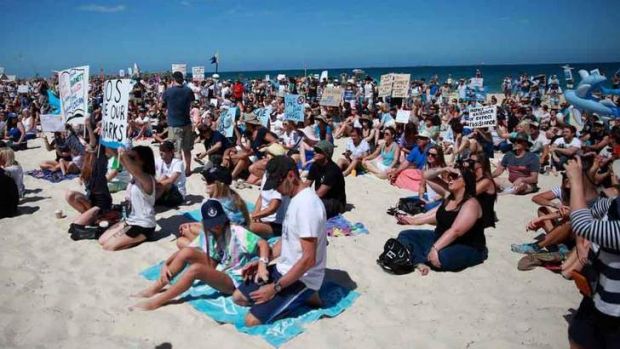 The signs suddenly appeared one morning at Manly Beach, taped to poles. ”Healthy oceans need sharks”, they read, with the hashtag #NOWAOceancull. Lithe joggers, cheerful swimmers, yawning parents juggling strollers and dogs stopped to read them, advertising a rally to be held at 11am Saturday morning.

As with many grassroots campaigns, an unlikely group of people have coalesced to fight for one of our most brutal predators over the past few days, since the West Australian government began to cull sharks.

In my ocean swim group – winningly called the Bold and the Beautiful – hundreds of people in pink caps cross shark-inhabited waters each day at 7am, arcing from South Manly Beach, across the protected Cabbage Tree Bay to Shelly Beach. The sharks are mostly dusky whalers, and they are sighted frequently, giving swimmers nothing but massive adrenalin bursts. When bluebottles strand the bay in large numbers, we often go to the harbour side to swim, where bull sharks quietly glide past ferries, penguins and unsuspecting tourists. Sometimes great whites are spotted further out, when the more adventurous swim around two or three headlands; it is only then swims are abandoned.

On Thursday morning, a large crowd of pink caps posed for photos on the beach alongside a local activist dressed in a shark costume. You’d think this mob might have the most to fear from hungry sharks. But those who know the ocean best respect them the most.

It’s not just Manly locals who are protesting the decision to trap and kill sharks with 72 drum lines (one has already been killed). Rallies are planned across the country on Saturday, including Cottesloe, Broome, Perth, The Entrance, Kingscliff, Burleigh Heads, Melbourne, Glenelg, Adelaide, Hobart and even the Australian High Commission in Wellington, New Zealand.

These are not fringe groups. A recent poll by UMR Research found the vast bulk of Australians do not fear sharks, and don’t want them killed on our behalf: 83 per cent have not changed the way we swim or play in the water, and 82 per cent believe we swim at our own risk. Nets seem to be the most favoured alternative for controlling sharks: three in five support them at ”some beaches”.

Only 15 per cent believe sharks should be hunted, killed and culled.

So why is this happening? WA Premier Colin Barnett currently struggling in the polls, is in a predicament. Seven people have been killed in three years. Many people are afraid, and want something done. He hopes culling sharks will saves lives. The problem is, there is no evidence to suggest culling would reduce attacks. Why do we continue to deride, dismiss and ignore science?

No one wants to be eaten by a shark. Since 1791, 217 people have died in Australia from shark attacks (about a third of all shark attacks have been fatal). On average, one person dies a year from shark attacks – extraordinary, given how many of us flock to the water’s edge, reefs and depths.

But sharks – especially great whites – provoke a primaeval horror. They are pure muscle and teeth: enormous, primitive, powerful beasts whose habitats we occasionally trespass in. (As Ricky Gervais tweeted: ”You can kill any shark that gets out of the sea and starts killing us in our natural habitat of streets and pubs and internet cafes. Deal?”)

In the only other systemic cull that has occurred, which was between 1959 and 1976 in Hawaii, 4668 sharks were shot, at a cost of $300,000 – but the number of people bitten stayed the same. The Hawaii Institute for Marine Biology has repeatedly said it was an ineffective or at best neutral policy.

And shark populations globally are shrinking, thanks to overfishing and an appetite for shark fin soup. Culling a species threatened with extinction is like stomping on cockroaches after you’ve chemically bombed your house. One hundred million sharks are already being killed each year, somewhere between 6.5 and 8 per cent of the population. They live long, grow slowly and are delayed breeders, so they are slow to replace themselves or adjust to change.

Shark experts are united in their opposition to the cull. Professor Shaun Collin and Ryan Kempster from the University of WA’s Oceans Institute wrote on The Conversation: ”So often the argument in favour of a cull comes down to the emotional question of who is more important: a human or a shark. Rather, we need to ask the question: will culling sharks actually reduce the risk of an attack?”

What we need is research that would enable us to better understand sharks: why and when they bite, and what prompts them to swim closer to shore. The WA government is also funding research into the cues – vibrations, visual cues, electrical signs – that provoke sharks to attack. Various companies are creating deterrent devices to fit around ankles and into surfboards, and designing wetsuits that might confuse sharks.

One rather novel and clever idea is getting sharks onto Twitter. Sounds nuts – but imagine if you could receive an alert when sharks swam close to shore. Granted, you are not likely to be browsing Twitter while catching waves, but it’s an interesting idea. Already, 320 sharks in WA have had transmitters attached to them that automatically send tweets detailing size, type and location when they move close to shore. (Check out the Twitter page of Surf Life Saving Western Australia.)

The policy most effective in controlling sharks to date has been found in Brazil, where they are caught then released further off shore, away from populated areas. Before release, they are measured and tagged. This avoids the collateral damage of killing oceanic beasts, which can crack the food chain, and result in species dying.

Facts, reason, evidence. It should not take dawn photo shoots with people in fluffy shark suits to convince us to listen to science.