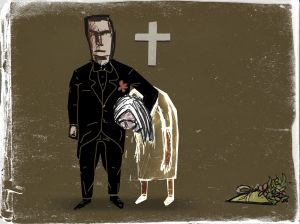 “I think of you from the moment I open my eyes until I lay my head back down on my pillow,” wrote Rosie Batty in a letter to her son on the anniversary of his death. “The house is quiet, something is missing. It’s you.” And every heart cracks, reading it.

A short time ago the subject of domestic violence was barely discussed in this country: it was shameful, something buried or made light of. But the recent shift in understanding – much of which has been driven by women online – has been remarkable.

We are all talking about it, urgently. The widely admired Batty is Australian of the Year, Quentin Bryce is chairing a taskforce in Queensland, and Victoria is holding a royal commission. We are now beginning to wrestle with how to tackle some of the attitudinal cross-beams of a culture in which one woman is killed by a current or former partner every week. One-third of women experienced physical violence after the age of 15.

But there is one area that has been largely ignored: what is the role of the church in all of this? More specifically, if conservative churches preach the dominance of men, and submission of women, does this add weight to those who think men have a right – even a divine right – to control their partners?

A growing number of Australian theologians are expressing deep concern about the consequences of what is known as the doctrine of headship.

According to this doctrine, a man is the head of a woman, and wives are to submit to their husbands. The verses usually drawn on are from Ephesians 5: “Wives, be subject to your husbands as you are to the Lord. For the husband is the head of the wife just as Christ is the head of the church, the body of which he is the Saviour. Just as the church is subject to Christ, so also wives ought to be, in everything, to their husbands.” (Too often skipped is the verse that precedes it: “Submit to one another out of reverence for Christ.”)

A group called Progressive Christians Australia has published a statement backed by a significant group of theologians who argue headship has been powerfully destructive in convincing men they have power and control over women, and women that they must suffer in silence. It is not just an abstract debate.

Reverend Peter Catt, the Dean of Brisbane, says: “I have heard pastors and others tell people in domestic violence situations that they have to stay in situations of abuse because they are under the headship of the male. And that if they leave they are committing a sin.”

Horrific, right? It is extremely disturbing given a 2005 ABS survey found that 81 per cent of women who had experienced sexual assault did not report it to the police. But Catt says it is a “startlingly common occurrence”.

In counselling sessions, he said: “I have sat with males, whose spouses left because their husbands tried to choke them, argue that they married for better or worse, and that this is just worse. ‘She is mine,’ they say, ‘I own her’.” It is an extension, argues Catt, of a culture where even at secular weddings, the question is asked: “Who gives this woman to be married to this man?”

Reverend Margaret Mayman from Pitt Street Uniting Church tells a similar tale. In her 30 years of pastoral ministry, she says she has seen a “significant number” of women who have been counselled by ministers to stay in violent relationships. Mayman, who has a PhD in Christian ethics from New York’s Union Theological Seminary, argues: “If submission is the theory, then battering is the practice.” She tries to show those women parts of the Bible where it shows God wants relationships that are “respectful, empowering and life giving rather than dominating”.

After all, those who misinterpret those texts are misinterpreting Christianity. A director of the Public Centre for Christianity, Simon Smart, says: in the Bible, headship “is less about deciding who is boss and more about exhibiting a kind of love that reflects the character of Christ. That love therefore is supposed to be about sacrifice and service such that the other person is lifted up and enabled to flourish.” But what if it is open to abuse, and wielded and understood wrongly? Why so much focus on male power?

“I have heard pastors tell people they have to stay in situations of abuse.” – Peter Catt, Dean of Brisbane

Reverend Glenn Davies, the Archbishop of Sydney Anglican diocese, which is known for its emphasis on headship, argues it must be understood in context. The role of the man, he says, is not to control, but to be a “servant leader”.

He explained: “A knife is a very useful tool – if used properly. In the wrong hands it is a weapon. But headship is not domination, it is God’s plan for our lives. Headship is a medal of honour, a medal of service and for a wife with a good husband it’s a privilege to serve him.”

The statistics on domestic violence are “horrific”, he says, and if a woman’s life is in danger she should leave, even though that would mean “disobeying her husband”. But what if that also means disobeying your minister?

To most modern thinkers, the emphasis on obedience or headship is bizarre, retrograde and entirely unnecessary when the core message of the Bible is love, selflessness and service, not a drive for power. But when it is abused it also becomes dangerous. It really is astonishing, and appalling, to think in some places the church could not be fighting, but condoning violence.