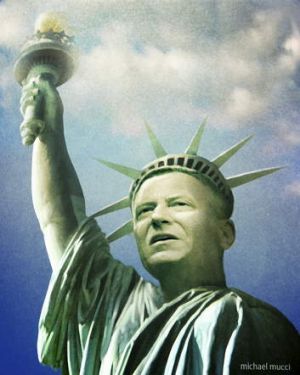 Today, the gulf between poor and rich has grown so broad again that economists claim we are now in the Second Gilded Age, when, even after the recession, high earners are continuing to increase their share of wealth as more people slip into poverty.

And this fact has just struck New Yorkers. Hard.

At the same time, across town in Park Slope, Brooklyn, Bill de Blasio was waiting to be sworn in as the 109th mayor of New York. He took his oath at midnight as a million people watched the ball fall in Times Square, faces lit by acres of billboard-neon. In the quieter streets of Park Slope, in front of a ”tiny, handpicked” crowd, de Blasio, the first Democratic mayor of New York since 1993, promised to make ”a change we all needed”.

The new mayor woke to a headline in The New York Times that read: ”De Blasio Draws All Liberal Eyes to New York City: Lab for Populist Ideas.”

De Blasio’s term has coincided with a remarkable turning point in America’s political debate. In a nation with a rapidly shrinking middle class, politicians are suddenly debating inequality and disadvantage. And New York will be the litmus test for what can be done. De Blasio, a former city councillor from Brooklyn, who came from behind in the mayoral race to win 70 per cent of the vote, campaigned on the Dickensian notion of a ”tale of two cities”. Which proved to be the perfect message.

Wall Street billionaire businessman Michael Bloomberg was a respected mayor, who drew deeply from his own pockets to aid his city and oil his administration. During his 12 years in office, there was a dramatic drop in crime and substantial investment in construction, as well as a reshaping of the waterfront and improvements in schools. He banned smoking, poured money into parks and presided over a steady expansion of the economy. As The New Yorker put it, Bloomberg’s legacy may be benevolent ”plutocracy and populism”.

Feelings soured after 2009, though, when he vastly outspent his opponents in the mayoral race and overreached by extending the number of terms a person could serve as mayor to three instead of two.

But what was increasingly obvious was that Wall Street had survived the recession it had largely caused, while much of the rest of the city was suffering. (In 2012, the income share of the top 1 per cent in America climbed to above 20 per cent, which is what it had been before the Great Depression.)

While Bloomberg was dreaming of importing billionaires from Russia, rents soared and transit cards went up in price. An overly aggressive use of ”stop and frisk” policies also angered minorities, whose fears were confirmed when a federal judge declared ”stop and frisk” to be racially discriminatory.

Since 2001, when Bloomberg was sworn in, the number of homeless in New York has risen by 69 per cent, according to the US Department of Housing and Urban Development. Much of this has been recent: when the recession struck in 2008, 37,000 were without homes – now 64,000 are. An estimated 52,000 are in shelters each evening, and 22,000 are children. This bucks a national trend – as The Guardian pointed out, last year, the number of homeless people dropped nationally by 4 per cent, but rose in New York by 11 per cent.

A tale of two cities indeed.

On Wednesday, in his inaugural speech, de Blasio stated: ”When I said we would take dead aim at the tale of two cities, I meant it. And we will do it. That mission – our march towards a fairer, more just, more progressive place, our march to keep the promise of New York alive for the next generation – it begins today.”

How far will this march go? De Blasio’s agenda – not yet approved by the legislature – includes raising taxes for those earning more than half a million dollars a year, and funnelling those funds to universal, full day pre-kindergarten, and after-school programs for middle school, as well as expansion of sick leave for people working in small businesses.

”We do not ask more of the wealthy to punish success,” he said. ”We do it to create more success stories.”

Now liberals across America are egging on de Blasio while trying not to burden him with the same stellar expectations they had for Barack Obama. Obama was too pragmatic and hamstrung to deliver the shining utopia his soaring oratory seemed to promise, evident in the timidity of his reforms in healthcare and financial regulation.

Already, supporters are warning that de Blasio may not be able to deliver all he promised. But he will be buoyed by a national push to address inequality: Democrats have decided to campaign this year on increasing the minimum wage to capitalise on the growing populism and show a commitment to rebuilding the middle class.

”Big dreams are not a luxury reserved for a privileged few,” de Blasio said. And if there’s a city that knows big dreams, it’s New York.