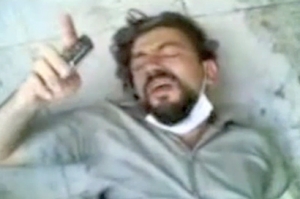 It’s been a year since Neda Agha Soltan died. Since her dark eyes blazed into the camera of an on-looker while she lay on the ground, muttering, “I’m burning, I’m burning.” The powerful, gruesome video of the young musician, taken after she was shot during the Iranian election protests on June 20 last year, was touted as the most widely watched death in history. It’s a grim honor, yet this footage—along with many others of the protests, shot by shaking hands and blurred by chaos, running feet, and shouting voices—marked the moment citizen journalism truly entered the mainstream.

And it may have been at this moment that, as millions watched an autocratic regime violently repress dissent, we understood the Internet to be not just a source of information, fun, and power, but a basic right—a right that is crucial to democracy, diplomacy, and open government. A year on, though, we are at real risk of backsliding: people have been jailed in Iran, and elsewhere, for questioning and exposing governments online. Firewalls have been erected; servers have been shut down; online access has been denied. Here, we remain vigilant about fraud and privacy, and rightly harangue Facebook when its wizards compromise our secrecy for commercial ends. But as we veer into debates about the ability of employers to see photos of us dancing on bars, this greater concern—censorship of political dissent online—is getting far less airplay. It is not just happening in China and Iran, but also in Burma, Syria, Tunisia, Uzbekistan, Turkmenistan, Cuba, Saudi Arabia, Moldova, the United Arab Emirates, and Bahrain.

A GlobeScan poll of 28,000 people conducted for the BBC in March found 87 percent of those who use the Net believe it should be a “fundamental right.” This is a serious and profound shift in our understanding of rights. One in seven of those who do not use the Internet think they should have the right to if they want. Yet only half of those surveyed felt the Internet was a safe place to express their opinions, and more than half thought that it should never be regulated by the government. Which may suggest that some people are willing to accept some compromises to privacy to avoid the creeping censorship that too easily follows government intervention. The basic tenet of the Internet is openness: you don’t need to forfeit all privacy, but if you want to protect it, don’t post publicly.

The debate about quitting Facebook certainly takes on a different hue when exposure, not secrecy, becomes the critical fight. In the past few weeks, both Pakistan and Bangladesh shut down Facebook in response to the group Everybody Draw Mohammed Day, because it is considered blasphemous to create images of the prophet. Facebook has been slammed by clerics in Egypt and Syria for being a gateway to adultery; and a woman was shot in Saudi Arabia after her father discovered her chatting online with a man she met on the site.

America, as a champion of free speech and democracy, should spearhead the global movement for digital freedom. Although it should be pointed out that if we are to insist, as Secretary of State Hillary Clinton has rightly done, on a foreign policy that includes recognition of “five key freedoms of the Internet age” (including freedom to connect online anywhere), then it should be part of our domestic policy also. If we can have our phones subsidized, then high-speed cable should be too: we should support FCC plans to do so.

Yet the most effective troops in this battle are not governments but the amorphous, sleepless teams of volunteer digital-freedom experts who hover, then swarm at moments of shutdown to break down firewalls, set up proxies, provide Twitter threads, stream video, house controversial content, and protect the identities of those who leak violent footage to them. “The new front line is online,” says Brett Solomon, cofounder of AccessNow.org, the pioneering Internet-freedom advocacy group that sprang from the Iranian protests and whose “global digital SWAT team” has enabled real change for hundreds of thousands behind firewalls. (Google and others have pledged financial assistance.) This is a brilliant way to support democratic movements.

Recently, Solomon sat at his computer instant-messaging an Iranian about his time in detention. The staccato phrases shot through like a poem: “in solitary prison/you are alone with god/and you have nothing/even a spark/even a pen/no money—no tv/no voice/and no other thing.”

In Persian, Neda means voice. Now, no matter what language you speak, the Internet means the same thing.