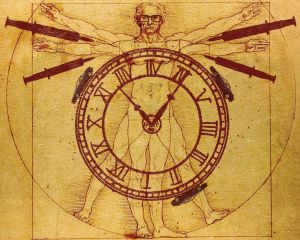 It may come as something of a surprise to discover that, by a considerable margin, Germany is the penis enlargement capital of the world. One in five of all of those delicate operations takes place in that land of bratwurst, long socks and Angela Merkel. I will leave it to you to reason why.

You can also make what you will of the fact that Australia did not even come in the top ten. It certainly doesn’t mean, for example, that our men are not vain.

The steroid black market here is flourishing, and we are among the greatest consumers of testosterone in the world.

Yes, testosterone. Across the nation, men are jabbing themselves with needles, wiping on gels, sticking on patches, or having implants inserted under their skin, in order to look better, feel younger and beat what is now being called the “manopause.”

Curiously it is Australia’s mining states – Western Australia and Queensland – that consume the most testosterone.

In the land of cliches, a decade ago, a man’s mid-life crisis meant a shiny red sports car and a pneumatic blonde. Today, it’s extreme diets, single-digit body fat, hordes of MAMILs (middle-aged men in lycra) on bicycles, gym selfies of sucked-in stomachs – and a several-billion-dollar global industry in testosterone.

So what is manopause? Some relate it to a mid-age natural decline in testosterone production – called andropause – which leads to weight gain and libido loss.

Lisa Friedman Bloch and Kathy Kirtland Silverman, the authors of Manopause, define it as: “a powerful force that hits men between the ages of 40 and 65, as declining testosterone collides head on with the cultural pressures men feel … pressures like having to ‘man up’, to be strong, powerful, even invulnerable, to hide emotion, and to always be able to perform sexually.”

Urban Dictionary defines it as: “Men in their early to mid 50s who lose their minds because they are going through ‘the change.'”

Time magazine ran a cover story on manopause this week, based on a recent University of Sydney study that found the testosterone industry globally is booming, especially among middle-aged and older men who want to increase longevity and libido, boost energy and “power, passion and performance”.

But Professor David Handelsman, the author of the study, said manopause was “a consumerist fiction invented to fleece the gullible, worried [well-off men] with more money than sense. There is presently a global epidemic of unproven and possibly unsafe testosterone prescribing – much worse in North America than here – but we seem to follow like sheep.”

Professor Handelsman’s study, published in the Medical Journal of Australia, found that between 2000 and 2011, world testosterone sales increased 12-fold from $150 million to $1.8 billion. Per capita use rose in 37 out of 41 countries surveyed – and the increase has been particularly acute in the past five years.

The problem is, testosterone is often handed out through off-label prescriptions, and used when not needed. Professor Handelsman wrote that although there is little understanding of how it worked, testosterone was subject to “surging overuse from off-label prescribing for diverse unproven indications, including use in older men as an anti-aging or sexual tonic and in younger men for bodybuilding or doping.”

Professor Handelsman found in a previous study that drops in testosterone had more to do with poor diet, obesity or smoking than ageing. One study found sesame oil injections had the same impact as testosterone injections, which suggests the placebo effect is a powerful motivating force, especially when it propels men to eat better and move more.

In many ways, these men are guinea pigs, often self-administering drugs with unknown risks. Two studies have found an increased risk of heart attacks and strokes while taking testosterone. A 2010 study had to be aborted because the older men involved were thought to be too much at risk of “adverse cardiovascular events”.

Of course it’s heretical to suggest a drop in testosterone might sometimes be a good thing. Author Jill Shaw Ruddock says an increase in estrogen in the male body means 60-year-old men might: “Start exhibiting behaviour that may start to surprise even him – calling the children every day, learning how to cook and worrying about home decorating or how the dish towels are folded and put away.”

This behaviour may be a more exciting prospect for the women of the house than the men.

I know, the exploding anti-ageing and plastic surgery industry is just madness: unchecked and booming. It is also brutally adept at exploiting exisiting insecurities, and at creating new ones.

Professor Handelsman said the excitement about manopause is “a re-emergence of the rejuvenation fantasies that recur whenever society can afford such indulgences as believing that ageing can be somehow avoided.”

It’s true. In the 1970s, feminists marched to see women valued beyond the superficial, not to see men judged by the same lame, impossible criteria of agelessness and physical perfection. Now men are joining us, in a hamster wheel of endless self-criticism and consumption our mothers tried so hard to hop off. For the most part, it’s a charmless dichotomy – you can look old, or look weird.

It’s good to be fit, strong and healthy. But there is an element of untested sorcery here. Can men really make middle age disappear, by injecting and tweaking and exercising it into oblivion? Do we really want to spend years racing our own limitations until suddenly we are old, or keel over from the exertion? It’s a shame we associate middle age with crisis, not comfort, or with a plinth instead of a prime.