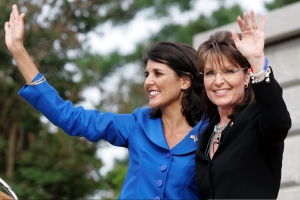 The Power of the Palin Endorsement. Mary Ann Chastain / AP

Something pretty creepy has been happening to conservative women lately. There seems to be an insistent, increasingly excitable focus on the supposed hotness of Republican women in the public eye, like Sarah Palin, Michele Bachmann, Michelle Malkin, and Nikki Haley—not to mention veterans like Ann Coulter. The sexual references are pervasive: they come from left, right, and center, and range from gushing to highly offensive. Harper’s* asked, “Is Sarah Palin Porn?” as others quizzed the former governor about whether she had breast implants. Right Wing News compiled a list of the hottest conservative women in new media. Playboy even ran an outrageous piece titled “Ten Conservative Women I’d Like to Hate F–k,” which read like a sick attempt to make rape cool. “We may despise everything these women represent,” wrote the author, “but goddammit they’re hot. Let the healing begin.” Moron.

It’s odd to see how some men insist that when women start to grasp power, we should think of them primarily as playthings and provocateurs. Is this the best way to explain their success? They aren’t challenging the status quo. They’re being wild! They’re not trying to lift the ban on offshore drilling. They’re being naughty! When four women beat a field of men on the same night recently, competing for primary and gubernatorial nominations, it was widely referred to as “ladies’ night.” Aren’t ladies’ nights those promotions where women are allowed free entry into bars to provide fodder for the men?

Women in politics are used to being trivialized, and have tended to dress and behave soberly in response. The wisdom has long been that discussions about their sexuality are not just distracting and degrading, but also destructive.

Which is why what happened to Nikki Haley during the campaign for Republican candidate for governor of South Carolina was so fascinating, and counterintuitive. She entered the contest as a little-known businesswoman. She was endorsed by Jenny Sanford—the former wife of Mark Sanford, he of the Appalachian Trail. When she was anointed by Palin, Haley shot up in the polls. Then, on the cusp of the vote, two men—one of whom worked for a rival—suddenly declared they had had “inappropriate physical” relationships with her.

Astonishingly, Haley’s -popularity surged and she won. Perhaps it is because she is the very model of a modern Republican: she defies stereotypes. She is Indian-American, a Christian with Sikh heritage, and a woman in her 30s with two kids. She vehemently denied suggestions of infidelity, insisting the boys of the establishment were trying to destroy her. Palin—who so cleverly harnesses anti–incumbent, anti-boys’ club sentiment—bounced to her defense, crying, “South Carolina: don’t let some blogger make any accusation against your Nikki if the guy doesn’t even have the guts or the integrity to speak further on such a significant claim.” Suddenly, people knew Haley’s name, and watched as her alleged lovers were dismissed as gay, politically motivated, or deranged when they were unable to produce any evidence.

Haley may also have benefited greatly from being able to appear as the victim of malicious, politically motivated men. Perhaps she caught a growing wave of discomfort about the crass ogling of female politicians that we’ve been seeing. It’s not the most edifying of debates to have about a serious political candidate, who, more importantly, says she is a fiscal conservative who would have opposed the stimulus package. This is why it was gratifying to see three other women score political wins on the night Haley polled 49 percent out of a field of four (more than double her nearest rival).

But all of the excitement about these wins, the supposed rise of the “mama grizzlies” of the right, has obscured where things really are with women in politics. One in six members of Congress is female; out of a total of 535 seats, Republican women hold only 21, or 4 percent. It’s hardly an onslaught.

The number of women holding state-wide executive office has dropped since 2002, from 88 to 72 of the 315 positions. There are only six women governors. So no matter how striking the incremental gains, we’ve got a long way to go before approaching anything resembling equality. Which is why we need to remember that these women are not competing to see who has the most smokin’ bod. They want to run the country, or their part of it. They want votes, not free drinks—and we need properly scrutinized candidates, not circus performers.