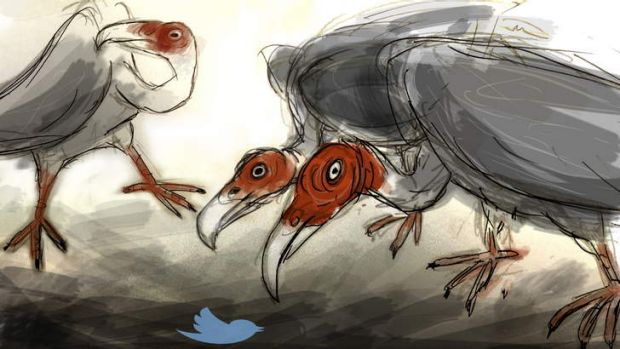 Van Badham is the kind of woman who could lay claim to the title virago: a strong-minded, bold, funny writer who penned her first play when she was in second grade. When not crafting novels and columns, she frequently fences on Twitter, often arguing about politics and gender. Over the eight months her father spent slowly dying of cancer, she shared details of his illness – because he was so intrinsic to her life, she says, that most who knew her knew him: “He was my best friend, I was an only child, we even look alike.”

John “Baddoh” Badham died in his daughter’s arms in Calvary Hospital in Sydney.

On the day of his funeral Badham woke feeling “broken, lost and ineffably sad”. “He was my navigator and now he was gone.”

She turned on her phone and checked Twitter. A torrent of filthy messages fired at her, with pornographic images attached: “This is what your father thinks of you.” “Your father died of shame.” An ugly, familiar phrase. It does not get much lower. Or sicker.

Trolling is a particular kind of evil: the rationale is inconsistent, the victim often random, the motives unfathomable to any decent person. But the vast majority of the targets for obscene, violent abuse are female.

The evidence is rapidly accumulating: teenage girls are three times more likely to be targeted than teenage boys. Three out of four who report being harassed and stalked online are women. And, according to Pew Research Centre, 5 per cent of women online said they had been put in a position of “physical danger” because of an internet activity.

Many women have lengthy stories of battles with trolls, involving police reports, intervention orders, court appearances and much time wasted. Women who write about women seem to cop it the most. Scratch the online worlds of most of Australia’s most outspoken women – like Catherine Deveny, Mia Freedman, Anne Summers, Tara Moss and Clementine Ford – and you will find armies of trolls spitting and frothing, pulling hair and hatching threats.

Those women who write about sex attract a particular kind of obscenity. So do young women. After a spate of feral personal attacks, 20 female editors and writers of Mamamia.com published an open letter to anonymous abusers this week in which they declared a refusal to be silenced.

They wrote: “Many women who speak their minds are subject to the most vile abuse. Many of us receive death threats and rape threats. Many of us are abused online in the most vile, aggressive and putrid way. This is not new but it’s getting worse … We won’t call it trolling because that makes it sound somehow harmless, like an ogre in a fairytale with goats in it. This is abuse and its sole intent is to silence the women at whom it is so ferociously hurled.”

Mia Freedman says they went public because: “I’ve seen so many amazing, articulate, intelligent women silence and censor themselves because it’s just too debilitating and distressing to experience this kind of abuse.”

So how do we deal with it? The sensible wisdom is to ignore trolls, and walk past blithely whistling, if possible. I have three more suggestions: first, employers should tighten and clarify Twitter protocols so staff know sending anonymous, obscene, threatening or violent messages would result in strong disciplining, or even sacking. UTS journalism lecturer Jenna Price uses this tactic: tracking down trolls and calling their workplace. Usually the behaviour stops, and grovelling apologies are sent.

Second, lobby Twitter to improve its complaints process – it can take up to a month to respond to reports, which is ridiculous. Form responses are often sent, reasoning is vague, and blocking is ineffective.

Third, employ humour. Author Jane Caro says: “I once replied to someone who said he would come over and kill me soon by saying, ‘lovely, I’ll pop the kettle on.’ I never heard from him again … my advice is mock, don’t huff & puff. Most of them are probably 15-year-old boys or 60-year-old virgins.”

Deveny and Badham are currently appearing in a comedy show called The Trollhunter, drawing on a bounty of real material. Caro welcomes the exposure of trolling: “The fact that men of goodwill are seeing this foul vitriol in the open via social media is an entirely good thing.” When sexualised bullying was behind closed doors, she says, “if women complained about it they were disbelieved and thought to be exaggerating. Now everyone can see how horrid and weird it is.”

It’s not just women in the public eye who are abused. Jane Cattermole, a mother of two and a women’s health worker from Perth, has been repeatedly trolled in repellent ways because she included her first child, who was stillborn, on her Twitter bio. One wrote: “Hey shouldn’t you be stroking your stillbirth in the jar on the mantelpiece?” Another taunted: ”Your stillborn probably died of shame because of its mother.” (That phrase – again!)

“People often tell me to just block these people, and I do,” Cattermole says. “But what people don’t understand is the effect it can have on a person who’s experienced trauma. Because the stillborn I refer to was 40 weeks old, and prior to that comment I had never had an image of him in a jar on a mantlepiece, and now I do. And every time it’s mentioned or mocked by these people, it’s the first image that springs to mind no matter how hard I try to shake it.”

Surely much of this could be solved if Twitter insisted people use their real names, as Facebook tries to do. Why allow the violent and cowardly to hide?

A growing body of American legal opinion sees anonymous abuse as discrimination against women in online employment that must be seriously addressed, writer Amanda Hess pointed out recently in an excellent article in the Pacific Standard. It can push women out of cyberspace, shut down debate, cause great distress and waste a lot of time and money in usually futile appeals to a legal world that does not yet fully understand the problem.

Cyber-assault is the new frontier of violent abuse of women.

It is not imagined. We cannot just shrug it off.