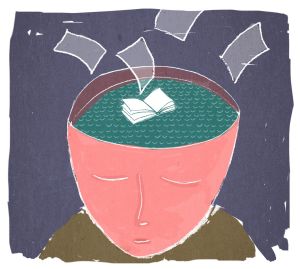 When Maya Angelou was three, she decided she had a Big Mind as well as a Little Mind: “And the Big Mind would allow you to consider deep thoughts, but the Little Mind would occupy you, so you could not be distracted.” So when the American poet went to work in the hotel room she hired to write in, she would bring a pack of cards and crossword puzzles.

Her Little Mind would struggle with crosswords, she said, while the Big Mind “would delve into the subjects I wanted to write about.” Simplistic concept, granted, but Angelou’s childish idea of the Big Mind mirrors what legions of creative people talk about. In order to think, you need to clear distractions and create a space in which your brain can roam.

And, if working on a prolonged project that requires particular concentration, it needs to be a space in which your mind can truly slow, and sink into another realm. What Claire Tomalin described as “sinking into the mud” when she closed her study door to write about the grubby 19th-century world of Charles Dickens.

This kind of solitude is hard fought-for and, in our blinking, bright-lit technological age, easily squandered.

Attention is getting harder to maintain for any decent stretch. According to the National Centre for Biotechnology Information, the average attention span in 2000 was 12 seconds. In 2013 it was eight. Officially less than that of a goldfish, which is nine seconds. The average number of times an office worker checks their email is 30. And Susan Sontag only responded to letters once a week!

With all the talk of mindfulness and meditation today, we rarely discuss the importance of immersion. Not of detachment, or an intense focus on your physical environment, but an intense mental focus on something else. And yet very few workplaces genuinely grapple with how to create these conditions. And what if the goal is not hyper-productivity or speed, but excellence?

There comes a moment, sometimes, when you are writing or working on something you love, when you are entirely engrossed: clocks pause and your fingers move as though in a dream. Immersion is so rare and gratifying that you can begin to crave it once you taste it. Albert Einstein used to like sitting in his Princeton office and staring at the walls, just thinking.

Writers can live an extreme version of this, when books stretch over years. Author Haruki Murakami wakes at 4am every day and writes for six hours before running for 10 kilometres. “I mesmerise myself to reach a deeper state of mind,” he says.

Towards the end of every book William Gibson writes, he gets into a place that feels like “a complex, chemically altered state that will go away if I don’t continue to give it what it needs. What it needs is simply to write all the time. Downtime other than simply sleeping becomes problematic.”

This is a place I call The Zone. It involves living what Kurt Vonnegut called an “unmoored life”, where basic functions like eating and sleeping “arrange themselves to suit themselves”. (He rose at 5.30am, worked until 10am then did errands and swam laps. At night he numbed his “twanging intellect with several belts of Scotch and water” and listened to jazz.) Towards the end of writing each book, Joan Didion needed to sleep in the same room with it.

It has always struck me as odd that, when you write a book, the only question you are asked repetitively is: “When will you finish?”, not “What is it like?”, or, “What have you found?”

Why have we become obsessed with speed? How often do you read something that could have done with more time?

Jane Austen spent almost 17 years writing Pride and Prejudice. Gone With the Wind was published a decade after Margaret Mitchell started to write it. Leon Edel took 20 years to write the story of Henry James. He won a Pulitzer. J.K. Rowling spent seven years producing her first Harry Potter book, though being a single mother with little funds would not have expedited that process. Victor Hugo spent 17 years on Les Miserables.

That colossus of biography, Robert Caro, published the first volume of his brilliant biography of Lyndon Johnson in 1982. He is still writing the fifth. He expected his first epic biography, of New York urban planner Robert Moses, to take nine months, but it took several years. His long-suffering wife sold the family home to support it, but it won him his first Pulitzer.

I have listed rare books. Not all long projects turn out well. But much of our modern media shows that simmering is under-rated, and too rarely practised, and often work is poorer for it. There must be something in what Milan Kundera called “the wisdom of slowness” – and a deep, long span span of attention.

In a world of tweets and hares and a race to be the first, let’s pause to think of the snails and tortoises who take time. Maybe some people just need time. Maybe some just want it. Maybe the immersion is just as delicious as it is torturous. But percolation can be a fine thing if we let it happen.