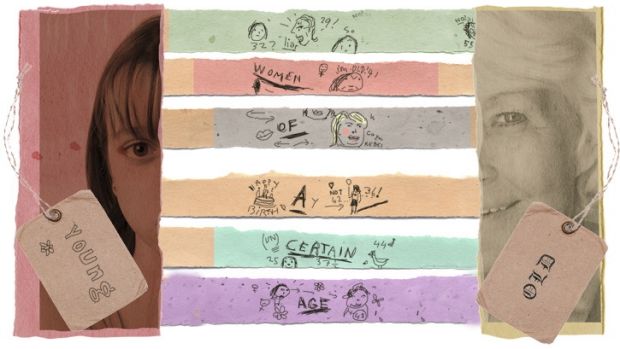 I lied about my age once, to Facebook, when I told them I was born in 1931. Then I promptly forgot I had done so, and was quite deflated by the number of “Seniors Dating” and “Pensioner Romance Cruises” advertisements running alongside my page, with attendant shots of grinning silver haired men.

But the hoo-ha over the fact that Australian actress Rebel Wilson appears to be 35, not 29 as previously claimed, has highlighted, again, how absurdly ageist the media and entertainment industry is. It’s not vanity, it’s security. Women who work anywhere near that industry are all too aware that they may lose jobs simply because of biological age and despite competence. Who cares how old Rebel is? The fact that backroom producers probably do has made me wonder: what is the age at which women want to stop ageing? In other words, what is “a certain age”? What does that patronising phrase even mean?

The Free Dictionary says “a certain age” is a phrase “used to avoid saying that a person, usually a woman, is no longer young but is not yet old”. But where is that certain place? Equally unhelpfully, the Collins English Dictionary says: “of an unspecified age, but no longer young (usually said of women)”. So we can pretty much rule men out at this point.

Urban Dictionary has a far more specific term: “Ironically polite term for a woman who does not want her actual age known, e.g. one who is close to or just over the menopause.” Oh, so it’s the menopause! How do you work out when a woman hits that rather private lady-lacuna? The Urban Dictionary gives more clues as how to spot one of these indeterminate creatures. “Things which define women of a certain age are,” they explain, “exceptionally gaudy clothing, homeopathy and aromatherapy, sensible haircuts, books on feminism, affairs with paper boys, and coffee mornings.” Oh. So you might be hormonally variable, but you will be well-groomed, well-scented, well-read, rebellious, calm, colourfully clad and sexually sated. Things are starting to look up!

But I’m still confused. The New York Times tried to help out on this delicate question in 1995 when the redoubtable William Safire flagged a trend – the age of “an uncertain age” was creeping upwards.

He helpfully traced the origin of the phrase in English to Connoisseur magazine in 1754: “I could not help wishing,” wrote an essayist, “that some middle term was invented between Miss and Mrs to be adopted, at a certain age, by all females not inclined to matrimony.” This was of course centuries before Ms was brought into usage.

He also discovered that the distinctly odd poet Byron referred to such women – usually thought to be spinsters – in 1817: “She was not old, nor young, nor at the years/Which certain people call a certain age,/Which yet the most uncertain age appears.” But in 1822, he nastily called women of “a certain age”, “certainly aged.” Ouch, Lord B.

Some blame England for this mad stereotype. Lillian B. Rubin, psychotherapist and author of a book called Women of a Certain Age: The Midlife Search for Self (1979) told Safire that in France a “certain age” is an important and particularly erotic time: “it has a long history in French, where it refers to women of 40ish and thereabouts who are able to initiate boys and young men into the beauties of sexual encounters. The early use in English seems to be about spinsterhood, but the French meaning has nothing to do with marriage.” Both men and women in France are referred to as being “of an age”. (What can go wrong in a culture where one phrase for having sex is “Faire un partie des jambes en l’air’? Meaning, to have a party with legs in the air?) Safire concluded that the “certain age” had shifted from the late 30s to the 50s. But oddly we still often view women over 30 in terms of husbands or hormones, not horizons. We should think of age not as a contraction of opportunities, but an expansion of possibilities. And women not as craven cougars, but assertive, comfortable, ripe, who do not seek approval.

It is daft to think of women in their prime – a substantial bracket of age, which can stretch as long as 30 years – to be both blooming personally and professionally and shying from owning their age. Many Hollywood actresses are rightly angry about the dictates of marketability, the stupidity of the gendered shelf life and the relentlessness of the photographic onslaught. We should join in their laments about ageism, because we don’t want women in their prime wiped off our screens, or altered beyond recognition.

Nor do we need magazine spreads about being fabulous at any age or awkward grey power slogans, or whatever inane self-affirmations older women are encouraged to chant in order to walk in public both wrinkled and unmasked. We just need to rethink what it means to be a certain age. A certain wisdom, a certain comfort, a certain sexuality, a certain something. Growing more certain, not less. Either that or we’re all moving to France.