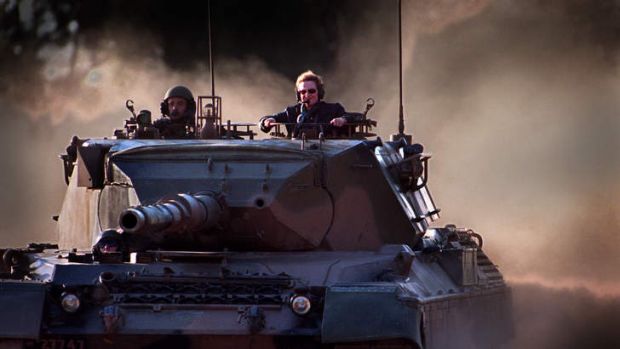 As minister for defence industry, Bronwyn Bishop leads the charge in a Leopard Tank at Puckapunyal Army Base during a visit in 1997. Photo: Simon O'Dwyer

In the 1990s, Bronwyn Bishop was so ubiquitous that the press gallery wore masks of her face in their 1994 group photo. Cartoonist Alan Moir drew her as a crowd of clones, grinning menacingly, and Mardi Gras devoted a float to her. Fairfax photographer Mike Bowers called it ”Bronnymania”.

She was the Sophie Mirabella of the 1990s – the politician journalists loved to hate – but bigger, bolder and more nakedly ambitious. She was called Piranha, Barracuda, a hot pink steamroller, Battle Axe, Boadicea, Ice Queen, Marge Simpson, Senator Bobbitt, and Attila the Hen. Commentator Mike Gibson said she was so tough, ”she blow-dries her hair in the exhaust of her limo”.

Bishop sucked up the satire like gruel: when Paul Lyneham said she was a cross between Margaret Thatcher, Edna Everage and a Sherman tank, she placed a model of a tank on her desk along with gladioli, and a photo of her smiling alongside Britain’s first female PM.

For that is what Bishop wanted to be: prime minister. Not speaker.

And, briefly, voters did too: a 1994 Newspoll found 39 per cent of voters wanted her to be leader, while 21 per cent favoured John Hewson and 13 per cent John Howard.

The announcement that Tony Abbott would be backing Bishop for the role of speaker this week was heralded as a coup for women. There may have been, stupefyingly and embarrassingly, only one woman in cabinet, but we were told Bishop would be lending lady-like decorum to the house.

However, this potential appointment is not a symbol of female achievement, but the thwarted ambition of Liberal women. Just a few months ago Bishop told Peter van Onselen she was not interested in being speaker as she wanted a place at the cabinet table, with the seniors portfolio. Bishop leans in so hard she makes the Tower of Pisa look vertical.

This week of course, she sat next to Mr Abbott, beaming delightedly and talking of bringing back dignity to Parliament. I am sure she can do this, but it was never her goal. Real power was her goal. So when exactly will the federal Liberal Party bring women back to cabinet? And what on earth went wrong? It’s not hard to find women to promote – the smart, long-serving Marise Payne would be an obvious, easy choice of cabinet member, but is in the outer ministry. Kelly O’Dwyer is another. A meritocracy without a decent number of women is a perversion.

The crucial period for understanding the slow collapse of Liberal efforts to draw more women into the fold is the mid-1990s. And the crucial figure is businesswoman Chris McDiven, who went on to be the first female president of the Liberal Party in 2005. McDiven was president of the NSW Liberal Women’s Forum from 1991 to 1996, and flexed considerable muscle, very effectively, getting women preselected, with the backing of then state director of the Liberal Party Barry O’Farrell (who has six women in his cabinet). McDiven expanded her efforts nationally when she became the president of the federal women’s committee from 1994 to 1997 – again, with critical support from Hewson.

She says the key was: ”The party supported the women’s initiative to train, support and mentor women seeking preselection.” And lo! A record number of Liberal women were elected in 1996.

McDiven had mentored every one of them. But when she stepped down, momentum was slowly lost. Women who were then in Parliament now talk – only off the record – of a fading interest in equality, an insistence that women suffered no disadvantage, and a disdain for those who urged the promotion of women. Much of this has to do with the gradual, firm shift of the party to the right, as well as a vacuum of leadership.

Former senator Judith Troeth says, simply, Liberals have ”dropped the ball on promoting the sensible idea of having strong women candidates”. This happened, she says, because of cultural pressure: ”The necessity of having a relevant number of women in the party to show our cultural diversity has lost importance because the leadership has not come from the top.”

Bishop wanted to be prime minister. Not the speaker.

Over the past decade, there has been a subterranean cultural fight over gender within the party that is rarely spoken of, and only ever with microphones off, through gritted teeth.

When I interviewed Bishop for my book Media Tarts 10 years ago, she said men had a vested interest in keeping women out of cabinet: ”If women are able to compete equally, what you do for men is, you double your competition … If you look at our frontbench, most of the blokes have stay-at-home wives. Now, I’m not criticising that situation, but it doesn’t reflect what the rest of the country’s like. And it does have an impact on policy.”

The rub is this: it’s not that hard to find women of quality to run for Parliament, and amply occupy the senior jobs. They exist – go find them. Having just one woman in the cabinet is offensive, alienates half the population and exposes us to global ridicule.

But what might be hard now is to convince women that politics is a worthwhile career. This week former NSW Liberal leader Kerry Chikarovski said the protracted trashing of female leaders – including herself, Cheryl Kernot and Julia Gillard – had been a strong disincentive for women to run at all.

Hewson agrees, saying the ”personal assassination” of Gillard had made women wonder if they ”want to get eaten up like that”.

”The course of women in politics has been set back a long way because the numbers are not coming through,” he said. ”And the treatment of Gillard causes people to stop and think if this is a circus they want to be part of.”

Want more women in cabinet? Do some research, tug on their sleeves, encourage them to run, and promote them for potential as well as experience. There are chief executives doing it across the land. The Liberal Party has done it in the past.

What will be hard now, though, will be to convince women that they won’t walk determinedly into Parliament and clamber through the ranks, only to somehow find themselves the star attraction of a freak show.