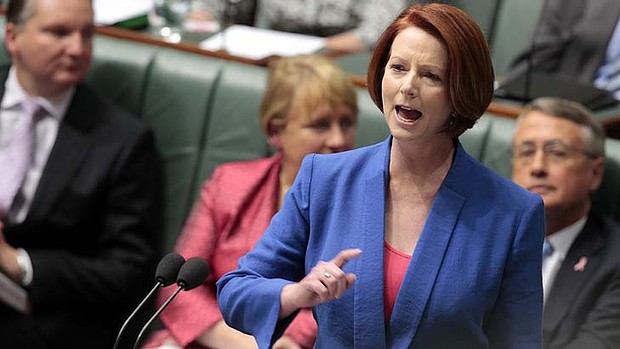 Ah, the gender card. It’s a funny old phrase isn’t it? You won’t find it in any dictionaries but we all know what it means: a trick women use to get out of detention, by vowing they are being criticised not because they performed poorly, but because their critics are sexist.

You’re just acting the victim, women have been told for decades when speaking about vile remarks, sexual approaches, or differential treatment. You should toughen up, take it on the chin, or accept it as a part of life. Or as Julia Gillard was advised repeatedly this week, turn the other cheek.

Because that’s what politicians do, right? Accept criticism silently.

What women have understood “gender card” slurs to mean is that if they call out sexism, they will be stigmatised as weak, or whingers, and their careers will be damaged. This is what female bankers, lawyers, academics and professionals everywhere learnt: cop it and move on, despite the cost.

And this is why Gillard’s speech in Parliament this week, in the middle of another grubby debate about grubby texts and a grubby court case, struck a loud chord.

For the first time in Australian political history, a senior woman from a major party stood in our Federal Parliament and attacked her opponent on the grounds of sexism in a long, blistering speech.

Agree or not, the fact that it was the first female prime minister who took the opportunity to do this made it extraordinary.

This was the real Julia: succinct, cool, visceral, combative and pissed off. Alan Jones said her father died in shame; Tony Abbott had just said her government should have died in shame. She was very angry; and beautifully controlled.

It struck a chord because she made a speech millions of women have rehearsed in their heads for years – against a colleague, boss or opponent they consider to be obnoxious or sexist – but never made. Labor women, Democrat, Republican, donkey-vote women and even some Liberal women (just quietly) gathered around their computers and yelled, air-punched and cheered.

Because Gillard said things women aren’t supposed to say, in any job, and most of all, in politics. She made a speech that politically is dangerous and may cost her electorally. (Former ALP minister John Della Bosca told the ABC on Thursday he would have told her not to give the speech because he believes it will lose votes.)

This is also why the video of the speech went viral.

Americans were fascinated because she was aggressive about things women in US politics are supposed to be ashamed of, or defensive about: being unmarried, being pro-choice, and being a woman who is pissed off about sexism. Newsweek’s Andrew Sullivan praised the speech as ”a model of a brutal take-down of a conservative political opponent”, and argued: ”Obama needs to Gillard Romney in the next debate. To his face.”

Despite this, the press gallery have been a chorus of rolling eyeballs this week, pointing out that Gillard was trying to save her skin, to maintain power in a hung parliament. Peter Slipper has been used as a political football by both sides, repetitively, and shamefully, and still is, given both still welcome his vote.

Of course he has. Hung parliaments don’t summon inner saints. Gillard is a tenacious political operator who regularly strikes compromised deals and breaks promises: surely the commentators who expressed horror that she had forever ruined her credibility by not sacking Slipper for obscene texts could not have been surprised.

It is also true the ALP is running a campaign to smear Abbott as a misogynist. Because of this, Gillard’s speech has been called fabricated, constructed and contrived. But if this was all spin and artifice, why was it clear she meant every word?

Surely the question is not Gillard’s intent, but how to weigh the evidence?

It was blindingly clear women were wary of the “gender card” for good reason: because with the exception of former Victorian premier Joan Kirner and Democrat leader Janine Haines, it had almost always backfired and was used against them.

Former Liberal frontbencher Amanda Vanstone told me the most important rule for women in politics was: “If you get typecast as a victim, you won’t survive”.

This week Gillard made no suggestion she was a victim. She suggested sexism is wrong. The “gender card” was ignored, and flipped on its head.

Having a female prime minister has unleashed some ugly demons; Gillard has been vilified in deeply unpleasant ways; but there has been a vociferous response to this, especially online. Sexism has been placed firmly on the political agenda in a new and unprecedented way.

Is it being used as another political tactic to undermine opponents? Yes, and sometimes unfairly. The difference between misogyny (hatred of women) and sexism (discriminatory attitudes towards women) is rarely noted. There is also hypocrisy on both sides, with one (high) standard on bad behaviour used for opponents, another (rather low) for colleagues. It has ever been thus. But it is delicious to think how different our parliaments would look if candidates were disqualified for holding hoary, outdated views on women.

The political debate will not shift from its usual savagery, both parties will continue to tolerate sexism in their own ranks but Gillard’s oratory may have dropped a pin on the map of political progress. Slipper’s political career is over.

What will endure is this speech, and the electrifying moment when Australia’s first female prime minister fought back against those who say women have no right to lead: hard.