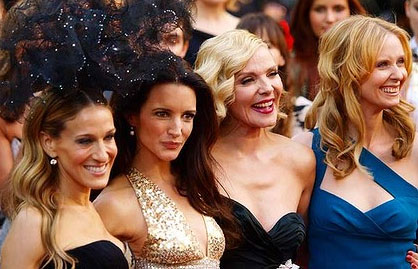 Wouldn’t it be great if there were just one character of real substance in the fading female pantheon of Sex and the City? Say, someone like Eleanor Roosevelt? (”Great minds discuss ideas; average minds discuss events; small minds discuss people.”)

I started fantasising about adding a fifth woman, one who is smart and curious, after seeing the once feisty foursome from Manhattan become rich-girl caricatures in the utterly lame Sex and the City 2, released in Australia next week. This film officially ends the era when Sex and the City was culturally relevant. The zipper is broken, the heel has snapped, the Botox has hit the brain.

I wish a character who is wise and focused on a world outside her own desires could have joined this most recent blast of bling and couture to leave long-term devotees with any message other than ageing is depressing, marriage is depressing, children are depressing, and complaining about all three relentlessly is boring.

This is why Sex and the City is still saucy, but it’s no longer subversive. Each episode of the TV show centred on four independent women, three of whom loved men but were not really interested in marriage. They spoke like us, laughed like us, dated like us, stuffed up like us, drowned their sorrows like us, and loved their female friends fiercely, like us.

They were beautiful, successful, and designer-clad, but women of all stripes and nationalities could identify with their triumphs and struggles. Alas, somehow, in this most recent shift from small screen to big, these women have become a lot less like us and a lot more like painful wealthy white women whose self-involvement has soared from amusing to nauseating.

The fantasy has frayed. Samantha, terrified of losing her sex drive, spends her money on Botox and hormone creams. Charlotte complains about her fussy second child. Miranda hates her job and leaps when her misogynist boss contacts her, breaking off a kiss with husband Steve to text him back. Carrie and Big are just dull, arguing over marital cliches like whether to have a TV in the bedroom.

In the late 1990s, when the economy was booming, and when women were delaying marriage and having kids for longer, the TV show encapsulated the anxiety and exhilaration of women who found themselves still single at an age when their mothers were waving kids off to school and having their tubes tied. The Sex and the City girls smashed a stale stigma. They were no desperate spinsters: they were bold, glamorous, and unabashed about their search for happiness, love, and excellent sex. They were dirty and defiant. They were also, importantly, mostly employed.

Yet while the TV show restored dignity to women, the latest film strips it from them. All the characters are self-obsessed and tone-deaf. Instead of defying stereotypes, they cement them. Worse, the smell of privilege has become a stench, and hints of racism emerge. In a time of prosperity, the obsession with expensive shoes was relatable. In a recession, it’s gross. While trying to persuade the girls to go to Abu Dhabi, the ”new Middle East”, Samantha groans about ”this bullshit economy” and cries, ”We need to go somewhere rich”.

And they do, gushing and gasping over the opulence of their outrageously priced, palatial hotel rooms. And so begins the cringing as we watch the anxious girls from Manhattan try to get some kicks in a country where husbands can legally beat their wives. Arabs are portrayed as angry and punitive, and Samantha, who refuses to dress appropriately, tries to fight for sexual freedom by groping men in restaurants and waving condoms at an angry crowd in a bazaar.

To be fair, the film does touch on themes that matter to women: finding your voice and speaking it, discrimination in the workforce, how to make a marriage work, and how to remain your old self when you become a mother. It just does so in a ham-fisted way. The complaints are predictable.

And just when you might start to feel the old sympathy for the characters many of us loved, they remind you they now live on a planet far away, where women bedecked in unaffordable clothes cry into cocktails and wonder how anyone who has less money than they do actually copes.

The film’s most interesting diversion is when Carrie and Big tell an unsympathetic couple at a wedding that they’ve decided not to have children. This – the only part of the film with any semblance of rebellion, freethinking, or lack of convention – is not discussed at any other point or dissected by the group, which is a shame. (The one truly shining moment is Liza Minnelli singing Beyonce’s Single Ladies in her throaty voice at a gay wedding, bless her.)

One thing New York girls understand is the power of a good entrance – and a good exit. Carrie, Miranda, Charlotte, and Samantha were remarkable for a decade. Their entrance was formidable and magnetic. And now, while we can still remember how great they were, it’s time to exit, stage left.