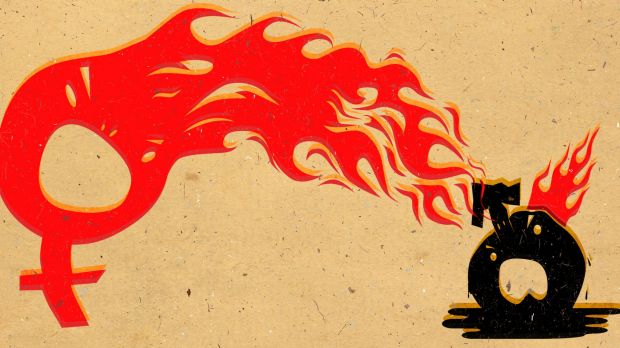 It’s quite apt that the term “flamethrower” is so often used to describe feminist Clementine Ford.

The first time the modern flamethrower – or Flammenwerfer – was used was in an act of war, fighting against men. The Germans used it often on the western front during World War I, though it was limited by the fact that it could only be operated from inside a trench: you had to hide to fire one.

Flaming, torching and destroying are not the techniques usually employed by ladies. But in recent years the abuse and verbal violence women have experienced in the real world has shifted to the virtual world, and is getting worse. Subterranean trolls savage women – and, less frequently, men – often from the vantage of cowardly anonymity, forcing many to be silent, to back down or repress opinions. It’s a peculiar kind of backlash whereby the moment we earn the right to speak, or a place on a public stage, we are booed and shooed off a virtual one.

This is feminism’s final frontier: technology.

And you can find Daily Life columnist Clem Ford out there on it daily, flaming, hurling obscenities at, and ridiculing, men who troll her. As she outlines in her new book, Fight Like a Girl, her methods of combat are clear: don’t retreat, don’t resile, and force others out of their trenches by exposing, insulting and laughing at them (and, say, their penises). What Ford has discovered is that online, ridicule is her most powerful weapon.

I don’t need to list all the profanities and insults hurled at her – like, say “unrapeable, pig faced slut” (what kind of insult is “unrapeable”?) – as they are easily discoverable. But they include “Misandrist. Man-hater. Feminazi boner killer. Joyless harpy. Dumb fat cow. Ugly femmo sour faced bitch who’s only angry about rape because no one would ever rape her.” And so on.

It’s a technique that has become hugely controversial, and has been enormously successful in galvanising women.

For the one thing her devotees and detractors have in common is intensity. Both display fervour, both closely scan and document her words, both cheer and jeer at equal volume. Which is loud.

I was struck by that last week, when Ford walked on to the stage in Melbourne for the launch of her book – which had sold out days before – to sustained roars and applause. The book contains a raw, mutinous account of her life – her anxieties, eating disorders, abortions, insecurities, triumphs – the path of her feminist enlightenment and her call to arms. It is marbled with both anger and nonchalance about abuse. As she told Twitter: “I dipped a quill in the inky ocean of male tears and wrote an angry manifesto.”

Backstage her seven-week-old baby boy sat with his father, waiting for his next feed, interrupting his mother with the odd ghostly howl.

It has been a long time since a feminist in Australia was so polarising. And since a feminist refused in any way to acknowledge the importance of support from men – do they need medals for doing the right thing, she asks repeatedly. Are they really champions or heroes? Why do we need to worry about applauding men for getting their feet off our necks?

For Ford, the crucial task is stirring women, and reminding them of their strengths. To her, trying to persuade men would be merely a process of painting radical views vanilla to placate those who will not willingly relinquish power. So she writes for women, describing her book as “a love letter to the girls”.

“It’s a letter to the bitches and the broads, the sluts and the whores,” she says. “It’s to the troublemakers and the rebels, the women who are told they’re too loud, too proud, too big, too small. Or not enough of anything at all. ”

Her message to women is to find a supportive “girl gang” (hers threw flowers and a maternity bra on to the stage), refuse to shrink, eschew self-hatred, be open about abortion, “shrug off all that toxic noise” and don’t fear retribution.

And primarily, she argues that it is OK to be angry, to block, walk away and ignore or stay and yell back.

But it’s not just men who are hostile.

This week, some women – including those who admire her – have told me she makes them uncomfortable , too. Some are scared of incurring her wrath, or contempt for disagreeing, or being a different kind of feminist. On ABC TV’s The Drum, News Corp’s Sharri Markson accused her of being a troll herself, of abusing men and women – like Miranda Devine – on Twitter. And Ford does sometimes attack women, including, bafflingly, the likes of the delightful Mia Freedman, a publisher and writer, who is a consistently staunch and loyal supporter of women. Ford told Markson her attacks are only ever in response, but they do expose her to charges of inconsistency.

Regardless, what Ford does best is make us think.

What she has exposed  is that old hatreds of women have condensed on new screens like poison, and as they enter our brains through social media we can carry verbal assaults with us everywhere, in our pockets and into our bedrooms, and this nastiness and grotesquery can shadow our lives. It’s technological warfare.

And the rage she provokes shows how important she has become: large crowds swarm around fresh thinkers for a reason.