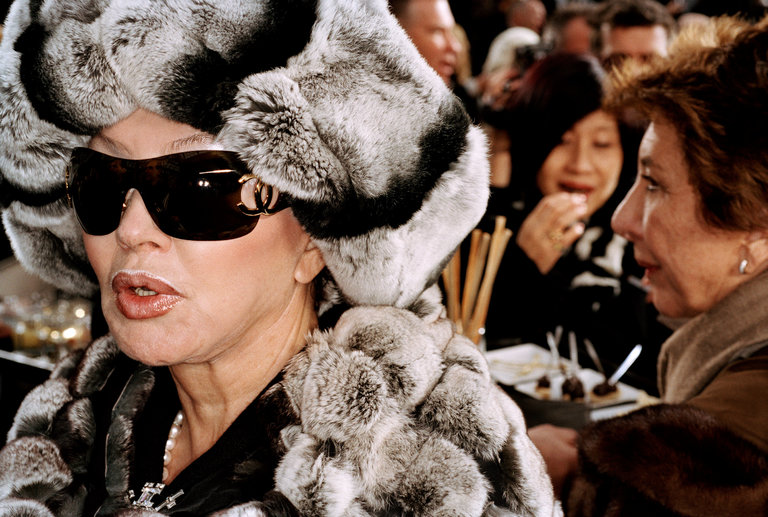 SYDNEY — Once, while I was looking at an apricot-colored vintage dress at a stall on the Upper West Side in New York, imagining myself in it, drinking gin cocktails on the Riviera, my former partner whispered in my ear: “You know, there comes a day when wearing old-lady dresses is no longer ironic.”

Ouch. I was 36. And apparently not even a lamb dressed as mutton, but fast approaching mutton dressing as jerky — if we accept that the way women dress can be likened to the life stages of a sheep.

Deflated, I left that pretty dress hanging on the wire fence surrounding those markets on West 76th. But I still wear vintage.

So what does it actually mean to dress like an “old lady”? Or even just “dress your age”? Women are more often criticized for dressing like younger, not older, versions of themselves. When you reach 40, you’re suddenly inundated with advice about “age-appropriate” wear.

It is worth pointing out that one of the first recorded uses of “mutton dressed as lamb” was to praise, not ridicule, hot older women. The phrase is attributed in a lady’s journal of 1811 to the future king of England George IV, who, when still a prince, was asked at a ball if he found a particular girl pretty. He snorted with derision: “Girl! Girls are not to my taste. I don’t like lamb; but mutton dressed like lamb!”

Women are not praised for dressing like fabulous young things now. As we ascend the ladder of wisdom and maturity, we are cautioned to adopt restraint, to be “classic,” “sophisticated,” to eschew skin in favor of prim. And with every passing year, to occupy less space and be more demure — and dull.

We are also told to monitor our appearance in a way men are very rarely told to. Find me a man leafing through a magazine that tells him to upturn his collar to hide his neck wrinkles, and I will upturn it for him.

As one fashion guru advised women: “The worst thing you can do is to dress younger than you are.” The worst thing! So bad, apparently, that The Daily Mail claimed that 80 percent of Britons thought women should “start dressing down” when they turned 50. As a result, the survey found that a quarter of women over 50 are “scared of wearing high heels.”

After 40, we should, says a British fashion writer in The Telegraph, use plenty of conditioner on our hair and not risk a radical trim because “a bob at this stage could put a decade on you.” Yikes! The author goes on to say a maxi skirt can also add “10 years.” Which means: Get a haircut and the wrong dress, and bang — you’re 60.

A website named Lifescript also recently chided women over 40 who wore tank tops, low-rise jeans, platform heels, bangles and big earrings with the question: “Are you a middle-aged fashionista who just doesn’t know when to quit?”

Finally, we are told to smile more. “The sulky, not bothered expression which you may think cool (see Victoria Beckham) will in your 40s start to look sour,” writes The Telegraph’s adviser. The answer? “Perk it up.”

This is mutton shaming, ladies, and it has to stop.

Very occasionally, we are given permission to reveal glimpses of our fleshly selves. A stylist in Harper’s Bazaar advises that mutton-ladies may still reveal morsels of skin — collarbones, wrists and the back of the neck are safe “candidates for display.”

“All the places you’d wear perfume and would like to be kissed,” says the stylist. “It’s about being adored, not ravaged.”

Must we give up on being “ravaged”? Or better still, ravished.

All this nonsense is why I adore the funky grandmothers you can find on Instagram who dance about in baubles and proudly sport turbans. They refuse to fade, hide or match their attire to the wallpaper.

But my greatest mutton-fantasy is just to wear and do what I want. To not have such preoccupations even cross my mind. Isn’t there a point when one can simply be a dowager, a grand old dame, or just a merry old boiler? When we can refuse to kowtow to prescriptions and permissions, but just march on in the shoes we fancy wearing?

Queen Victoria ditched those suffocating corsets without blinking, much to the horror of her doctor. Instead, she wore exactly what she liked for half a century: mourning-black, with diamonds. Hillary Clinton is another such, staunchly campaigning on in her pantsuits.

I have long savored the prospect of letting myself go. It’s just the most delicious concept: a balloon wafting into the ether, a raft flowing smoothly with the current. One day, I have imagined, I would find myself wandering along the street, hair askew, unkempt but cheerful, wearing a curious assortment of clothes — perhaps a vintage frock with dapper heels — that meet just my liking.

I might bump into an old acquaintance who would regard me with concern. “Oh,” I would exclaim, with an easy laugh, and, touching her arm, say: “I thought you might have known. I’ve let myself go!”

I would saunter off, dangerously liberated, feeling envious eyes on my back — having reached, finally, the age when you can reject rejection.