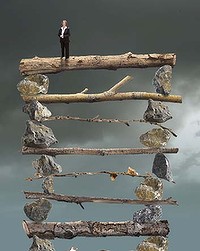 Wouldn’t it have been delicious to have been in the room with the German Chancellor, Angela Merkel, when she was told wiretaps had discovered the Italian Prime Minister, Silvio Berlusconi, had called her an “unf***able lard-arse”? (This from a man who called the US President, Barack Obama, “tanned”.) I like to imagine her snorting with derision as she downs a martini and puts in another call to the Greek Finance Minister. “Silvio! Ha! Dummkopf. Schwachsinnige. Schwein. He could kiss mein lard but I’m too busy sitting on it and working.”

Why would she care? She’s Chancellor of Germany. She has a PhD in quantum chemistry and has chaired the G8. Fuelled by industrial productivity, conservative finances and a high domestic savings rate, her country’s economy is the powerhouse of Europe. Sure, her coalition government is looking shaky right now – but is this because a sleazy Italian politician prefers to bed teenagers? Of course not.

This is the kind of retro sexism female politicians can laugh at or shrug off today – stupid as it is to suggest a woman must still be thought desirable even when focused on other issues such as, say, the collapse of the euro. I am sure Julia Gillard was unmoved when she was named Australia’s second sexiest woman in 2008, when she was Deputy Prime Minister (the first was Jennifer Hawkins).

Every female political leader will, at some point, with varying degrees of offence, combat sexism. It’s pretty much a given. It may not matter, and you may not care; sometimes it may be screamingly offensive, and other times it may not amount to much. But it happens, and given that in the past it has been an obstacle to women even running for parliament – it was only in the late ’80s that political parties began to believe women would not lose votes – should we not at least call it out when we see it?

What we need to know is this: trying to understand how Gillard might be viewed differently to men is not saying she should be judged differently. It is saying that she should be judged exactly the same way they are – on the grounds of ability, performance and delivery. If someone points out that the relentless focus on Julia Gillard’s de facto relationship and domestic life can be distracting and ridiculous, this does not mean that we should not carefully scrutinise the carbon tax, a seemingly ineffective tax forum, or a thwarted asylum-seeker policy. Suggesting that depicting a prime minister having sex under an Australian flag might undermine respect for the office does not mean it isn’t funny, or that satire is not a brilliant antidote to the dullness of politics.

The South Australian Premier, Mike Rann, told me this week that Gillard had “put up with a hell of a lot – unfair, personal, gratuitous criticisms which have nothing to do with her role as Prime Minister or the way she is doing her job”.

But Gillard’s greatest obstacles – a hung parliament, a poll-driven party machine and her own shortcomings – do not include sexism. Her challenge is to persuade the public of her competence and authority, while managing a diverse and demanding group of independents, as well as demonstrating confidence, which she seems to have lost when she gained power. A lot of mistakes have been made. It’s been peculiar, given how charming, earthy and self-deprecating she is in person, to watch her stiffen and shrink, as though afflicted with a form of political stage fright.

Still, anyone who suggests that the fact that she is a woman is not completely irrelevant gets shot down in an instant. “Again and again,” wrote Janet Albrechtsen in The Australian, “sexism rears its outdated head as the knee-jerk reaction to so much about Julia Gillard’s travails.” In The Herald Sun, Neil Mitchell wrote that Gillard was looking “to blame everybody and everything else for her predicament, including, it seems, sexism. And she’s wrong. Australians don’t care about her gender. They do care about her competence.”

Of course they do. But this does not mean that her gender does not exist; that we will not occasionally revert to a centuries-old pattern of viewing women as outsiders in a man’s game. As Donald Horne wrote in A Time of Hope – Australia 1966-72, for most of the 20th century the prevailing culture in Australia meant people saw it as “obvious that men were stronger, more practical minded, less emotional [and] more able to run things than women”. We have, historically, failed to recognise the authority of women. This is something women in public life – and the corporate sector – are still shaking. But you won’t hear Gillard say this – even though Tim Mathieson said people were “bullying her”. The fact that any woman who talks about sexism is accused of pulling out a victim’s “gender card” means few would ever do so.

Will Gillard ever be able to establish authority, given how she came to power? She was not the first to challenge a PM or Premier. Billy McMahon pushed John Gorton off the prime ministerial perch, as did Paul Keating to Bob Hawke, and of course there are numerous state examples: Nathan Rees knocked off Morris Iemma, and Kristina Keneally knocked off Rees. When I asked the former West Australian Premier Carmen Lawrence, our first female premier, about the way Gillard gained power, she laughed: “Well that’s pretty much the way I got in so I can’t complain.” (The crucial difference? The public knew it was going to happen, and the Premier was embroiled in “WA Inc” corruption scandals.) But few agree with the way Kevin Rudd was deposed, especially because he was in his first term; he may yet return.

The great shame for Gillard is that the higher she has climbed, the more removed she has seemed. Arguably the key asset women in politics have had is the fact that they appear humane, approachable and real – unlike the men in suits they replaced, or are surrounded by. Gillard had this in spades. But now, with her stilted speech, she has managed to eradicate this at precisely the time the electorate is deeply disillusioned and calling for change. She has cleverly proved women can play like men, just at a time that we are most sick of the way men have always done politics.