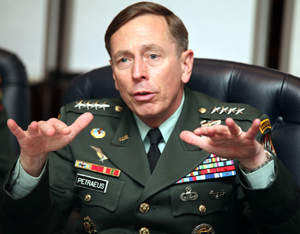 Is General David Petraeus’s liaison with his biographer really worth so much attention? Wasn’t this just two adults having consensual, if illicit sex? It should hardly be surprising if one of America’s greatest generals proved to be as flawed and foolish as other powerful men. After all, it does not detract from his leadership in Iraq and Afghanistan; particularly his crucial counter-insurgency work.

This reasoning is largely why commentators tripped over each other in their rush to excuse the general for just being a bloke. One with needs, dreams and desires. As David Simon put it in Salon, “It’s that men in general are hopelessly and permanently prone to contemplate sex and furtive romance and, sometimes, to act on it. The reasons they do so are crude, ordinary and inevitable.”

The litany of excuses was long. Business Insider quoted an anonymous colleague saying: “You’re a 60-year-old man and an attractive woman almost half your age makes herself available to you – that would be a test for anyone.” Evangelist Pat Robertson put it the best, telling a Christian TV station: “A man is off in a foreign land and he’s lonely and here’s a good looking lady throwing herself at him. He’s a man.” And what’s a guy to do?
So here’s the question: if this is all ordinary, inevitable male behaviour, why are we spending so much time shaming and blaming the women for the fact that the head of the CIA had an affair which compromised his stature, potentially his legacy, and certainly his marriage?

Devoted wife Holly Petraeus has, disgracefully, been blamed for forcing her husband to stray because she committed the worst crime of all: she let herself go.

“The sad thing,” one writer explained on Camera Lucida, “is that Holly Petraeus was pretty as a young woman. I understand the changes that come with age, but her current hairstyle in a ‘young’ bob looks old and unkempt, full of strands of grey. I also understand that weight gain that comes with age, but why not wear more complementary clothes, rather than the ubiquitous pants that middle-aged women seem to think complement their expanding figures? Older doesn’t have to mean worse.”

The widely respected Holly, who has followed her husband around a host of military camps during their 38-year marriage, brought up their children when he went off to war, and now runs the important office for service-member affairs in the Consumer Financial Protection Bureau, was so busy working and taking care of her family that she forgot to vamp up when David came home.
Who knew your own choice of pants could cause your husband’s to vaporise?

But the real villain has been the muscular, A-type, “alpha dog” Paula Broadwell, who has been widely cast as a “slut”. She has been sniped at for wearing tight shirts and pants – or racy halter necks – for pursuing Petraeus to write a biography, for gushing about her subject, exploiting her “special access” to him, and behaving like a “shameless self-promoting prom queen”. Very quickly, she was portrayed as not just sexually avaricious, but odd, abnormally ambitious, driven, and obsessive.

Funny though, no one seems to be asking: Is General Petraeus a slut? Both were married, professionals, both were compromising themselves in a military culture notoriously hostile to infidelity; agree with it or not, if Petraeus had not been retired, he could spend a year in prison under military law for sleeping with a woman other than his wife. This he knew well.

Broadwell knew it too. While arguing the case for more women in combat in The Boston Globe in 2009, she wrote: “Human sexuality will always present a challenge to organisational discipline. But … banning sex is futile and impossible; the best approach is to set rules regarding fraternisation, maintain awareness of relationships within the command, and strictly and fairly discipline transgressors.”

Both knew the risk they were taking, but only Broadwell has been tarred as a sexually predatory lunatic who “got her claws into him”. The Washington Post said Petraeus had just “let his guard down”. It’s odd to see a man whose career has been defined as one of active service seen to be taking such a passive role in an affair that would explode his life. As though he fell on Broadwell while walking around naked one day, snapping her jaws like a Venus fly trap.

We seem to have an extraordinarily low bar for powerful men; especially those who are upheld as role models of integrity and discipline. It is decency, fidelity and restraint that shine in a culture where men of character are too often drowned out by men of personality. As Vernon Loeb of The Washington Post wrote: “[Petraeus] always preached to his proteges that character was what you did when no one was watching.”

He was right. If there is one thing a four star general invested with enormous authority should be conscious of, it is responsibility and honour. He also knew, in a military culture often criticised for turning a blind eye to harassment and rape in its own ranks (an estimated one in three serving female veterans have been sexually abused), that the power balance – he a mighty general, she a younger, first time biographer – was weighted in his favour.

The irony is this: Petraeus took responsibility, admitted the affair as a serious error of judgment and resigned. He lost not just his position as head of the CIA but any future presidential bids. He told an HLN journalist he knew he had done “something dishonourable” and had come forward because he thought that was the honourable response, saying he had “screwed up terribly”.
So, given he has accepted responsibility – and neither party is looking pretty or proud – why are we so eager to simply sheet blame to Broadwell in a cliched “harlot” media meme?

If Petraeus asks for redemption, he will be given it by a nation that is soothed by the sight of a kneeling sinner. If Broadwell does the same, it will be much more reluctantly given. While male adulterers are cursed and puzzled over, female adulterers are stoned and scarred. And every scar bears witness to our own lack of belief in men who won’t roll the dice when no one is watching; or who still believe in honour in the face of failure.