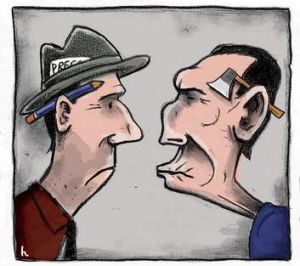 It’s been a blood sport since the 19th century, when, not coincidentally, the rise of the press coincided with the rise of democracy in the West.

But after too many months of bitter accusations of bias, prejudice and lack of “batting for the home team”, it’s time to recall the forgotten figure of the mugwump. The non-partisan observer of politics. Most journalists are mugwumps, though you might not know it from the way we are often described as ideological warriors salivating over opportunities to pursue foes. (A prospect as exhausting as it is fictional).

This does not mean they do not have private views – journalists do vote – but that journalism is a profession and bias is unprofessional. As ABC journalist Jonathan Green put it: “Journalism tainted by conviction just isn’t. That’s the simple truth of it.”

The name mugwump originated with a group of US Republicans who refused to support their candidate, James Blaine, in 1884 because of financial corruption and instead supported the Democratic candidate Grover Cleveland, who went on to become president.

Mark Twain was a mugwump. He described them in his autobiography as “a little company made up of the unenslaved . . . We were not a party; we had no candidates; we had no axes to grind. . . . When voting, it was our duty to vote for the best man, regardless of his party name. We had no other creed.”

Most journalists who spend any considerable period of time immersed in, and reporting on, politics are mugwumps. Mugwumps know there are fools, narcissists and decent people on both sides of politics. That the best of intentions can warp. That, under the full glare of scrutiny, some men and women wilt, some bloom and some morph into something, or someone else. That power does very peculiar things to people. That corruption flourishes in dark corners and spreads when questions aren’t asked. That extracting truth can be like a bloody-fingered archaeological dig. That the process of politics can be farcical, brutal and absurd. That, once or twice a century, a brilliant leader can miraculously emerge.

Mugwumps are also data driven. So what does the data actually tells us about bias?

In 2012, economists Joshua Gans and Andrew Leigh published a detailed study of media bias in Australia in The Economic Record. Using several different metrics for media slant, they found “most media outlets are close to the centre position”. Only one of nine newspapers – The Age – was found to be not in the centre and it was to the left. But here’s the crunch – in the 1996-2007 period, 36 out of 44 election endorsements favoured the Coalition. Media proprietors also donated far more to the Coalition, with a skew as high as three to one.

They also found ABC TV news was slanted towards the Coalition. (Leigh says since this study The Australian has shifted right. He is now a Labor MP but he is not alone in this view.)

A recent study from the Australian Centre for Independent Journalism at the University of Technology, Sydney, found a strong skew towards climate sceptics in the Australian media.

Last month, an independent audit of the ABC – by former 60 Minutes executive producer Gerald Stone – found 93 of 97 stories about asylum seekers did not show bias. A second audit into radio interviews conducted during last year’s federal election also cleared the national broadcaster of bias. The conclusion was that the ABC overwhelmingly meets its professional standards.

So why the ferocity about an alleged leaning to the left? We seem to have confused interrogation with prosecution. We should not need to spell out journalism involves relentless, uncomfortable questioning.

Why don’t we discuss instead the fact that the media are still mostly run by men who are white and middle class?

Of course, not all journalists are fair, balanced and accurate. But those who aren’t are not the lions of our profession; not who we aspire to be or respect.

Mugwumps recognise strengths in both parties. And weaknesses. Both, for example, have been fiscally sloppy, poll-driven and shameful on asylum seekers.

Which takes me to a final point. Are we really to imagine that the only people in this country who care about the fate of asylum seekers are on the left? Both major parties agree on offshore processing. It is a severe indictment of us all to suggest the word “compassion” is inflammatory and not one of the most important of human virtues.

If we have got to the point that to ask how a person was killed or injured while in our care, if pregnant women have access to adequate medical facilities in detention and if locking children up for years behind wire has a lasting psychological impact on them, then we have lost sight of our basic responsibility as human beings. Now there are fresh allegations that guards on Nauru assaulted children; hitting one girl so hard she fell to the ground.

It is not bias to care for the stateless and vulnerable. It’s decency.

And it’s a question of good government. And that’s why we need mugwump journalists.