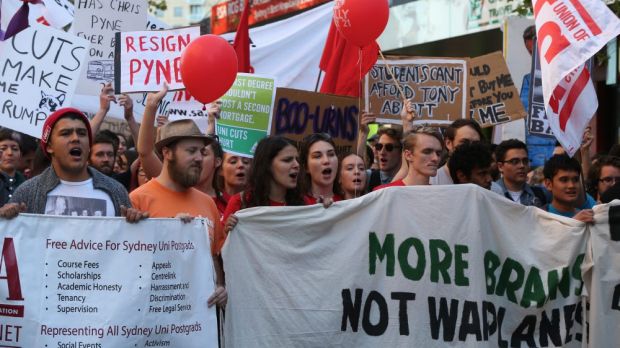 What rot has been spoken about students this week. You’d think they were a pack of rabid, marauding wolves, salivating at the ankles of defenceless politicians.

Not a large group of young people with a legitimate concern about what is happening at our universities and who, in the future, will be able to study at them.

There was near-unanimity from journalists and commentators about a ”disgusting” rabble that was out of control and, worse, ill-mannered. There was a steady stream of contemptuous moralising about the nasty ”yoof”.

Look, I understand some of the mass eye-rolling in the direction of student protesters.

Pushing and shoving, pretty much everyone agrees, is rude and wrong. The footage of Julie Bishop and Sophie Mirabella being jostled demonstrated that.

And while the level of loathing towards Tony Abbott has not quite reached the great heights of the irrational hatred of Julia Gillard, some of its expression is no less absurd.

It doesn’t get much more inane than chanting: “F… you, Tony Abbott”. Or, the alternative, delicately crafted: “Oh f… off, Tony”. Or even the t-shirt reading “Make Tony Abbott my bitch!” Yeah!

Totally! That makes sense! And is also weirdly sexist!

There’s other subtle stuff, too, involving penises and heads.

This is not preaching to the choir: it’s slapping the soloist sopranos on the back.

Come on, people. Loathing and labelling is about as persuasive as a hashtag.

As press gallery reporter David Crowe tweeted: ”Hating Tony Abbott won’t get rid of him. But feel free to burn effigies if it makes you feel better.”

Effigies are always awkward tools; many fail to light or flicker out prematurely, others drop in flaming lumps to the ground.

But they do make a symbolic point. Such is the nature of protest. The rough or violent activists are usually just a fringe element. And most of those who wrote about the student protesters in a dismissive, derisive and patronising way this week failed to recognise three crucial things.

First, protest is pretty much always impolite, uncomfortable and provocative. Protesters who dog massive whaling ships in tiny boats, to stop illegal whale slaughter, or who chain themselves to trees so we remain at the least vaguely conscious of how we are chewing up the world’s resources, deliberately endanger, expose or make idiots of themselves to draw attention to broader, important points. Even though they infuriate people.

Second, the policies that were the subject of the protests – the corporatisation of fees, the affordability of higher education and the possibility of loading future generations with excessive debt – are all critically important subjects in any functioning democracy.

It’s not as though voters were primed for the Abbott government’s dramatic reforms.

When the electioneering Tony Abbott promised to “stop the boats, repeal the carbon tax, build the roads of the 21st century”, he failed to mention that his government would also advocate the most radical reform of the higher education sector since Gough Whitlam abolished university tuition fees in the 1970s. It’s only been in recent months that Education Minister Christopher Pyne has dropped hints into newspaper interviews and speeches.

What we forget is that these students are echoing unease that has already been expressed by many of the leaders of the tertiary sector. They’re hardly ratbag sentiments; let’s not dismiss them as such.

The vice-chancellor of Sydney University, Michael Spence, who has advocated the deregulation of fees, voiced concerns this week that bright students might lose out on places while wealthy students would not. Course costs could triple at top universities, says the education economist Bruce Chapman, who designed the HECS system. The cost of some degrees could soar beyond $120,000.

Mr Spence told Fairfax: “I want the best students, not only those who can afford to pay. It’s the ordinary Australians that I think aren’t getting enough of a guernsey in this conversation … I think you have to be careful that you don’t create a trap where aspirational Australians, not just disadvantaged Australians, will be kept out.”

And just by the by, the government has also cut funding for a host of disciplines. In engineering, environmental sciences, communications and science, the amount lost per student will be more than $5000, according to university modelling.

And we blame students for trying to bring attention to this?

Third, student protests about the undermining of universities are happening globally. And in dozens of countries, students are fighting over increasingly unaffordable university fees, the slow suffocation of the humanities and the growth in the power of the corporate interests in tertiary institutions.

Just this week in North America, Canadians were discussing a new report on the police response to the ”Maple uprising of 2012”, where, one night – after 100 days of protests – 1000 people were arrested. In Britain, there were mass student marches in 2010; the Conservative Party headquarters was occupied. There were also rolling protests in Chile between 2011 and 2013 about the lack of public universities (no new ones have been built since the transition to democracy in 1990).

Do we really expect, after decades of sporadic activism, that students will not protest when learning is under threat? Funding matters, cuts matter, universities matter. They should raise hell! Tell us we’re fools! Slap our often-complacent faces with data about funding. Tell us to listen to their vice-chancellors. Truths aren’t parcelled in pretty aphorisms, they are often told in galling, irritating or even inane ways.

Yet in all the huffing and puffing we forgot that the fight for knowledge, and for the right to learn, is one of the most ancient and important.