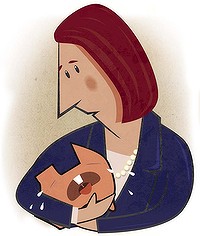 In the televised debate, first up was the former Pennsylvanian senator Rick Santorum, a Catholic, who clocked in with the highest number of kids at seven. Then Mitt Romney, a former governor of Massachusetts, and a Mormon, declared he had five sons, five daughters-in-law and 16 grandkids. Minnesota’s tea party heroine, Michele Bachmann, upped the stakes by revealing not only does she have five children of her own, but she has fostered 23 kids with her husband. But the Texan congressman and doctor Ron Paul, who also has five kids, then threw an additional 4000 children into the ring – admittedly, he only delivered them, but he still claims them as his own.

It was a progeny smack-down. Between them, the six candidates and prospects had 34 children – or 57 if you include Bachmann’s foster children. And 4057 if you include Paul’s babies. The reason these Republicans have been touting their family credentials is, most obviously, to align themselves with politically powerful religious conservatives – who have a higher fertility rate, and generally oppose abortion in any circumstances – and away from secular libertarianism. They will birth a new America. One with high employment, a low deficit and lots of babies. And no Barack Obama.

Yet the kid competition was curious because it is so out of step with most Americans – fertility has been declining for decades in the US and has been held steady only by an increase in immigrant births and babies born out of wedlock. People with large families are often viewed today as slightly odd, or masochistic. Even in pop culture, the fuzzy, warm depictions of large families – like The Waltons, Eight Is Enough, or The Brady Bunch – have been replaced by freak-show reality TV programs featuring the odd Octomom (14 kids) and the bitter, self-absorbed Jon & Kate Plus 8. In contrast, 2004 US census data shows the average US family has 1.86 children. The same is true here, too – the average Australian woman has 1.9 kids.

You might think all of this provides a stark contrast to our political scene, where our first female Prime Minister has no children, and is not married. We pride ourselves on being more secular, and progressive than America. Yet Julia Gillard’s living arrangements are frequently described as somehow suspect, or at least unusual, and her partner is regularly, and unfairly, pilloried. We cannot seem to let up on the fact that Gillard and Tim Mathieson are not married – 60 Minutes asked them if they loved each other recently, this paper took a poll on whether Mathieson should ”stop talking about it and just propose to Julia now” (41 per cent said yes, 59 per cent said no). Journalists grill them relentlessly about wedding plans: Mathieson says he would like to, but would do the asking; Gillard has replied that this is something that you do for ”yourselves, not for anything to do with political cycles”.

Which is fair enough. Why won’t we let up? Why be so intrusive? Because, in truth, Gillard is not unusual. You could argue that she is almost more in line with modern women of Australia than Bachmann is with those in America.

The General Social Survey shows the number of childless women is on the rise globally – and fewer people care. In 2002 most adults disagreed that people without kids ”lead empty lives” – 59 per cent, up from 39 per cent in 1988.

A 2007 Pew Research Centre Study found only 41 per cent of adults thought children were critical for a successful marriage – down from 65 per cent in 1990. Half of those polled thought the fact fewer women were having children made no difference to our society. In Australia, the number of women who had no children increased from 27.6 per cent in 1986, to 40.1 per cent in 2006. (Some of this was due to delaying childbirth – but the number of women aged 40-44 without kids had still gone up from 9 per cent to 15.1 per cent.)

It’s not just the lack of kids but also the lack of a wedding ring that continues to niggle some commentators. In 2011 we still appear to struggle with the fact that a leader can be in a de facto relationship. The most recent research finds de facto relationships are as healthy and happy as married couples in most circumstances – though we continue to assume marriage makes people better off. An Australian study of more than 6000 first marriages performed between 1945 and 2000 found that while decades ago, cohabiting before marriage increased the risk of divorce, now it reduces it.

Rather than being criticised, Gillard should be recognised as part of a growing group of women in Western cultures who live with their partners and/or do not have children – largely through choice (although opportunity and fertility also play a part).

On a global stage, Gillard’s gender makes her unusual as a leader. But her personal circumstances do not set her apart as a woman. What she should be judged on is how well she can lead the country – a massive task she is fumbling.

Julia Gillard might not have delivered 4000 babies, but she’s got 26.4 million of us on her hands now. That’s plenty.