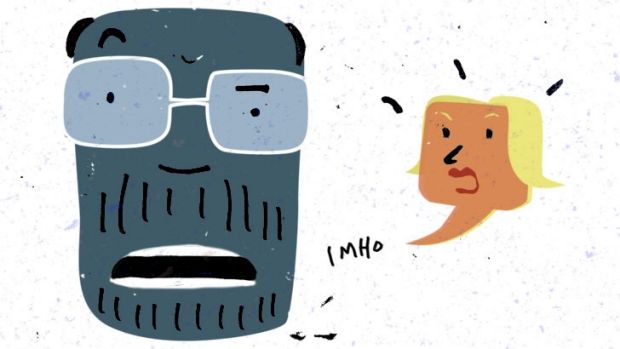 Worse things can happen, apparently, when men speak like women.

In the second century, Greek orator and philosopher Dio Chrysostom outlined the following horrific scenario to a crowd. Imagine, he said, if “an entire community was struck by the following strange affliction: all the men suddenly got female voices, and no male – child or adult – could say anything in a manly way. Would not that seem terrible and harder to bear than any plague? I’m sure they would send off to a sanctuary to consult the gods and try to propitiate the divine power with many gifts.”

If only we could relegate this to ancient history. Even today we see the male voice as more invested with authority. Women try to make their voices deeper when speaking in public; female politicians get voice training so they can sound more authoritative, female broadcasters get criticised for sounding too shrill, female lawyers are told their voices sound childish. Margaret Thatcher was informed her voice was too high-pitched, Hillary Clinton is told hers is “grating” and annoying.

Multiple studies have shown that we expect our leaders to have low-pitched voices.

And it is against this backdrop that women participate in public life.

It goes some way towards explaining the fact that when it comes to news commentary, women have long been much like Victorian children: seen and not heard.

In 2016 most voices we hear in Parliament are male, most voices sermonising from the pulpit are male, and a strong majority of the paid punditocracy on radio and TV are male. Women of course, opine in the millions online, but when it comes to properly paid, masthead columnising positions, the men hog the bulk of them. According to the OpEd Project, women comprise somewhere between 10 and 16 percent of oped writers, TV pundits, Wikipedia contributors and Hollywood producers.

So it’s no wonder shows like the ABC’s Q&A have struggled to find enough female voices. They are there – they are just too often buried. The Ray Martin/Shaun Brown editorial review of six months of the ABC’s Q&A found there were “fewer female panelists and those that were selected were asked fewer questions and permitted far less time to speak”.

This is a far broader cultural question than just one ABC TV show. In a freshly published study, researchers from the University of Bristol and Cardiff University looked at more than 2 million articles collected over six months from more than 950 different global news outlets. What they found was startling: “for virtually all topics and news outlets; women were more likely to be represented visually than they were mentioned as a news actor or source.” (A British study published in 2012 found while women appeared in just a third of the images on front pages, and when they did, it was more likely to be for a new hat rather than, say, a new thought.)

So what do we do? Series producer Amanda Collinge identified some of the reasons Q&A struggles to get more women – women find the show “too blokey”, dislike the online abuse that follows TV appearances, or are reluctant to put themselves forward (while her inboxes brim with “relentless calls and emails from men, bristling with confidence and badgering for a spot”.)

While the show is implementing strategies to try to bring more women on the show – with a 50-50 panelists target and a pledge to record a breakdown of speaking time by gender, more aggressive monitoring of trolls – one of Collinge’s suggestions was sniffed at on social media.

Women, she wrote, should elbow aside any terror or self-doubt: “We need all those talented opinionated women and girls and doubters to get on board. Don’t underestimate yourself and don’t bark from the outside. Get on the panel and spread your word.”

Some tweeted that it was wrong to blame women. And it is. But the reluctance of women to voluntarily stand in the spotlight and voice an opinion is real, and has been complained about by editors in Canada, Britain and America. It is something I have witnessed myself as an op-ed editor, presenter and journalist.

As Margaret Wente, of The Globe and Mail, said: “A lot of men will do anything to get airtime. A lot of women will do anything to avoid it. Women often say they’re not the best person to be on a show. Men don’t say that. Women feel they can’t present themselves as experts unless they have total mastery of the subject. Men just assume they have mastery, even when they don’t. Men have more confidence and are more willing to take risks. They don’t worry that they might look like idiots. Women obsess about that. We go home afterward, pull the covers over our heads and hope no one was watching.”

Non-gendered nerves aside, it is hard to fathom why this is still the case.

One way this might change is if we have more women in senior positions in charge of finding women. This is a task women demonstrably find easier than men. As Judith Warner wrote in Newsweek, “when there are more women behind the camera or at the editor’s desk, the representation of women on-screen is better: Films written or directed by women consistently feature a higher percentage of female characters with speaking roles.” I’d also argue this extends to television.

At any rate, we need a seat at the table. Otherwise we will continue to have men speak on our behalf, which would be more terrible than any plague.