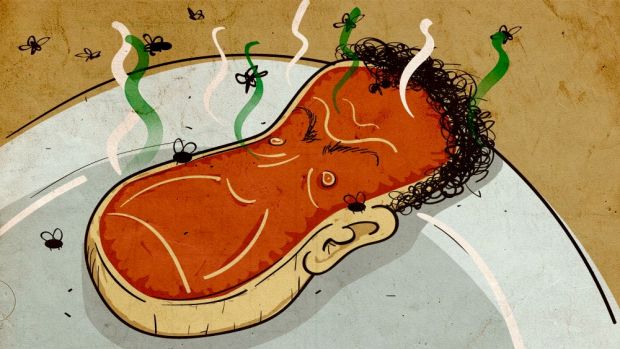 You know that feeling, when you’ve had an exhausting day at work and you don’t get the dinner you want – say, steak and chips – and you just have to punch someone? Preferably a junior employee?

Cause we all do that, right?

How astonishing it has been to watch prominent members of the political and media establishment defend the obnoxious, bullying and possibly criminal behaviour of TV celebrity Jeremy Clarkson after he assaulted a colleague. Even more extraordinary when you consider we are in the thick of what psychologists are calling a “silent epidemic” of workplace bullying. Why let Clarkson get away with it when others cannot?

The BBC conducted an investigation into the “steak and chips” incident in which Top Gear star Clarkson punched producer Oisin Tymon. They found: the assault lasted thirty seconds, only ending when someone else intervened. The verbal abuse continued afterwards. Clarkson used “derogatory and abusive language” for a “sustained period of time” and Tymon believed he had lost his job. The shouted tirade echoed through the hotel.

And so the BBC sacked Clarkson. A brave decision, given the clout of his fame, the commercial success of the show and the fact that a million people had petitioned for Clarkson to stay on. But it was a correct decision; who in 2015 expects to be able to punch colleagues in the face? Those who are powerful enough to hope for special treatment, perhaps.

Some of Clarkson’s mightiest allies leapt to his defence. British Prime Minister David Cameron hoped the BBC might work it out with Clarkson as his kids would be “heartbroken” if Top Gear were taken off air. Rupert Murdoch tweeted that Clarkson was funny with a “huge following”; the decision to fire him, he said, was “stupid”.

Others put it down to a lad being a lad. Former Conservative Party culture secretary Maria Miller dismissed the assault as the actions of a “larger-than-life character”. Piers Morgan explained for us simple-minded folk: “Jeremy’s just like pretty much every other fiftysomething in life.”

Then that arbiter of ethical behaviour Snoop Dogg called on all of Britain to boycott the BBC. The most idiotic defence came from former Tory MP Louise Mensch, who tweeted that the decision proved Britain was “pathetically wimpy”. When asked if she truly thought it was OK to hit someone, Mensch responded: “Yes, I definitely do think it is OK. Between equally matched, and no serious harm done? Yep.”

Russell Crowe surprised no one when he said he empathised, saying: “If he’s been head down, a*se up working and he’s requested one little thing which is to be able to eat at the end of the day then I can understand why he’d get upset.”

This is not about being upset. This is about what you do when you are upset, how that behaviour might affect others, and whether you might be breaking any workplace protocols – or laws. If we are to be serious about workplace bullying, there need to be consequences. (It should be noted that a 2013 report from Safe Work Australia found rates of bullying in Australian workplaces were “substantially higher” than other countries.) The police are now investigating the incident.

A good portion of Clarkson’s comedic appeal is rooted in his candour and prickly pomposity. But he has also often offended viewers and embarrassed the BBC, which warned him about making more insulting remarks. He has called HIV a “pathetic virus”, said BBC executives were obsessed with hiring “black Muslim lesbians” – because we see so many on air – and that he would execute striking workers in front of their families. He asked Nelson Mandela if he’d had a lap dance and said Sarah Jessica Parker looked like “a boiled horse”. He has also used racist epithets against Indians, Mexicans, Asians and African Americans.

But it’s ridiculous to suggest he was sacked for his politics, or to frame it as a (PC, BBC) left versus (free-punching) right matter. Have we not learnt that people get trampled and laws get broken when a blind eye is turned to bullies because they are a company’s cashcow, marquee brand or star performer? For too long, the high-profile have been able to hornswoggle their own bosses and sponsors into thinking they should be immune from the normal rules of life – that oddity, quirks like tempers, rudeness, shouting, abuse and bullying are just accessories to talent.

“Who in 2015 expects to be able to punch colleagues in the face?”

Producers are often particularly susceptible to the big egos of on-air stars, and get blamed and yelled at when things go wrong. The tales of some of the behaviour of the dinosaurs of broadcasting are legendary.

Like millions of others I have always liked Clarkson and I love Top Gear, even if they haven’t devoted enough time to the humble Valiant. Clarkson will be fine. He will go on to be hired by the likes of Murdoch and his celebrity will roll on with some kind of undeserved martyr status, a hero for those who like to speak and punch how and when they want. Tymon will continue to be outrageously and unfairly attacked for some time by trolls and idiots. He will be known as the man who brought down Clarkson; but if he suffers for this, surely others will be prevented from speaking.

You can only hope the BBC’s decision will ultimately weaken the nerve of workplace bullies. It’s bizarre that we need spell it out – it is not OK to hit and bully people. Even if you are rich, powerful and rate well on the box.