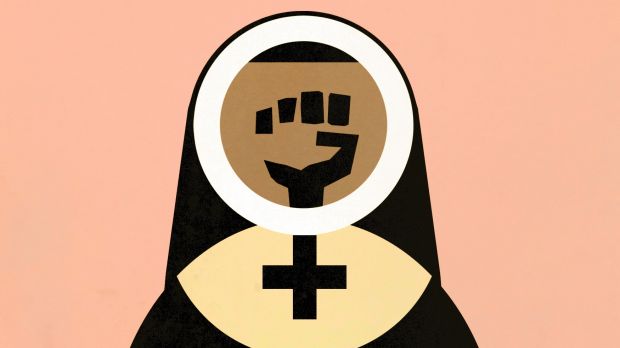 Few seemed to notice, but nuns won a quiet, important victory this week.

Coping with the strong-minded women in his fold was always going to be a fundamental challenge of Pope Francis’ leadership: how could he encourage more women into the Catholic fold, as he says he wants to, while the church continues to refuse to allow women to be priests? Is that an inbuilt disincentive? And how can you embolden nuns to do good work while they are distracted by constant criticism, including charges of being marauding gangs of secular liberal feminists? (Heaven forbid.)

This week a long-awaited report into the way nuns live, work, worship and breathe – or rather “the quality of life of women religious in the United States”, an investigation conducted as part of Pope Benedict’s desire to stem “a certain feminist spirit”, was released by the church.

A total of 341 congregations of nuns were investigated, and they were recognised not as destructive snipers of the church, but dedicated foot soldiers. Not as intellectual threats, but pastoral assets, by a strongly pastoral Pope.

The report showed a pleasing shift from paranoia about nun’s thoughts, to respect for their work. It concluded: “Women religious have courageously been in the forefront, selflessly tending to the spiritual, moral, educational, physical and social needs of countless individuals.”

This was a monumental shift from a 2012 report on the core nun’s leadership group the Leadership Conference of Women Religious (LCWR), which represents about four in five nuns in the United States. The Vatican’s Congregation for the Doctrine of Faith slammed these women for “pushing radical feminist themes incompatible with the Catholic faith.” Their crime was not to have vehemently enough objected to abortion and gay marriage. In addition, they had made public statements that had disagreed with their bishops, who were the true leaders, “the church’s authentic teachers of faith and morals.”

The nuns, for example, had supported healthcare reform, while the bishops didn’t. The women in turn pointed out their vows of obedience were to God, not the bishops.

Francis, who has spent much of his life encouraging people to be humble, submissive, non-competitive and quiet, struggles with what he sees as the “ideology of machismo” in the women’s movement. Equals, he says, is the wrong word: “I am wary of a solution that can be reduced to a kind of ‘female machismo,’ because a woman has a different make-up than a man.”

But this, surely, is semantics. Francis has said previously that women have “the gift of maternity, of tenderness; if all these riches are not integrated, a religious community not only transforms into a chauvinist society, but also into one that is austere, hard and hardly sacred. The fact that a woman cannot exercise the priesthood does not make her less than the male.”

Truly? The point is not pursuit of power, but the removal of barriers and limitations, and a justice that recognises a person’s true humanity and its full expression. Including allowing for tenderness in men.

The report was a relief for the  nuns who had been shocked by the pointed attacks from the hierarchy. But here’s another shocking suggestion: might it be possible to be both a feminist, and selfless?

Of all the problems the Catholic church is currently grappling with, feminism is not one of them. And now that, a reported majority of women identify as feminists, the Church needs to recognise it not as an archaic hairy-limbed beast, but an intellectual tradition rooted in justice and aimed at expanding opportunities and life for women.

“Without embracing full lives for women, the church itself will dwindle.”

Without embracing full lives for women, the church itself will dwindle.

For here is what was buried about the report: the median age of nuns in America is the mid- to late- 70s, and their numbers are dropping significantly. In the mid-1960s, there was a record peak of 125,000 in the country – this has more than halved, to 50,000.  They are now finding it extremely difficult to recruit new members, despite renewed efforts to do so lately. There is simply too great a cultural gap, not just between women and the church, but women and the nuns.

As the Vatican reported, “a significant number of religious institutes are expending considerable spiritual and material energies in the area of vocation promotion. While some of these have since shown an increase in the number of candidates entering and remaining, for many other institutes the results are not commensurate with the expectations and efforts.”

Some have stopped trying to recruit at all, mostly because of “the declining membership and the ever-widening age gap between their current members and potential candidates.” This is because “candidates to the apostolic religious life tend to be older, more educated, and more culturally diverse than in the past”.”

The Pope is a lion-hearted, gentle man and an inspired leader. His recognition of the work nuns do, and the face they show to the community, is a welcome relief.

But for many centuries now the hierarchy of the church has slammed doors in the face of their women and insist women religious be obedient to men. Nuns have found a legion of ways around this. The Pope knows this. Now what he needs to work out is how to foster and nurture that “feminine genius” the report nodded to, not trample on it.