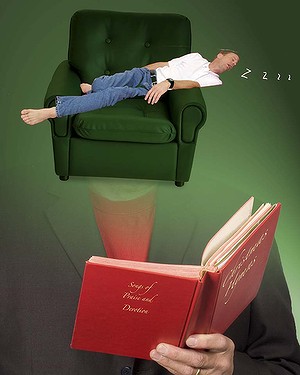 Illustration: Simon Bosch
When it comes to the choice between church and couch, we all know which Homer Simpson would choose (“I’m having the best day of my life, and I owe it all to not going to Church!”). “Heretic Homer” was famous for a reason. Each year, the percentage of Australians going to church slides a little lower. Reasons given include relevance, boredom, time, and disillusionment with church leaders.

But December 25 is the one day many of us walk through the doors of remodelled suburban warehouses, city cathedrals and sandstone chapels near our houses, to sing carols, watch sweet children shuffle through straw in fluffy wings or tea-towel head coverings, and listen to the story of the birth of a child in Bethlehem.

Will we still want to go in 2012? This year has not been good for the PR arm of the global church: the Vatican severely disciplined the gentle, intellectual nuns who are sympathetic to homosexuality – and feminism; the Church of England refused to make women bishops; and Sydney Anglicans told wives to submit. Not particularly tolerant or progressive behaviour. Then the allegations that the Catholic Church – among others – had protected an entire generation of paedophiles in Australia were truly shocking. Some parts of the church – high up, especially – have wandered very far from its original mission.

In this context, it might seem blasphemous to discuss religion on December 25, a day about birth, love, giving and family. But there are still three good reasons even atheists should think about going to church this Christmas.

First, boredom is often good for you. While many ministers provide dazzling shows and insightful talks at Yuletide, some can still drone on with ponderous sermons, and plodding hymns. Charles Dickens wrote of one church experience as like being “steamed like a potato in the unventilated breath of the powerful Boanerges Boiler and his congregation, until what small mind I had, was quite steamed out of me.”

But recent research has shown having your mind steamed out of you can be a good thing. The authors of a paper published a few weeks ago in Perspectives on Psychological Science, define boredom as “the aversive experience of wanting, but being unable, to engage in satisfying activity.” What if a satisfying experience is just sitting and thinking?

In his book Boredom: A Lively History, classics professor from Calgary University Peter Toohey argues boredom can strongly propel creativity: “You’ve got to fall into the deep, the absolute misery, and then something comes out of your brain. A lot of people talk about the value of daydreaming, which can also be the product of boring or mildly boring situations, and your best ideas may come from it.”

This is closely related to the second reason we should go to church on Christmas Day. For many, church is one of the rare times – along with movies or music concerts – that we are able to sit, think, let our minds meander and reflect on who and where we are. You can’t talk, you shouldn’t tweet, and there may be, at certain moments, something resembling silence.

Thirdly, it is important to remember the Christmas story is about everything the wealthy, institutional church is not. It is a tale of two refugees having a baby in a stable. Much like an asylum seeker giving birth in a tent on Manus Island. There is no power, no hierarchy, no sense that God only springs from influence and respectability but, instead, from the margins.

This is religion, as we understand it, turned on its head. It is the story of the sacred and the profane. God, tiny, red, wrinkled and poor, lies in a pile of hay, surrounded by perplexed barn animals. This is why Reverend Giles Fraser, former canon chancellor of St Paul’s Cathedral in London, calls Christmas “a kind of cosmic satire”. It is a story of inclusion, not the exclusion too frequently broadcast by the church hierarchy: news of “great joy for all people”, as the angel put it.

This is why the Bible Society’s video advent calendar featured a host of different characters reading 25 words from the Bible in the lead up to December 25 this year. NRL star Andrew Johns read the Bethlehem prophecy, entrepreneur Mark Carnegie recited verses on the Wise Men’s gifts, an anonymous murderer spoke of the annunciation, and adman John Singleton read Luke 7:34: “because the Son of Man goes around eating and drinking, you say, ‘Jesus eats and drinks too much! He is even a friend of tax collectors and sinners.”‘ An overstuffed Jesus – sounds just like Christmas.
The idea, says the Bible Society’s chief executive for Australia, Greg Clarke, was: “the Christmas story connects with every kind of sinner, such that we are all willing to own it at Christmas time. We all need mercy for our failings or hope for a new start in the year ahead. Most atheists I’ve met want to live a good life, and I still say to them that Jesus is your best model.”
The story of the birth of Jesus was meant to be shocking and disruptive – and is also a powerful reminder of the poor and the displaced, like Joseph and Mary, (as well as the refugees now languishing in the hot, bare tents we have provided for them on islands far off our coast). Poverty is mentioned a staggering 2100 times in the Bible; over and over we are called to look after the destitute and impoverished.

As J.R.R.Tolkien wrote in the letters to his children that he pretended were from Father Christmas: “If you find that not many of the things you asked for have come, and not perhaps quite so many as sometimes, remember that this Christmas all over the world there are a terrible number of poor and starving people.”
You don’t have to go to church to be reminded of this; but if you do go, you should be. If all else fails, you can always have a good kip.